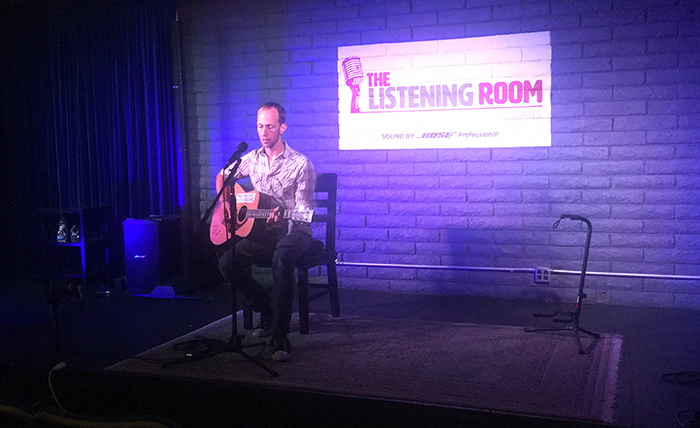 Just as our Songs from the Reading Room series came to its end, a moment of kismet brought us to The Listening Room Phoenix and a new partnership was born. And, to kick off this collaborative effort, we invited Daryl Scherrer of The Blood Feud Family Singers to perform the inaugural song.

Make sure to check out the video of Daryl performing “The Dust with the Dirt” and then continue on to our Q&A with the songwriter!

You can also read up on The Listening Room Phoenix with our interview of co-owner Jim Colletti.

YabYum: So, please tell us a little about the song you chose to perform. When did you write it? Anything prompt its creation?

Daryl Scherrer: I wrote “The Dust with the Dirt” a couple of years ago. I used to make my living in various social work agencies, providing direct services to Phoenix’s homeless population. So I had the privilege of getting to know a lot of people who were living on the street or in shelters, and getting a feel for what their day-to-day lives were like. But it really wasn’t until I left that line of work that I was able to write the song.

I think it was probably a case of needing some imaginative distance from that world, a gap in which to become fascinated and then find a suitable poetry for it. The song isn’t about any actual person, but is certainly meant as a sort of tribute to the kind of moments that could easily belong to actual people.

My hope was to avoid sentimentality and pathos and instead simply tell a story that any honest person ought to be able to relate to: namely, the story of how one’s life didn’t turn out the way one hoped. (A favorite passage from Denis Johnson comes to mind: “I’m telling you it’s cold inside the body that is not the body, / lonesome behind the face / that is most certainly not the face / of the person one meant to become.”)

Of course, since I wouldn’t be me without having some sort of hostile intentions, I also had an inverse hope, which was to confront the listener with precisely the kind of character, the kind of life, that we generally make a policy – both personally and civically – of never having to encounter.

One of the words that gets tossed around a lot in bourgeois liberal progressivist circles is “Community.” It’s been elevated into a kind of spiritual ideal: “Creating Community.” But community isn’t just the people who live next door to you with whom you mutually collude to protect your property values, nor is it just the people you see at the farmer’s market, congratulating one another on being such exemplary consumers. Your community is also the guy who sleeps in your alley. There’s a guy who sleeps in my alley. His name’s Henry. And while he’d still be a member of my community even if I couldn’t stand him, the fact is I find him a more likable guy, and a better neighbor, than half the “legitimate” residents on my street.

Incidentally, my friend Jon Linton once made “The Dust with the Dirt” the official or unofficial theme song for his I Have a Name Project. (It’s a beautiful project that I encourage everyone to check out here.) Other than that, the song hasn’t seen much action, until performing it on your show.

My songs usually come into being like this: I screw around on my guitar one day (a weirdly rare occurrence in my life anymore), just strumming or picking while singing gibberish to myself. If I’m lucky, I happen upon a melody I like, in which case I give the “song” a working title, generally some phrase that kept showing up while discovering the melody, so that I can hopefully remember how it went when I see it on my list of works-in-progress.

Some time later (often a few years), I’ll come up with a line or two of lyrics that I like. (I say “come up with,” but it’s more like I just hear them and become intrigued by their mystery. If I arrived at the initial lines out of any cleverness or calculation they’d probably bore me and feel too belabored.)

Now, it might be that this initial line is enough to get the song rolling. But usually the line, though perhaps lovely, is not enough to tell me what the song is about. I have to wait for another line to come to me. And then, between the two fragments, I can usually triangulate the song; the situation or attitude or posture that would justify those first lines.

“The Dust with the Dirt,” for example: Initially I just had one verse for it (the second to last one). A charming little philosophical aside, sure. And I found the particular brand of truth in it compelling. But I didn’t yet have a character or a context that would justify that reflection. I sat on that verse for at least two years before I could hear the rest of the song.

I used to keep a regular schedule for songwriting. I’d get up early every morning and put in a few hours, sitting in my garage, referencing my list of melodies, groping for the words that might do them justice. But at some point I found myself in a personal crisis regarding music, reckoning with all my unfulfilled dreams of success and stardom and whatever, feeling like a failure, having nothing else to justify my existence to myself.

So I quit the song game for a year or so. I guess I felt that my relationship with it had become too twisted and hateful and poisonous. But the fact is, I only feel good about life if I’m writing. So during that time I rediscovered my teenage dream of writing novels. And it may very well be that a part of my growing older is that I’ve tended to think more and more like a novelist and less and less like a lyricist.

Obviously I’ve resumed playing music. But it’s my novel that I now work on every morning, and I write songs only very rarely. Fortunately, I have a vast back-catalog of unused or underused songs to draw from, which has thus far constituted most of The Blood Feud Family Singers’ repertoire.

One of the greatest compliments I ever received as a songwriter was when a friend of mine told another friend that I was “like a cowboy Leonard Cohen.” It was one of those rare moments when you feel like what you hope and strive for is actually comprehended by others, when you are seen in exactly the way you would wish to be seen. Cohen always represented to me a consummate songwriting ideal: his beauty, his precision, his wisdom, his lyrical scope and ambition. I learned a lot from studying his songs.

That said, Elvis Costello might have been the bigger influence on my writing. The unabashed jealousy, obsessiveness, bitterness and cruelty of his songs is a closer match to the grotesque stirrings of my own nasty little heart. To my sensibilities, “I Want You” might be the most horrifyingly honest song ever sung. (The first time I heard it was in concert. He played it solo. When he sung the line, “Did you call his name out as he held you down?” my body went cold.)

In truth, my own songs probably live somewhere between Cohen and Costello, undecided about whether to grasp after transcendence, beauty and wisdom, or to confess the depths of their perversity, misanthropy and vengeance.

The Blood Feud Family Singers should have a second album ready pretty soon. In fact, I think it’s just a matter of recording Mark (Allred)’s guitar. I record and mix our records at my house, which has sort of become my favorite part of the whole music game.

However, that also means that the recordings take a long time, since we’ll usually just record for a couple hours on Tuesday nights, rather than booking a whole week in a professional studio. Also, I’m really meticulous and obsessive about the mixes, which makes everything take even longer. Incidentally (and immodestly), while there are many better recordings out there, you will not find better recordings produced with facilities or equipment as meager and cheap as mine.

Just to be cute, I call my “studio” Ex Nihilo Audio, since the gear I use is as close to nothing as you can get. My audiophile friends are consistently both impressed and appalled.

Keep up with The Blood Family Feud Singers to hear
more music from Daryl Scherrer.