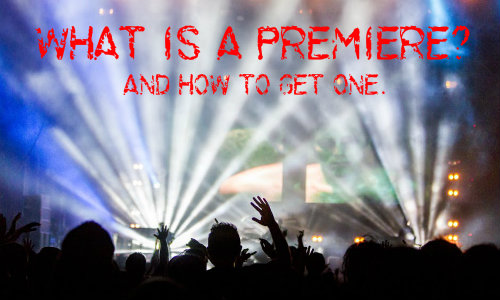 We’ve been getting more and more requests from musicians to premiere singles, music videos, and albums, but it seems like some folks are a bit confused about what a premiere actually is. The editors thought it might be helpful to offer up this short tutorial about what a “premiere” means and how to go about premiering your music through a publication.

First of all, what is a premiere?

Okay, so here’s the big thing about premieres (not premiers): it means FIRST. By its traditional definition, a premiere is the first performance of something. The first showing of a new play, the opening night of an opera, the first episode of that new television program… you get it.

In terms of modern media, a premiere pretty much functions in the same way. By offering a premiere to an artist, a publication expects to be The First to publicly offer the new content produced by said artist.

So, let’s say you have a snappy new single, and a publication agrees to premiere it. You should not share that single PUBLICLY until the publication does. Maybe you email an MP3 to your mom or your boyfriend or something. That’s fine, but we’ve seen blogger complaints that they had to pull a premiere from their schedule because the band didn’t think it was a big deal to “just share it on their personal Facebook pages” with some friends and family.

And, we at YabYum have had to deliver the harsh news that a premiere has been cut because someone (usually the bassist) forgot to make the Bandcamp link private when they posted it.

So, why would a band want to find a place for a premiere? Think of it as an exchange. A publication throws their support behind your single/album/video and wants to premiere it. They are offering to share your content on their platform (and usually write a little something-something about that new release) and, thereby, with the readership they have cultivated.

In turn, you are granting that publication exclusivity for whatever the agreed upon amount of time. At YabYum, we ask artist to refrain from sharing direct links for the first twenty-fours hours after a premiere, but different publications have different policies. And some don’t have any policies in place whatsoever. It all depends.

But, assuming a publication offers a premiere, they should let you know if they have rules regarding that premiere that extend beyond don’t premiere it early yourself by putting it up online [see Section 1].

Basically, do it, like, a lot. Like a hundred times, at least. Hopefully, you can land a YES, but if not, don’t get discouraged. Recycle that press list the next time you have something to share with the public.

One of the most important things to keep in mind when looking for a premiere is time line. Depending on the publication, you should plan on reaching out to them anywhere from a couple weeks to several months in advance of the release.

Some larger, or busier, publications might maintain a more hectic schedule and require more time. Then again, it seems like a lot of blogs these days are comfortable with a speedy turnaround window and might only require a week or two to arrange a premiere.

It varies. And, the way you find out is through a little internet sleuthing. Some publications will have “Contact” or “About Us” pages that will provide you with some useful information about their operation. If not, reach out and ask them. It’s not out of line to ask, “Do you host premieres? If so, how much advanced notice do you usually prefer?” Be bold. Life favors the bold.

I have more questions…

Maybe you’re already familiar with what a premiere is and how to go about asking for one so this was all a little too basic… even though the series is called “Band Basics,” BTW. Maybe you’d like some more in-depth PR tips. We can help you there too.