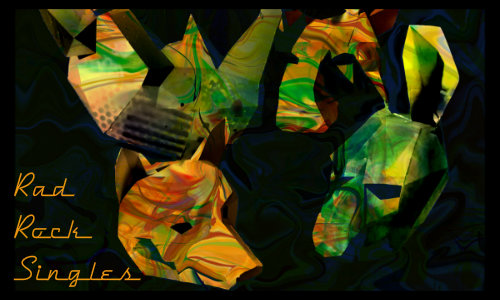 There are hills and valleys on “Photosynthetic” but fans of The Psychedelephants should expect nothing else from one of the band’s musical experiences. They are dynamic; expansive. And that’s just two ways to describe the band’s latest album: Amalgamation. Each track is its own journey and “Photosynthetic” is but one example. It just so happens to be a favorite example so that’s what you’re hearing today. Turn on the black lights and turn off the ringer on your phone before you dive into the complete LP.

Sydney-based indie rockers known as Georgia June dropped this angst-laden gem a few weeks back and I’ve pretty much had it stuck in my head ever since. “Broke” is gritty, catching, and jam packed with painful financial revelations that will strike home with many of us. And, gods forbid you belong to both aforementioned groups, you might as well just make this single your theme song. Thankfully, this band knows how to turn frustration into fun. Get down with “Broke” from Georgia June…

“Slow Day at the Outrage Factory”

Onus Records has a bit of reputation for steadily spitting out some rad, and under the radar, singles. This one from The Breakup Society puts a fun and satirical spin on the Left/Right Machine. But fear not! This is a political song you can dance to. The Breakup Society keeps it bright and bouncy on the instrumental end while the lyrics play out more like Chaplin’s Modern Times with a bit more of an absurdist’s sense of humor. And, double points to any indie rock song that can incorporate the word “kerfuffles” into the lyrics.  Score “Slow Day at the Outrage Factory” through Onus Records here and maybe stick around to poke through some of the other singles offerings available through the local label.

Justin Long, the musical force behind LORD WILLING, might have recently made the jump from D.C. to Hollywood, but there’s some serious desert noir to his sound that should all you Sonoran cats. Intentionally droll vocals are set adjacent to a Lynchian soundscape on “You Got a Hold on Me”. You’ll feel five times cooler than you just for hitting play. This single marks the third track from LORD WILLING’s forthcoming EP, ARE YOU HAPPY?,  so Like/Follow/Etc. to keep up on that release. But, first, check out “You Got a Hold on Me” below…

This feisty single comes to us from Vancouver’s The Plodes and claims to be the “catchiest song about meth dealers you’ll ever hear.” Once you give “Tight Tight Tight” a spin, you’ll agree. The powerful vocals have a Julian Casablancas, but with a little more punk and a little less prep school. The punk hue of the rock (and gang vocals) add to the super fun atmosphere that surrounds “Tight Tight Tight”. This track comes to us from The Plodes’ album, Have One Of Our Nice Yellow Boxes, which dropped this past summer and is available for preview/purchase here.