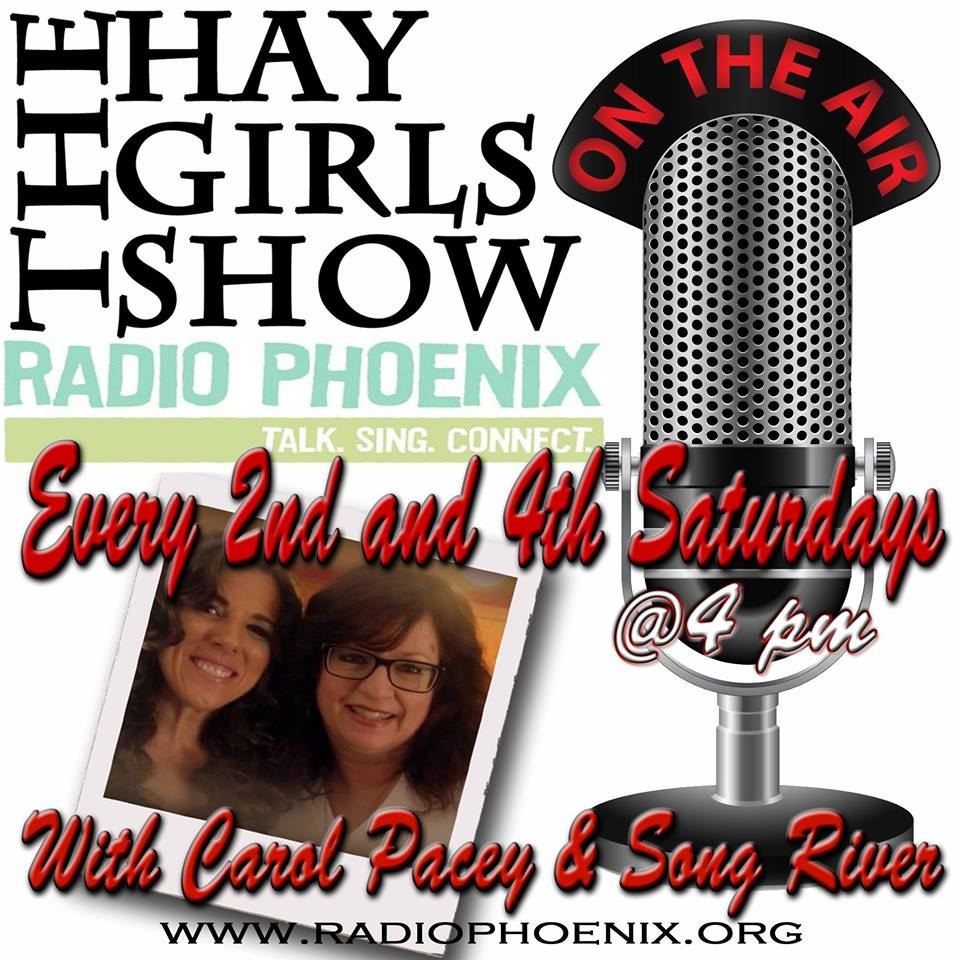 Radio Phoenix, home to The YabYum Hour, also provides air time to a couple of sassy music-loving broads known far and wide as The Hay Girls. Carol Pacey and Song River both arrived in the music scene following very different paths, but together they are a power duo of local music support.

Twice a month, they take over the airwaves from Phoenix Center for the Arts to bring you lively conversation with musicians. Pacey brings her experience as a performer (and member of Carol Pacey and the Honey Shakers) to the conversation while River (of Cowgirlzen Entertainment), with her experience in music journalism and public relations, offers a different perspective.

I had a chance to chat with The Hay Girls about life on the radio and in the music industry. Read the Q&A below and don’t forget to tune in every 2nd & 4th Saturday of the month to listen to The Hay Girls on Radio Phoenix!

YabYum: Both of you came into the music industry on different paths. Mind telling us a little about your music career journeys?

Carol Pacey: When I was in college, I fell for a fellow student who sang in a local college band. I didn’t try singing in a band until after we broke up as I didn’t think I could do it (too shy), but I finally got up the nerve and nearly passed out at my first audition. It was a cover band a lot like the band in the movie The Commitments. I don’t think we ever made it out of the practice space as we had a lot of the same dramas as that band!

Another cover band or two, a marriage and a few kids, and then I decided that I would rather write my own songs, but I didn’t know how to play anything. A few guitar and vocal classes at our Maricopa Community Colleges, meeting the likes of Andy Borunda, and wellah, Carol Pacey & the Honey Shakers, six years strong!

Song River: My journey has been long and absolutely fascinating. I have been blessed to work in all facets of the industry now save one… I can’t sing or play an instrument so my lifelong dream of being a music star has turned to dust.​

How did you two first meet and form the Hay Girls partnership?

SR: I met Carol through her guitarist and our mutual friend Andy Borunda. I asked Carol if she wanted to start a radio show about music and she said, yep!​

CP: I think Song stalked the band for a while…she was already friends with Andy, but we didn’t know each other. Finally, I think she reached out one day and she joined us at a show at the Yucca Tap Room. From there, we stayed in touch via the social media platforms, and then she posted about wanting to do radio again. I had just lost my radio gig at a local internet station so I was thinking maybe we could do something. Song knew Patti Hultstrand of the WOD Newspaper and webzine, and we piggybacked a radio show on her podcast…the first Hay Girls Shows!

What was the impetus behind the creation of The Hay Girls Show on Radio Phoenix? ​

CP: I really wanted the live aspect of the bands so we held live recordings of shows at the Ice House Tavern in Phoenix, but then they closed so we moved to Time Out Lounge in Tempe. At both venues, we continued to have sound challenges so Song and I decided maybe recording live at venues wasn’t a good idea. We were fortunate that Brandon Blaise with DLUX Radio agreed to host our show at DLUX as well as record bands in striped-down acoustic versions. We had heard about Radio Phoenix around this time and thought that it would be a good move for the show, so we moved to Radio Phoenix!

SR: We had been searching for a place to call home. Radio Phoenix offers a solid, dependable platform, and a love for community. Two elements which are important to us.​

How long have you been doing The Hay Girls Show?​

Okay, if you could have any guest on the show that’s out there making music today, who would it be?

SR: I admire so many and if this is my ‘dream’ question… all of them.​

CP: I failed at procuring Frank Turner, but I have hope for the future!

Any particular moments from the show’s run really stand out in your mind? Wacky guests? Superb conversationalist? That time Song overdid it on the coffee and unleashed primal screams? [Editor’s Note: Carly made up the part about the primal screams]​

SR: Honestly, it is Carol keeping the whole together. She is amazing, that stands out in my mind. Other than that each guest brings something unique and I learn every time I listen. Primal Screams??? I do have a problem with euphemistic speech ​(Carol reigns me in).

CP: That time Song overdid it on the coffee and unleashed primal screams?

To be a fair radio show host mom, I love all of our guests the same. I do love when I learn things that maybe I can apply to my band! 😉

So, remind us, new day and time for the Hay Girls Show on Radio Phoenix. When should folks tune into hear you?

CP: We will now be on every second and fourth Saturday, 4-5 pm

What musical guests are lurking on the horizon that listeners can look forward to?

CP: Oohhh, tune in to hear as we always scour the world for musical awesomeness!

SR: If I tell you that… well, POTUS might be upset.​

Listen to The Hay Girls every 2nd & 4th Saturday of the month from 4-5PM.