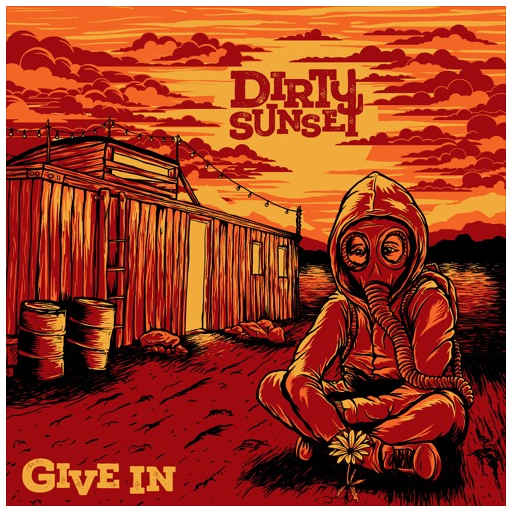 Last month, Dirty Sunset released their debut album, Give In, to enthusiastic fans at Last Exit Live. A mixture of indie and alternative rock along with singer-songwriter and folk influences, Give In does what all great albums do in that it sounds both new and familiar at the same time. Give In is not trying to reinvent the wheel; it’s just driven by really good songwriting.

Juan Pablo Blanco has something to do with that. As both the lead vocalist and guitarist as well as lyricist for the band, so often a band’s worth comes down to what they say. “Got myself a job and I won’t be late, Mama gonna be so proud,” Blanco croons on “Happy Pills”. And later, “These pills turn me into a robot but I think you like it better this way.”

But what is good songwriting without fantastic melodic leads? Luckily Kevin Wiscombe and his violin duties fulfill that need with expertly written and arranged string orchestration. On some songs, I dare say, it even approaches full on fiddle status. Composing saxophone for three songs on Give In as well (played beautifully by David Moore), the partnership of both Kevin and JP is truly the highlight of the Dirty Sunset sound.

However, I’d be remiss not to mention “studio musician gone full bandmate” Chris Chapman on both piano and organ — his handiwork is all over Give In and truly adds an extra dimension to the songs. Tracks like “Angel in Disguise”, “Reach”, and “Give In” show off his impressive skill and I would want him in my band too after hearing the final result of his talents here. Bassist Adam Newbould-Schlund and drummer Thomas Hurley are the rock solid rhythm section of the band and round out the Dirty Sunset sound. They too get their time to shine on tracks like “Take It Slow” and “Mary” but know when to bring it back down for the more acoustic aspects of the band’s repertoire.

I got in touch with Dirty Sunset and asked them a few questions about the band, the new album, and their new “Happy Pills” music video releasing next Monday. Also, there are a few upcoming chances to see the band live including at the Yucca Tap Room on Oct. 26, as well as Rogue Bar on both Nov. 2 and 9, and at the Sidepony Express Music Festival Nov. 11!

YabYum: Where did you grow up or are you from Arizona? Your name, logo, and band imagery all have a very southwest, if not Arizona specific, feel which I think is great.

Dirty Sunset: Thank you! A few of us are Arizona natives and the southwest feel is definitely something we aimed to capture with the artwork. The band was formed in Phoenix and we all have love for our local music scene, also we’re not sure exactly how to describe our sound but desert-rock certainly comes to mind when talking about Dirty Sunset.

How did Dirty Sunset come about and how long have been playing?

JP and Kevin started the band originally as a duo playing originals JP had written. They, along with Adam [Newbould-Schlund] have been friends for several years and knew each other from playing together in previous bands. As the project started to become fully realized, we rounded out the lineup with drums and keys.

Who is the band now currently?

Our good friend Thomas Hurley recorded the drum tracks on the album and plays with us live occasionally. We are looking for a full-time drummer so if anyone out there is interested have your people call our people!

How would you describe your live show and how have crowd reactions been?

In a word, FUN! We do our best every show to have a good time and we think the crowd can feel that. If you’ve never had a chance to catch a Dirty Sunset show, please come on out! We’ll also have a few videos from our album release out soon. We’ve been listening back to the recording from the show and that crowd of a hundred sounds like a thousand! Thanks guys!

Let’s talk about the album some. Could you tell us about Joshua Schmidt and The Record Parlor and the Give In recording process? How long did the album take to make?

Schmitty (Josh Schmidt) was fantastic to work with! He saw the same vision as we did for the album and poured his heart into the project just like another member of the band. It’s just amazing to have that kind of buy in from a sound engineer. We started recording in February of ’17 and the majority of the tracks got laid down in only two days.

I don’t think any of us have been a part of that daunting of a recording project before so we rehearsed 3-4 times a week leading up to recording. We sat down for a long weekend with Schmitty and live-tracked the guitar, bass, drums, and fiddle simultaneously and picked out the best takes for our main tracks. Then over the next couple of months did overdubs for vocals, keys, strings, sax, and djembe.

One challenge was working with Schmitty’s schedule. He moved to Oregon at the end of May so he was fully booked with other artists trying to wrap up all their respective projects. We got everything tracked before he left, but there was a lot of phone tag with mixing the album after he got settled at his new place haha! However, we can’t imagine working with anyone else on this, he really was like another member of the band. Beginning to end, I think it took us 6 months from starting to record to having the final master tracks.

I also want to discuss the album cover. On first look it looks quite apocalyptic but I almost feel there’s optimism in the flower as if the harsh war is done and the Earth once again grows with life. Who did it and did they come up with concept or was based off something the band had in mind?

Thanks! That’s basically it! So we worked with Quinn Murphy of Hamster Labs and all credit for the design and artwork goes to him. He’s superbly talented and has done lots of great work for other bands as well. Check him out! For the overall concept, we wanted this “beauty in the breakdown” type feel because that’s kinda’ the message with our music and this album in particular.

The story we wanted to tell is that sometimes life’s challenges seem insurmountable but we can still find the beautiful parts of life, keep going, and push through. Quinn came up with this post-apocalyptic world where nothing can live and the kids have to wear gas masks to play outside, but there’s promise of life coming back with the single wildflower sprouting up. We loved it and knew that was it as soon as he told us about it!

What’s next for Dirty Sunset? More shows? Maybe touring? What’s this about a music video?

We are premiering our music video for “Happy Pills”​​ next Monday Oct. 23  so keep an eye out for that! It was filmed and directed by Rachael Smith of RaySquared Productions and shot at Shady Park during the Unity Through Community Kickoff Festival. We’ll also continue to play shows around town and maybe do some jaunts out of town for some long weekends early next year. We’ll see how things go and the response we get from this album.

For more info, check out their webpage.