Around most of the country, Spring gets a lot of recognition as a time of new beginnings, but here in the Valley of the Sun, the Fall fills that role. And, once again, our own season of reawakening is upon us.

This past weekend, Arizona Theatre Company, going through a something of a rebirth of its own, kicked off it’s 51st season – it’s first under new Artistic Director David Ivers and Managing Director Billy Russo – with a play that turns its own focus on the blessings and perils of starting over, Neil Simon’s Chapter Two.

Chapter Two is Simon’s 1977 semi-autobiographical story about a writer and freshly minted widower – George Schneider, played by David Mason – finding love again, and mostly against his will, with actress and new divorcee Jennie Malone, here brought to wide-eyed life by Blair Baker.

They are, at various points, encouraged, discouraged, distracted and dismayed in their fledgling romance by George’s brother Leo, and Jennie’s best friend Faye Medwick, with Ben Huber and Diana Pappas rounding out the cast in those roles. Simon wrote the piece as a tribute to his second wife, Marsha Mason, who directed the ATC production.

Schneider, our substitute for Simon, is portrayed here by Mason as a man lost at sea. From his first moments onstage, returning from an overseas trip revisiting the sites of his first honeymoon and holding his unopened mail like he’s can’t quite comprehend its purpose, Mason paints a picture of a life that had once been secure now come untethered.

Schneider’s a funny character, with most of his dialogue coming across like punchlines, and punchlines that land, so it’s to Mason’s credit that his plight doesn’t come off as funny. Instead he seems very much like a man using his humor to keep his staggering grief (mostly) at arm’s length. 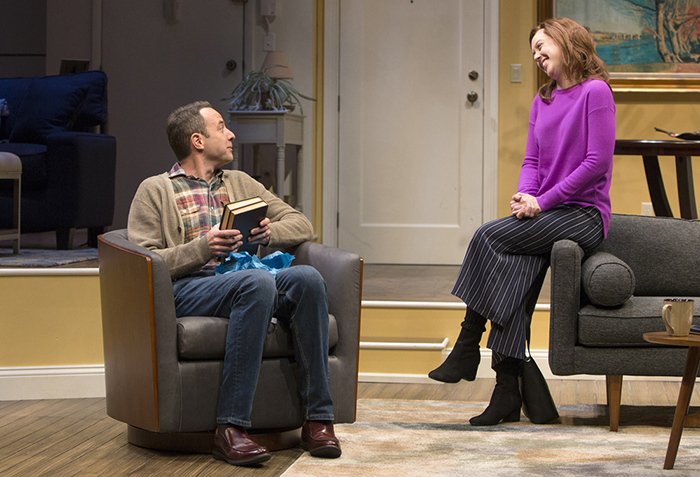 Also kept at arm’s length is Jennie Malone, who Blair Baker manages to endow with a sense of good-hearted optimism and charm without ever coming off as inexperienced or simple. Baker’s Jennie has experienced her own share of heartache and has clearly made the conscious decision not to let it callous her.

There is a tension in Baker that creeps its way throughout the theater during her performance – a disparity between the strength of her conviction to be sunny and her own growing awareness, as well as ours as the audience, of the fragility of her outlook in the face of the struggles she and her heart face. The charm Baker imbues Jennie with is, in the same moment, both admirable and adorable and serves as the mortar binding the show together.

Though Mason and Baker make the strongest impressions, they are supported ably by the rest of the production around around them. Huber and Pappas, as George and Jennie’s respective foils, are given less to do, but each finds their own way of making an impression, with Huber attacking every moment, dramatic or comedic, with an infectious zeal and Pappas’ Faye serving as the most lived-in and authentically motivated character in the ensemble.

The action moves quickly between George and Jennie’s New York apartments, and Lauren Helpern’s efficient set design allows segues to flow smoothly without ever feeling disjointed or whiplash-inducing. Director Mason has deftly interwoven these elements into a production that doesn’t announce itself with crashing drums and flashing lights, but instead insinuates itself subtly, like a romance you weren’t expecting.

Chapter Two is quintessentially Simon, a mile-a-minute string of wit and self-deprecation wrapped around an unflinching examination of the uncomfortable and awkward, a cinder block at the center of a goose-down pillow. Disney and the Hallmark Corporation have built their business on the notion of love as a one-and-done thing that lasts forever, but ATC has built a fine case for believing in second chances, and in so doing, provided a love story for those of us who’ve found – or still hold hope that we will – something messy, complicated, hilarious, and beautifully less-than-perfect the second time around.

Things are looking good for this new season under new management at ATC, and that makes me excited for their next production, a tale blending Brazilian folklore and lyrical storytelling exploring love, regret, and longing titled The River Bride. For information on this, and the other shows that will round out ATC’s 51st season, be sure to check their website.

But don’t miss Chapter Two, which runs through October 22nd. Tickets can be found here.