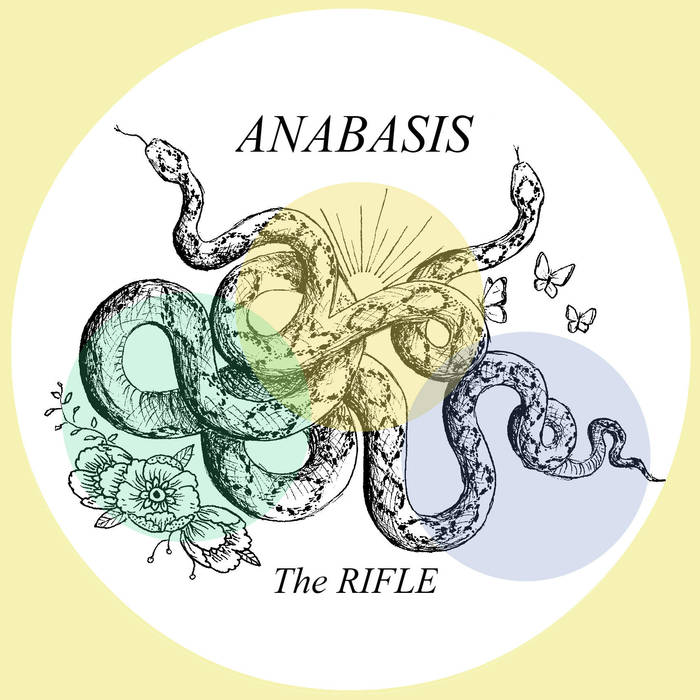 The Tucson band known as The Rifle is a welcome addition to the Arizona music scene and their new album, Anabasis, proves a testament to the emotive power of desert rock.

Their new album, Anabasis, is a definite Must Hear. Combining the singing-songwriting talents of Nelene DeGuzman (which were featured recently on her debut solo album Rib to Rib) with the support of the full band’s desert garage sound awash in reverb and alt swag.

Opening with “Kill Your Darlings”, The Rifle throws it back to the very first track off of Rib to Rib — this time with a whole lot more pep thanks to rhythm section of Randy Rowland (drums) and Kevin Conklin (bass). Nelene throws down some serious guitar work too, the final lead sounding like something straight outta surf music’s heyday. It rocks.

“Hidden Knives” breaks the sound way down, showcasing DeGuzman’s blues talent quite nicely before “Lacuna Luna” ramps the energy back up with it’s 60s pop feel. “Rosemary K.” is another personal favorite from the album, showcasing Nelene’s serene vocals as the song builds in tension all around them.

The Rifle re-recorded the first song off their Spill EP as well, this time turning the jangly alternative of “Skeletons” into a 50s feeling melodrama. “The General”, with it’s alternating chorus of “Will you lay down your arms?” and “Will I waste all my days?”, may just be my favorite on the album, that walking bass line throughout completely solidifying my opinion.

There’s plenty of other Rifle tracks to learn and explore so I must insist you dive in and explore Anabasis on your own. But, first, I asked the band some questions about the new album and what’s coming up on The Rifle’s horizon…

YabYum: It’s been a little over 3 years between when we first covered you (and your Rib to Rib album) to now. Tell us what it’s like transforming from a solo bedroom recording project into a full band experience? (Must be awesome.)

[Nelene] It’s been really awesome. There’s been a lot of growing and evolving together. I’ve been lucky to have found our current lineup pretty early on, there were a number of member changes at the very start but for the vast majority of the time that The Rifle has been a band, it’s been me Kevin and Randy. We’ve been able to stay insulated in our little musical world and really find what works for us in terms of collaboration and kind of influence each other for the better.

There are some aspects that have stayed the same though. We usually write the music collaboratively but the lyrics and vocal melody I still write on my own. That part of the writing process, writing and re writing lyrics, singing things to myself and trying to find the melody that feels right, is very much the same. 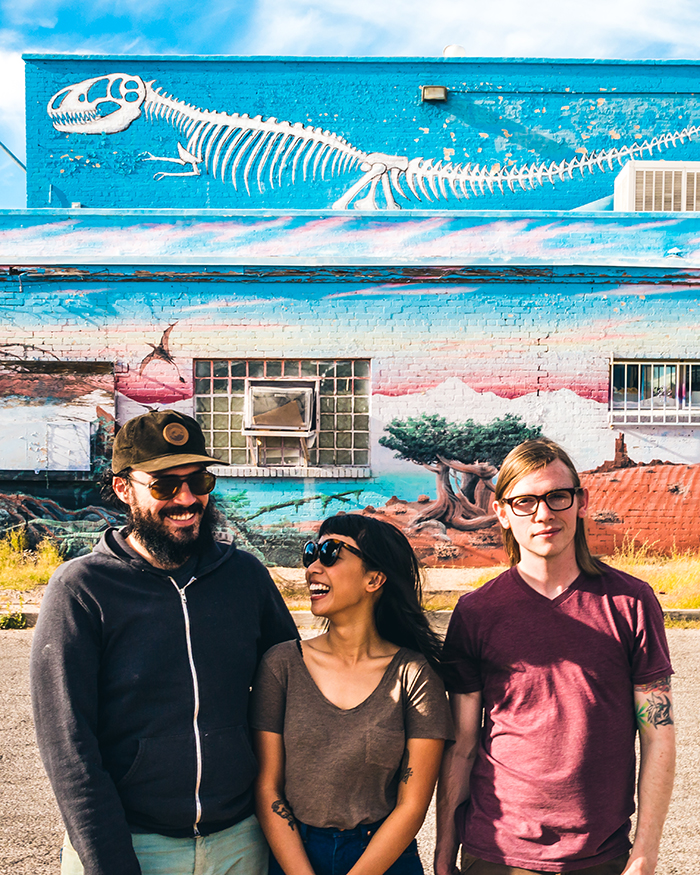 How did you meet your band mates?

[Nelene] I found Randy just from posting on Craigslist looking for a drummer. Kevin and I had been in a long distance relationship for most of the time that I was writing and recording Rib to Rib. After Kevin moved out to Tucson and hung around for every practice, he finally took up the bass and joined the band.

Are you an AZ/Tucson native? Your music falls into a long line of incredible output from the area…

[Nelene] Actually, none of us are Tucson natives. I’m from Redding which is a smaller town in Northern California. Kevin grew up in San Diego but he and I both lived in San Francisco for a number of years before coming out to Tucson. Randy is from Vancouver (WA) and used to play in bands in the Portland music scene.

[Randy] Compared to the Portland scene the Tucson music scene is way more close knit. It feels a lot more like a community and less like bands have to compete with each other.

[Kevin] I’ve never played in bands before but learning about all the cool music and people out here playing music is really astounding to be around.

Do you guys write all the songs together or are they all expansions of your own individual songs? Perhaps some of both? Some of the songs off of Anabasis I recognized off of Rib to Rib! It’s great to hear ’em fleshed out…

[Nelene] For the most part we write songs collaboratively, occasionally we’ve sort of re-interpreted/ fleshed out some of the solo Rifle songs which is always really really fun.

[Kevin] We take extended jams a lot during rehearsal, and record our practices. Little strands come out here and there, and Nelene tinkers at home with them. Eventually we just listen until it sounds right to us.

Would you care to fill us in on the history behind the album title, Anabasis?

[Nelene] I feel like a lot of aspects of my life have changed for the better after each consecutive move I’ve made. I grew up in Redding which is this super conservative, mostly white town in central California. There are lovely people there, as there are everywhere, but the vast majority (or maybe just loudest of the population) were really close minded and espoused the kind of insidious casual racism that I didn’t even fully understand or recognize until I moved away and felt what it was like to not have to deal with constant microaggressions every day of my life.

The liberal attitude and cultural diversity of San Francisco were a welcome change to say the least, but I was also a full time Biochemistry student at University of San Francisco juggling two jobs — one as a barista at a coffee shop and the other as an undergraduate researcher in an inorganic chemistry research lab. The city was an amazing and inspiring environment but I was just exhausted all the time and had zero free time to put towards music and art.

When I finally moved to Tucson, suddenly I had the shock of only working Mon-Fri and having weekends and evenings to myself. That’s when Rib to Rib was made. I just feel like the long process it’s taken for me to get to a really good place, emotionally but also geographically/economically, where I’m able to devote my time and energy to making art that I really really care about has been this crazy journey and a lot of those feelings are captured and reflected on in the songs.

The whole process of writing and recording the album felt like a journey in itself so when it came to naming the album, “anabasis” just felt right (anabasis is an ancient Greek word describing an epic journey from the coast of a country into the interior). 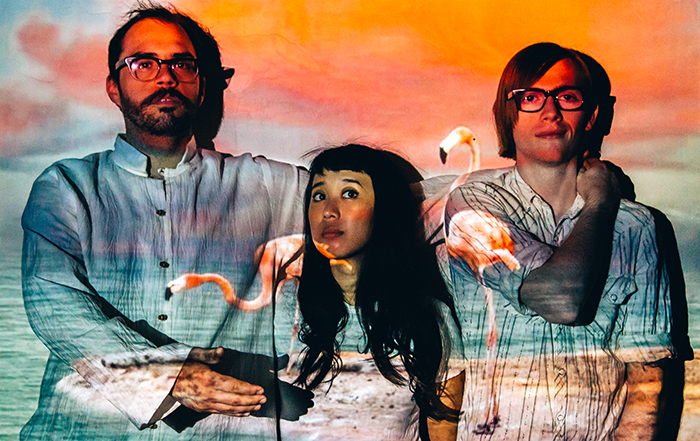 You went to Matt Rendon’s Midtown Island Studio to record your second release, the Spill EP, as well as your new full length. How did you connect up with Matt? It seems like some of the best albums coming out of Tucson (and beyond) right now are recorded there…

[Kevin] I had just joined the band like a week before that recording session (Spill EP) so I connected with Matt purely as a reference and I didn’t quite know what I was getting into. I did know that Midtown Island was billed as the most primitive recording studio in Tucson and that he had a knack for analog recording.

[Nelene] I think we just had such a good experience with Matt the first time, he’s such a great collaborator, that we really wanted to do the full length with him too. We just really love him and we love working with him.

I think it’s awesome the tape was released through Baby Tooth, and again, I think they release some of Tucson’s best output. How did you hook up with these cats?

[Nelene] Matt recommended them actually, so I just shot them a message after the first recording session with some of the rough mixes. They were super supportive from the very start. They are just really really awesome people who are passionate about music and they do a lot to foster the Tucson music scene. I honestly can’t say enough about how awesome the Baby Tooth guys are.

How about the album art? Who did it? I think it’s pretty darn rad.

[Nelene] Me! And thank you! I drew the snake/s just with pen and pencil, then scanned the image and did the color and text digitally.

[Kevin] When I saw Nelene drawing the art I was like oooooooh dang. Nelene had me put together the layout for the cassette.

[Nelene] I love the cassette layout. 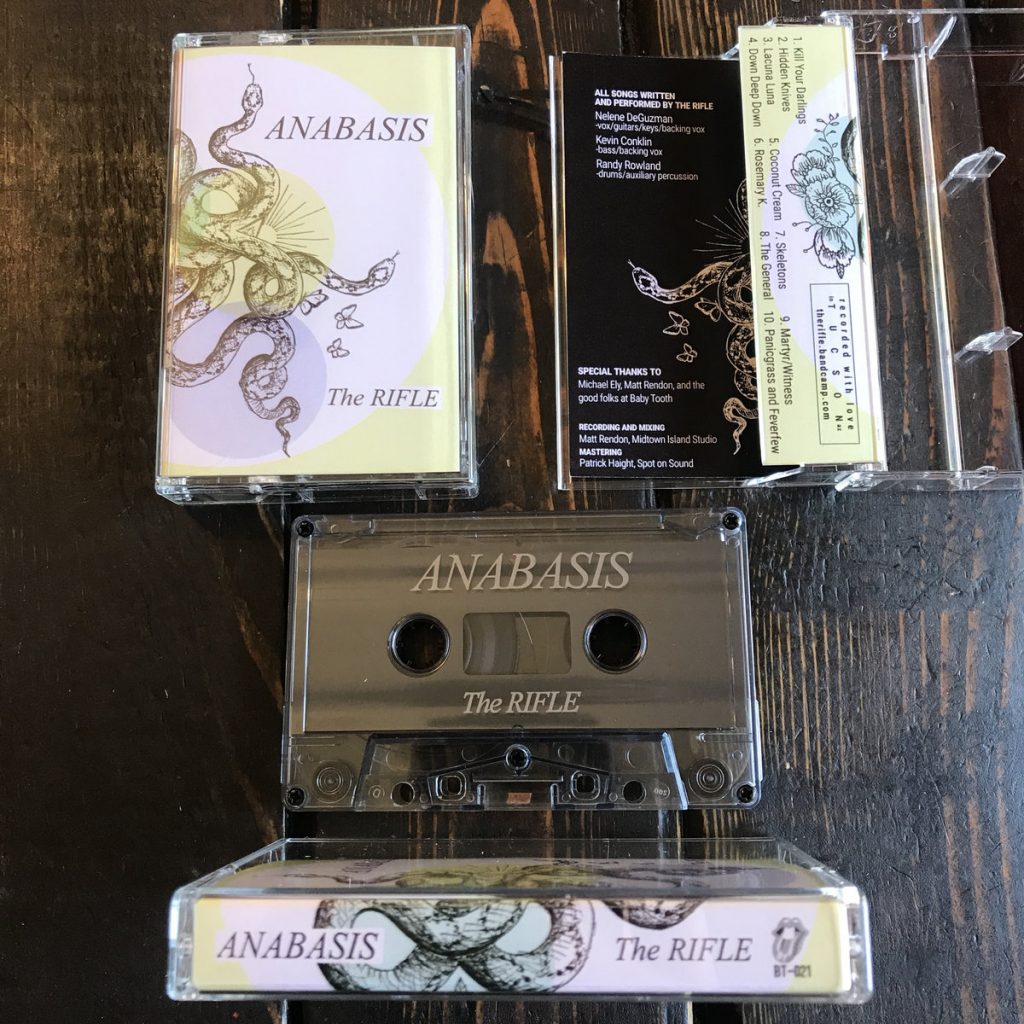 Is there anything about the new album or yourself/band that I failed to ask that you would want our audience to know?

[Randy] We just really appreciate the support we’ve received so far and we’re really excited to start working on the next album.