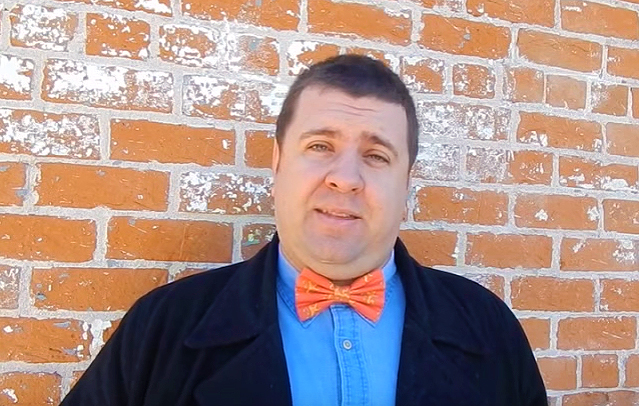 On September 8, writer and performer Ashley Naftule’s play, Ear, opens at downtown Phoenix’s Space 55. Running through October 2, this show will be the last Space 55 event at their longtime location. The building has been sold, so the ensemble is currently seeking new digs.

Naftule is an integral part of Space 55. He co-created their Hollis’s Traveling Treehouse series, coordinates the regular 7 Minutes in Heaven and 9 Muses shows, and has acted in several productions, from King Lear to Monsters, Mutants, and Other Tales of Love.

He writes regularly for Phoenix New Times, both examining and covering a variety of arts and culture events and performances. He’s also been featured on the satirical site, HardTimes.net, as well as PhxSux.com. He also writes about movies for downtown movie hub FilmBar’s blog, and has been published by Four Chambers Press.

And all the rad chalk art at Space 55? That’s him too. Clever and cool drawings spill out of him nearly as often as the many articles he pens on the regular. The Arizona native includes those drawings in his ultimate trio of creative output. “Writing, performing, and chalk drawing – those are my three favorite things to do and I feel that I’m good at them.”

He adds that writing and being creative gives him balance, as like many artistic folks, his thoughts are continuous and rapid – he channels that energy into experiencing culture and creating things that he’ll hope others will enjoy. Even though many folks have sought greener artsy pastures in cities like New York and Los Angeles, for now, Naftule is busy enjoying the Phoenix arts scene and its cross-pollination. 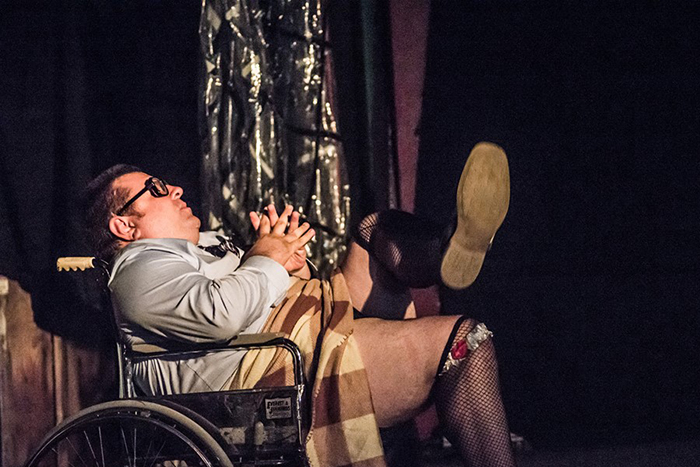 I had the opportunity to sit in on a portion of a read through of Ear, as it was still being cast. The unique play takes Van Gogh’s classic expression of love – chopping off an ear and giving it to a lady – but moves past that foundation in some very twisted, humorous, and intriguing ways. The ear’s recipient begins to hear some interesting conversations coming from the hunk of cartilage. While that’s happening, the boy who gave her the ear is in the mental hospital with a doctor so nutty, it makes him look sane.

Even at just a partial portion of the reading, it was impressive how Naftule’s words easily brought the work to life – they made it effortless to visualize. He has a strength in his ability to develop dialogue and masters the ability to cleanly mash together old philosophies, elements of current culture, and subcultural nuggets to create a really fluid narrative. The characters and their personalities are strong and complete.

I got to chat with him about his history and about this new production.

Amy Young: You are a prolific writer. When did you start writing?

Were you writing sci-fi, since you were such a fan?

No. Initially, it was mostly bad poetry, like god-awful pretentious shit. You look at Rimbaud, like really young, great poets and think “how can you be writing this, and you’re not even 20?” That shouldn’t be allowed!

I feel like every writer – and probably lots of non-writers – have some old poetry they hope never finds the light of day.

A couple years ago I did a poetry feature at Practical Art. I found a binder of my old high school poetry and did a 20-minute set where I read from that. It was hilarious, people loved it but I was dying inside. I didn’t read it ahead of time, so there was no prep involved. I’d written a poem about Joey Ramone, it was so painful. Why, at any point, did I think that was okay (laughs)? 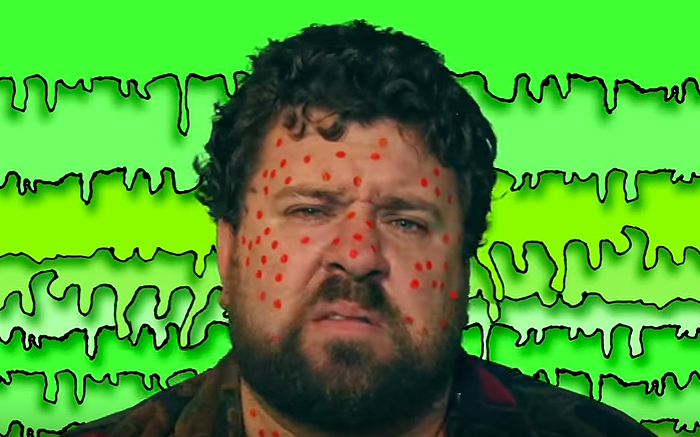 Are you empowered by working out of your comfort zone?

Absolutely. That’s really what got me started performing in the first place. I never really had theater ambitions. A few years back, I did it more as a challenge to myself, to see if I could get in front of an audience and do something and not dissolve into a puddle of nerves.

I’m guessing it went well, since you’ve stuck with it.

I did it and it felt good. There’s a book by Anthony Alvarado called DIY Magic: A Strange and Whimsical Guide to Creativity that has been inspirational. He also wrote a magazine column that explored Counting Coups, which was a Plains Indians practice of touching an enemy as an exercise in bravery. Alvarado expands on that practice and how we can do things to challenge ourselves in order to increase our potency as a human being and build up or esteem and honor in society.

If you look at older cultures, it was more about what you did than what you have. With modern culture, it’s all about what we own. In older societies, you slayed a cyclops or scaled a mountain. I try to think of performing, in part, like how Alvarado interpreted that Counting Coups philosophy. I’ll try anything. If it goes well, that’s great. If not, then it’s a lesson learned. I just kind of escalated it from there.

Can you give an example?

Sure. A few years after I started performing, I did a whole solo show at Modified Arts which was me doing an hour of a Spalding-Gray-style performance. That was kind of ridiculous for me but I did it. I’m motivated by things that make me uncomfortable.

You studied film, too, right?

Yeah. It’s funny, I went to ASU for a while in my 20’s and I had to dropout due to some family stuff, but I got really into film. I had a job at a bookstore and I used to spend a huge part of my paycheck on Criterion Collection DVD’s. I had an apartment in Scottsdale and I just read books or watched every foreign film I could get my hands on. When I went back to school, I went to SCC to study film. I took some film editing classes and quickly realized that was a nightmare, it’s so tedious, but in a roundabout way it got me back into writing.

Writing was pulling you back.

I was thinking about doing scripts and writing for screen and I found out that Kim Porter was doing a theater writing workshop at Space 55, which I’d been to once. So I took her class and that got me back into writing. I was already spending more time downtown going to shows at Trunk Space, but I didn’t yet have the ambition to perform. Being in Kim’s class doing playwriting which I never thought I’d ever do in the first place, that opened up this ability for me to write things I’d never written before.

You studied improv, too, yeah?

I also started taking improv classes around that time just for the hell of it and I was awful. I just did not have it right off the bat. It took me awhile to get into that head space. I’ve performed with improv and I enjoy it, but I feel like for most people who do improv, it’s their first priority and I just don’t have the time to devote to it. 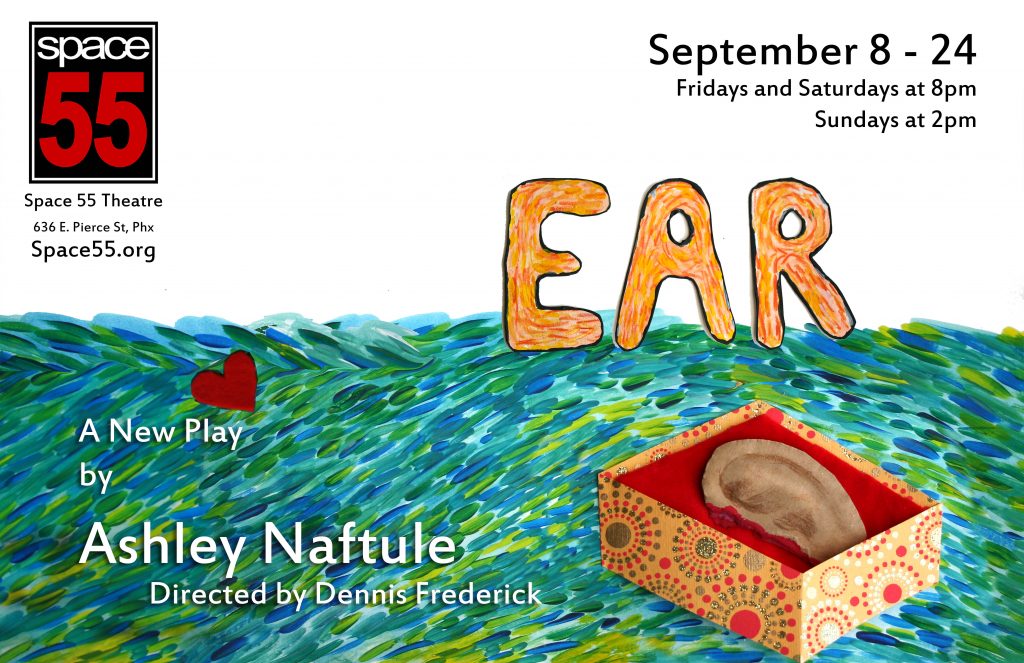 Let’s talk about Ear! How did that develop?

Well, a couple things inspired the play. The band His Name is Alive has a song called “Ear,” and it’s about Vincent Van Gogh. I was listening to it when I was driving and what I liked about it is that it’s kind of menacing in the lyrics but the singer also has kind of a girlish voice; I liked the mixing of those tones – and I like that type of the feel in the play. And also, I like the first scene in the play — a guy giving his girlfriend his severed ear and treating it like it’s a common, relatable occurrence.

It’s like giving someone a ring too early or an extravagant gift that you can’t return, but only the most extreme version of a scenario like that. I didn’t know it was going to be a full play and once I wrote that scene, it snowballed from there.

When did you start writing the play?

A year-and-a-half ago. When I created and started writing the doctor character is when the play really started to take shape. I realized the doctor is crazier than the main character and thought, “Okay, now I have a story.”

The reading helped me realize that some scenes were better than I thought they were but that also some other things needed to be tightened up. I’ve added and edited since then. Dennis Frederick directing.

Is there something, if you had to narrow it to one thing, that you’d like the audience to take home from Ear?

When I make a piece of art, I’m not trying to get a specific reaction from people because I’m more curious to see what they get out of it. You can’t predict that and it’s more fun to not have expectations. It’s interesting, after we did the reading, some people said “Oh, that’s a really weird, interesting love story,” which was funny and interesting to me because it’s not really supposed to be a love story. To me, the love story is almost an excuse for everything else that happens in the play. Those two characters don’t even interact all that much.

It is the sort of story that I think people might leave and mull over it and have a reaction like folks often do when they watch something by David Lynch, like, “What the hell was that about?!” If people have that reaction, that would make me happy. I love art that lingers in your head and makes you pick away at it and continue to wonder about it.

What do you have planned for after Ear closes?

I will be doing some acting in a couple plays, one being Babalon by Paul Green. It’s about rocket engineer and occultist Jack Parsons and how those worlds intersected. That should happen in March or April, not sure where it will be held yet. I am also working on Four Chambers Press’ In Sight project that pairs writers and artists together. I’m working with artist Malena Barnhart for that.

For more information about Ashley Naftule, visit his website, and check him out in the videos below.