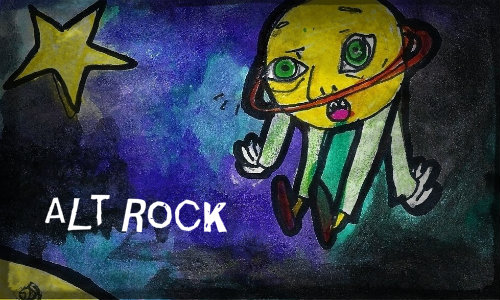 “Bitch Has Got Problems”

The Phoenix four-piece known as Wyves is known for sassy and sexy rocknroll. In fact, their brand of rock harkens back to the 1970s when the phrase “Sex, Drugs, and Rocknroll” was first coined (no surprise).  Wyves’ latest single, “Bitch Has Got Problems”, is as slick as the white vinyl you it was pressed into (available here) and frontman Corey Gloden has a real Rod Steward thing going on that I dig. Take the single for a spin below and then jump on that limited edition 7″ option before they sell out.

This single starts with a drowsy summertime vibe that only edges nearly sludgy without ever losing that indie rock buoyancy that really makes Pittsburgh’s Water Trash a treasure. “Elevator” offers up a meshing of soupy summer psychedelia and sticky garage rock that we’ve been jamming to down at #YabYumHQ all week. If you dig Water Trash as much as we do, delve into their complete s/t debut LP (available here).

Two of the players from the band You Know This Moses joined forces to form Brother Cousin. Their new single, “Bones”, has a raw and stripped down sound that cuts straight to the core of rocknroll. This is definitely a new act to keep an eye (ear) on. If you dig “Bones”, I suggest checking out Brother Cousins’ complete debut EP, The Shit Show. And, if you live in the neighborhood, head out to The Trunk Space on September 16th to catch the band live!

Sooo my inner 90s goth really took to “K, Bye” from Raave Tapes right from the start. Don’t worry, the single definitely has a fresh edge that incorporates some of that early electronica-infused-alt-rock without losing modern relevance. I promise. I can revel in the brooding yet danceable rowdiness of Raave Tapes without feeling outdated. The band comes to us all the way from Newcastle [Australia] but I hope that doesn’t mean a Southwest American tour is out of the question. Until that gets booked, I’ll be passing some time with “K, Bye” and you should too.

“What Are You Afraid Of?”

And, if we do ever get Raave Tapes on American soil for a tour, they should definitely pick up Paper Foxes as their tour-mates. Both acts emerge from a indie-electro fueled alt-rock and offer a new possiblities for fans of 90s goth-rock or, as Paper Foxes describes it, “Dystopic Dance-Punk”. There’s even a distinctive Brian Molko slant to the vocals on “What Are You Afraid Of?” This single is the opening track to Devil on my Shoulder; the new EP from Paper Foxes. Check out “What Are You Afraid Of?” below and then head here to score your very own copy of the EP.