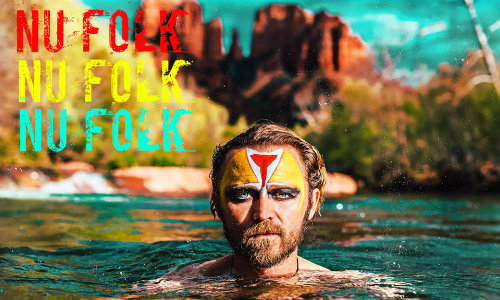 Now, I’ve been part of the decker. fanbase since his 2009 debut, Long Days. And, in the years to follow, decker. has been a consistent presence in the desert rock scene while the band and its principle songwriter (or centripetal force) Brandon Decker has gone through many transformations during that time. Into the Red brings the listener to Decker of days past, present, and future. The album that is part retrospective and part vision for a different future kicks things off with the band’s latest single, “Matchstick Men”. You get that hazy desert psych rock sound that decker. has been recently exploring more in their work (see Snake River  Blues). In fact, the next track on the Into the Red compilation comes to us from that release and “Holy Ghost” reverberates with a mystical power that should you all scurrying back to your copies of SRB. The album veers in an unexpected direction as Decker lays out his homage to some of his musical influences with reworking of The Stooges’ “I Wanna Be Your Dog” with “5 to 1” from The Doors. Into the Red touches upon some of my personal favorites from the decker. oeuvre including “Patsy”, “Shadow Days”, and “Killing Me”. Picking a favorite moment from Into the Red is impossible given that the music of Decker has marked my personal passage of time, but I will say the way the album slinks through those last three tracks to close out is really something special. It’s an intimate moment for all those decker. fans who already heard many of the songs before Into the Red brought them together; the moment you’re invited inside for a glass of iced tea. Into the Red is the family photo album for decker. fans new and old so settle in and turn the pages slowly. And, for fuck’s sake, throw the artist some support by purchasing the album here or anywhere else it’s available. It’s called Into the Red for a reason and it ain’t just because he lives in the red rocks Sedona. And then check with the band’s tour schedule because they just might be heading through your town next month!

It’s a daunting era for those of us trying to stay focused on the future. But, just at the moment I felt I was about to be pulled under the waters of despair, I found the music of Raye Zaragoza and it rekindled the fires inside I feared were about to be extinguished by general cultural malaise. Fight for You is the protest album I’ve been waiting for. There’s a simple and uplifting beauty but it’s the spirit of the music that will really take your breath away. Well, that and Raye’s voice which is staggering: strong and lithe and capable of moving emotional force. And, then there’s her songwriting which is direct enough to almost be out-of-fashion, but that almost adds to her aura as a protest singer. She’s compelling because she’s authentic and straightforward. And Fight for You contains some real gems that delve into the fight for a better tomorrow. I mean, there’s the peaceful sense of community that sits at the heart of struggle on “In the River” and the emotional show of strength on the album’s title track (which we first featured here). The quiver in her voice will send a shudder straight through your soul… if you have one, I guess. But don’t start thinking Raye Zaragoza only has one narrative to explore. “Driving to Standing Rock” is a beautiful commemoration of the experience of the Water Protectors in North Dakota as well as a reminder that this battle in ongoing. On “Bushwick Avenue”, the songwriter turns inward as her story shifts to New York, the city that Zaragoza now calls home. Give yourself the full experience of Fight for You by Raye Zaragoza. It’s an elixir for a media-worn world. You can sample one of the singles from the LP below or you can head here to check out the music video the album’s title title track.

Despite the name of Henry Black’s debut EP, folk music is very much alive and kicking. Folk is Dead dropped earlier this month with songs that bring to mind the protest singers of the 60s at a time in American history where we could really use that sort of resurgent force. The EP opens with “Seven Days” and you’ll hear the same pensive songwriting and easy going energy that initially enamored this artist to me when I first heard a live rendition of “Queen of Brooklyn” a little more than a year ago. “Weeping Willow”, the second track, follows more in line with the tradition of a protest song in the vein of Woody Guthrie and his unexpected protégé, Big Bobby Dylan. Perhaps the most interesting aspect of this new release is that Black works very much within the confines of a genre, and one that’s been around for more than a generation, but the songs feel fresh rather than played out. Folk might have faltered, but it is very much alive and soon-to-be-thriving with artists like Henry Black adding to its lineage in the modern era. Make sure to spend some time with Folk is Dead by Henry Black…