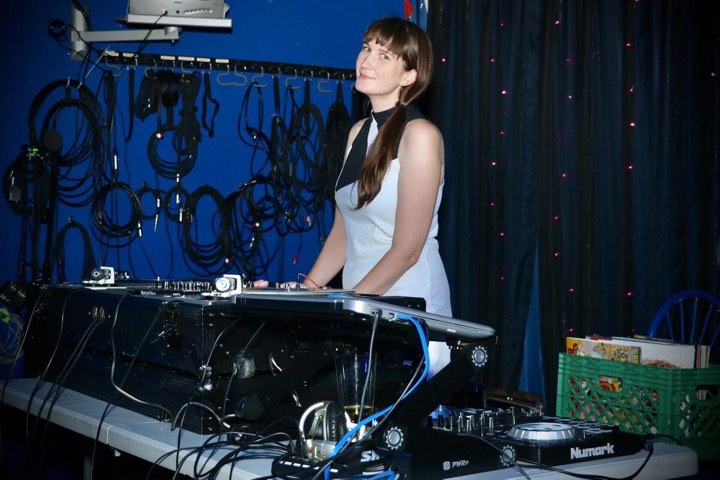 A Claire Slattery has been an innovative force for community building ever since she first showed up in our sunny state for college all those years ago (ahem, we have pictures). Maybe you first saw her performing as a Treasure Mammal dancer. I mean, remember that night she let the audience cut off her hair? We do… and we have pictures.

And we can’t forget her Mixtape project or the many events she helped organize for the MAFW community of Tempe where Slattery resides. Or maybe, just maybe, you’re memories of “a claire slattery” extend even further back to a sticker you might have seen plastered on a light pole or maybe a restroom stall door.

These days, you can catch A Claire Slattery DJing around town. In fact, this very weekend you can her spinning at Valley Bar downtown for D.A.N.C.E., an indie dance party, along with musical guests Warbly Jets and Mute Swan.

As a DJ, Slattery’s adding Valley Tastemaker to her CV so we thought it apropos to ask her to tackle our Tastemaker’s Ten by selecting 10 songs she thinks everyone should hear. Check out A Claire Slattery’s selections below and don’t forget to head to Valley Bar on Saturday Aug 19 for D.A.N.C.E. Bring your best moves.

The Faint
“Some Incriminating Photographs”

Being from Omaha has a couple perks — one of them is sharing the same city as this electronic rock group. It also meant DJs played them at prom and other school dances. I was introduced to them in 2002 shortly after the release of Danse Macabre when my sister’s friend downloaded a couple tracks from the record onto my computer from Limewire. I was instantly hooked. While my favorite record is their sophomore one Blank Wave Arcade, “Some Incriminating Photographs” is a hidden gem from their first record, Media.

Super solid post-punk group from the late 70s / early 80s. A very recent find for me, but better late than never.

I was introduced to The Death Set by my friend Michael Kraft. We saw them at Trunk Space together shortly after the release of their second record and were 2 of the 6 audience members. We freaked out the entire time and it got to the point where they just started playing whatever we requested. I saw them two more times at SXSW with Michael before they broke up. I didn’t think anyone else actually liked them except for us, but I must have been wrong because this song ended up in a Chromebook commercial.

The Juan Maclean
“Give Me Every Little Thing”

Hands down one of my favorite tracks to dance to. Extra bonus: James Murphy chants a lot with Nancy Whang.

Archers of Loaf
“Harnessed in Slums”

I discovered this band in quite possibly the dumbest way possible: I was listening to an interview with My Chemical Romance in 2005 and one of the members said they dated a girl who liked Archers of Loaf. Naturally I had to find out who they were because I was a SUPERFAN. I couldn’t find their music anywhere except this one track, “Harnessed in Slums”. A few years later, I found a White Trash Heroes CD at a local record store, but largely forgot about them until they reunited and repressed all their records. Anyways, that guy’s girlfriend was right, they rule.

Clap Your Hands Say Yeah
“In This Home On Ice”

My sister burned me a copy of the record this song is off of for my 16th birthday, but I really didn’t get them at all until 2007. Though now that I’m older, I kind of think Alec Ounsworth tries too hard to sing like David Byrne, but I mostly don’t care. I love every song off of this record, but I picked this one because there is a soft beep that happens around 2:45 and it faintly sounds like the beep my Civic makes when there is an open door, so I jump every time I listen to it in the car.

I try and throw this song in any set I can squeeze it in. Computer Magic is a one-woman cosmic-pop producer who is very underrated.

There is a gouge in my copy of this sassy single and every time I play it at home, it works, but whenever I play it live, it skips. It is very sad. Delta 5 is one of the first female-fronted post-punk groups I was ever introduced to. I associate this song with that one time I dropped Erin Caldwell off at a car dealership while we were both dealing with end-of-relationship garbage.

Tom Vek is a recent find for me. While the record this track is off of is kind of hit and miss, this song is super strong.

I’m going to ask them to play the Vanishing Show in 2018, but they’ll probably want both a guarantee (money) and a guarantee to play, but I can’t give them either. Thank you Steve Jansen for introducing me to Complete, the best worst band in Texas.