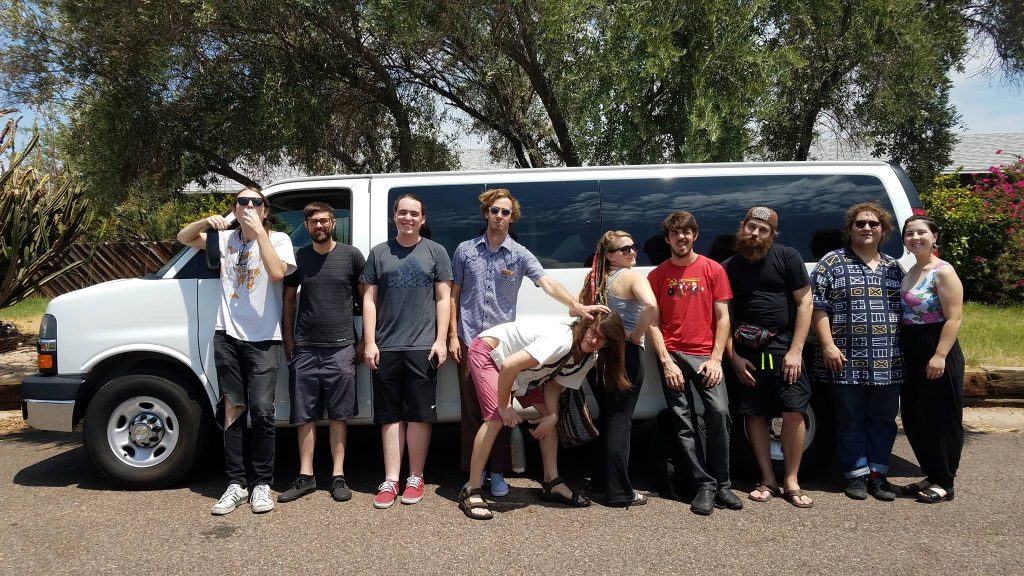 All photos courtesy of Jerusafunk

Phoenix Klezmer-funk fusion band Jerusafunk packed up their members (and their instruments… and their wardrobe) to hit the road for a North American tour to help spread the J-Funk gospel across the distant horizon. Of course, as soon as I caught word of the whole Jerusafunk crew crammed into a van for more than two weeks, I lit a candle for the band’s safe return and tried to envision the four-wheeled chaos that was about to roll through unsuspecting towns.

But instead of just imagining the antics, I asked the band to take us along for the tour and J-Funk’s Jessie Demaree was kind enough to oblige with both photographs and observations. Check out the images from Jerusafunk’s cross-country adventure and read my Q&A with Jessie about the tour below… 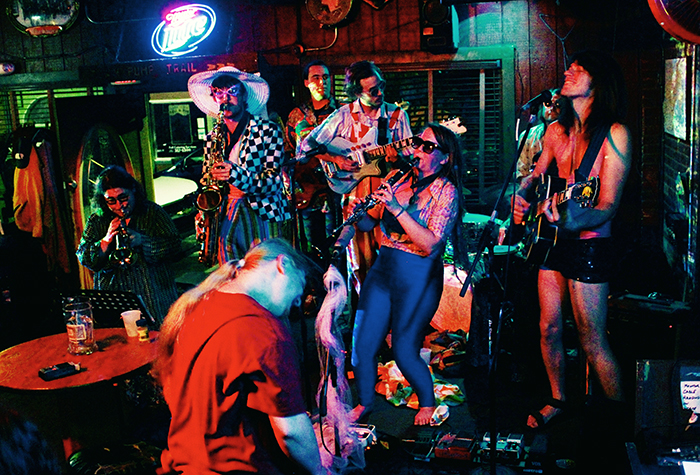 Of course, the big question on everyone’s mind is how on earth could Jerusafunk possibly fit in a tour van? Were you all crammed into one vehicle? Or was it more like a carnival caravan?

Well, we wanted to go in one big van, but it was probably a bit too optimistic and our plans were dashed the morning of when the van filled up with only gear and no people!

Luckily, Jessie had her car ready to go as plan B, so we filled her car with all of the personal gear (which was also packed to the brim) and headed out. It was 7 heads in the van and 3 heads in the car, and we did the best we could to rotate people around. 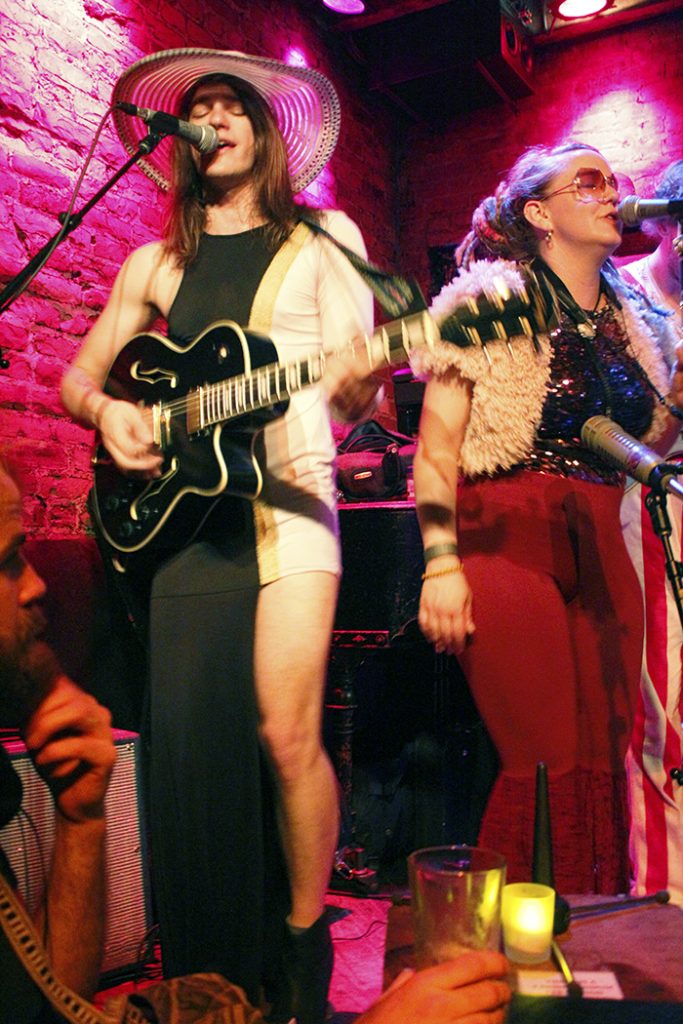 So, I know it’s hard to play favorites, but were there any really special shows that stood out in your mind?

Every show had something unique about it, whether it was playing to a near-empty club or a packed mountain town bar, we got something special from each place. Although Cambridge, MA definitely stood out. John E Funk & the Skunks took in all ten of us at their home, bought us pie and watermelon, and chummed it up over lots of Brandy and libations. Real swell guys. We played at an Irish pub that night called the Plough & Stars and we really felt welcome. The bar was thin and cozy, the people were rambunctious and enthusiastic, the employees were kind and helpful, the beer was abundant, and Cambridge loved the funk, and we made some money, which is always a plus, haha.

What about non-tour-stops? Did you make some pit stops at any interesting places?

Bailey (bassist) turned 21 the day before our first show in Little Rock, so the whole band went out to the Foul Play Cabaret show in Hot Springs, which was absolutely fabulous. We had a nice break in Gettysburg with a good friend from Flagstaff, Matt Miller. Got high on a bunch of dead folk, shared some music, and his lovely mother made us breakfast in the morning. Chris’s father’s friend Joey let us stay at his family’s lakeside compound by Pleasant Lake outside of Syracuse. We spent two nights out there partying, shot some music video footage with the drone, got chewed on by some mosquitoes, and just enjoyed some serenity and recharged. Peeked at Niagra Falls for a quick minute, and walked around Chicago and stumbled into The Greenmill, Al Capone’s old hideout. 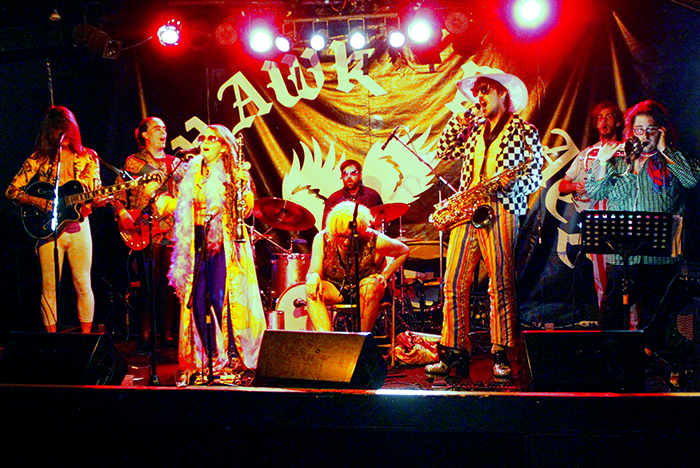 Now, I want the hard details of the J-Funk road crew. How many people were along for this ride? And where did you all sleep?

We had the full 8-piece band, plus our friends Amanda and James came along to help us sell merchandise and shoot some footage. We were about half and half on motels and hosts, rotating from beds, floors, the van, hammocks, air mattresses, and couches. We stayed in a really amazing airbnb house in Nashville – my personal dream decor. In Chicago we all crashed in the basement of a music hostel called Earphoria in Logan Square. It’s a communal DIY space that’s run by musicians and they only asked for 50 bucks and a couple of chores to stay there. To other musicians: They offer play & stay option if the timing is right, so hit them up if you want to play a diy space and stay for free!

Favorite tour snack? Was it endless amounts of Atomic Fireballs or maybe Hot Cheetos? The people need to know. 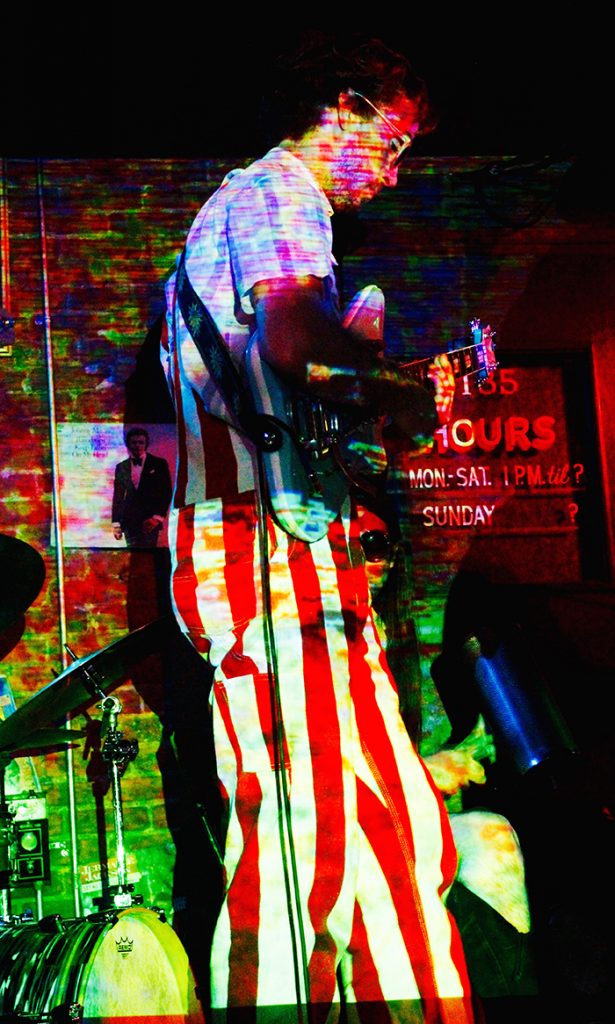 Did you run into any unexpected challenges on tour?

East-coast maneuvering and parking. We knew it was going to be bad. It was really bad. Getting into NY and parking that van in Manhattan was the biggest headache of the trip. We thought Chris was going to take his life trying to park that boat. Luckily that was the toughest hurdle and a typical rookie mistake… lesson learned: buy an ez-pass and consider parachuting in to NYC.

Any new bands that you discovered on the road that you want to share with your AZ homies? 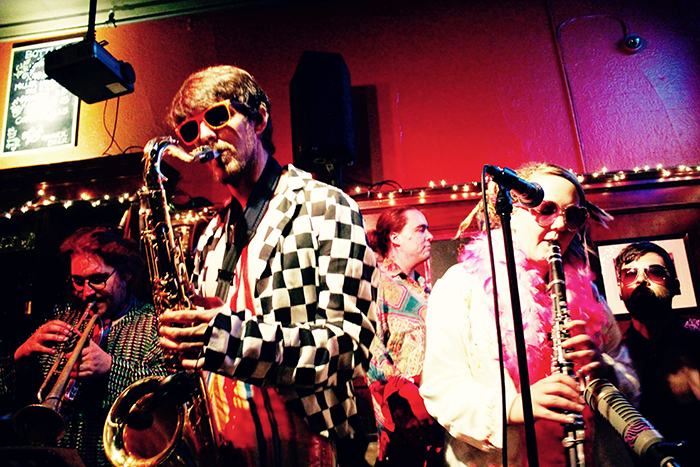 Our favorite part of being on tour is always traveling and sharing new experiences with new people. For many of us this was our first time witnessing the beauty of the U.S. east of the Mississippi, and that was life-changing. Being in a car for the 20-hour dash home was rough, and definitely waking up in the morning was always a chore. We have maybe two morning-people in the band, so it got a little touchy with the grumpsters before Dunkin’ Donuts! But most of all, what made this tour so special was getting tighter with the bois and making weird music in strange places. It’s a joy that not many get to share.

Now that you’re back on home turf, what’s next for J-Funk?

We’re planning a fantastic show for the December 1 Alwun House Lights Out exhibit! We’re trying to get a new music video together, complete some new songs, brainstorm another tour, and maybe collaborate with some designers to get us some sexy new outfits! We’ll also be trying to release The Hierophant on vinyl. Presale coming soon! 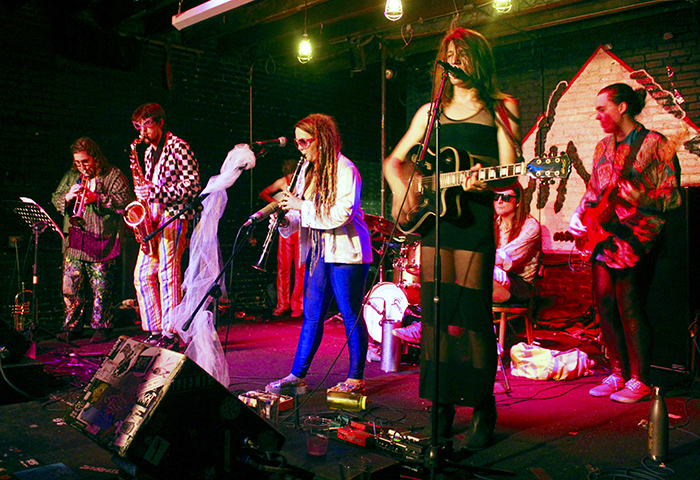 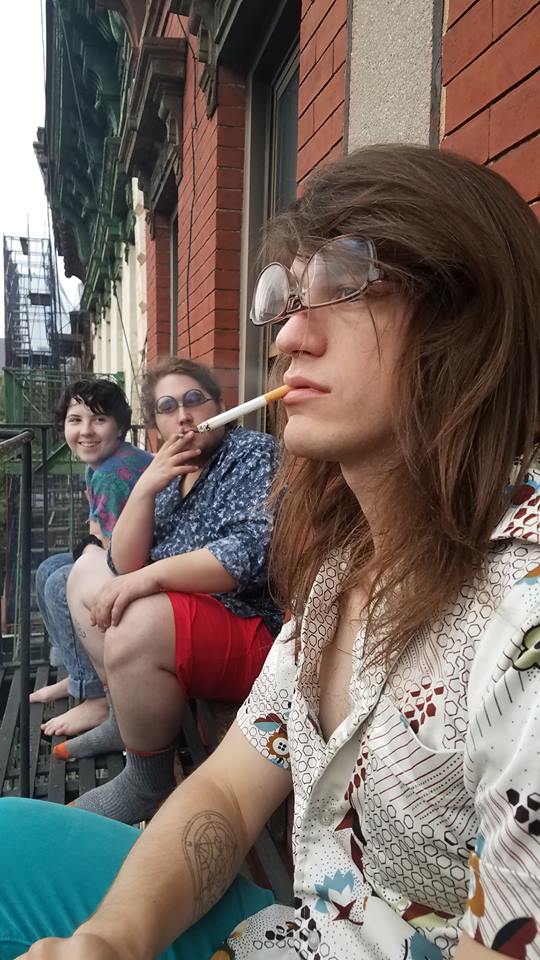 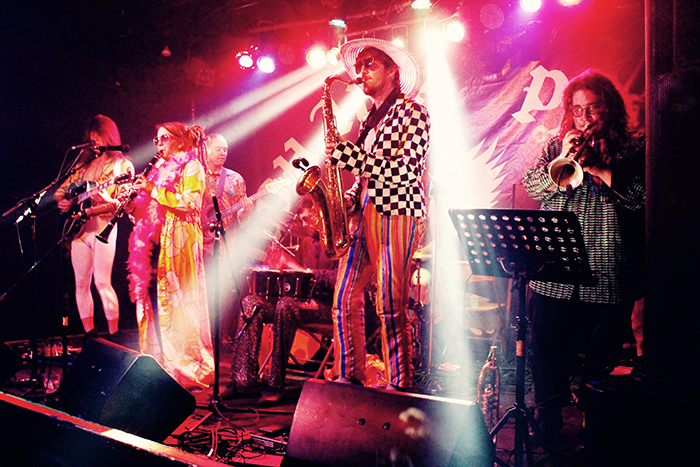 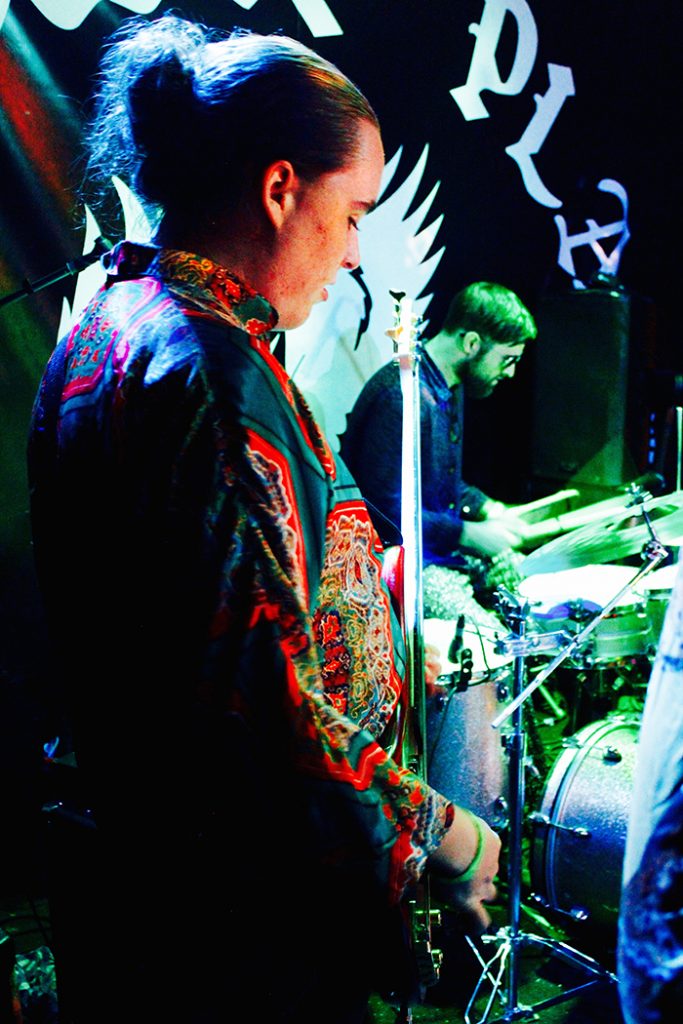 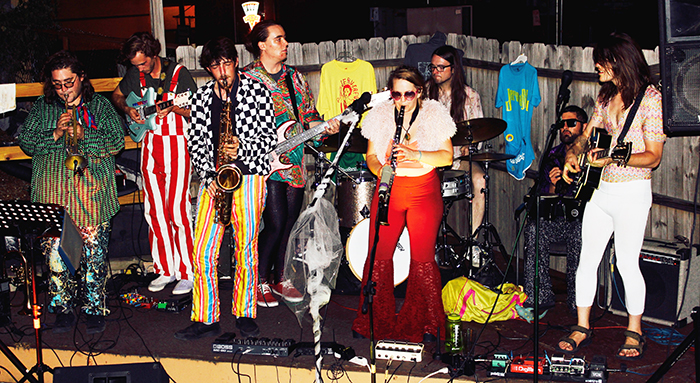 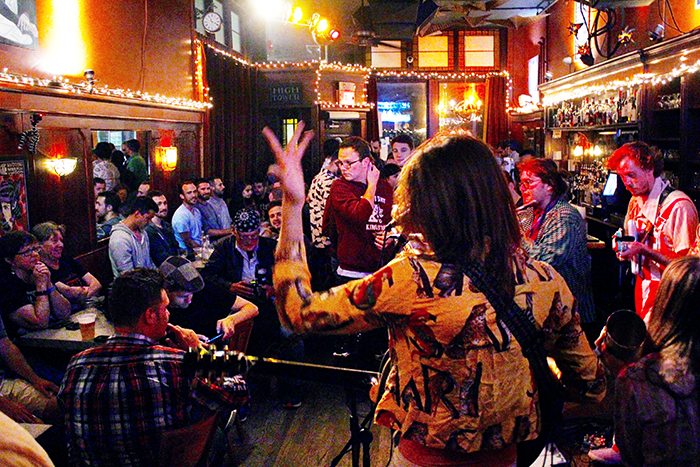