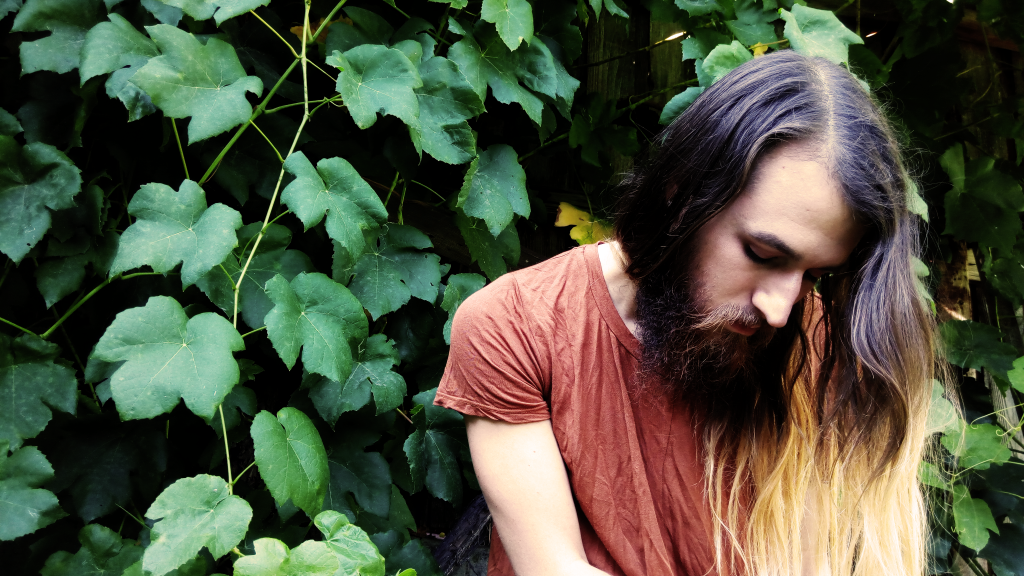 Stephen Cope is the songwriter behind Officer Jenny; a musical project with a playful name and serious sound.  Officer Jenny emerges from the murky, merging waters of weird folk and baroque pop like a dark Venus in some Southern Gothic swamp.

At times, the music heard on his new album God of Death, is strange as it slowly trickles beneath Cope’s haunting voice. At other moments, the emotional currents join together fluidly with orchestral instrumentation to create a powerfully mood-altering force.

Sink into God of Death from Officer Jenny and make sure you check out the interview with Stephen Cope about the music, the melancholy, the moniker, and a whole lot more below. But, first, the album…

Is Officer Jenny the name of a band or is it the moniker you perform under on your own?

Yeah, Officer Jenny is like a catch-all name for my various musical projects! I’m not great at sticking to a musical concept or aesthetic, so it’s helpful for me to like contain everything under a moniker, I think? I play with bands sometimes, but there’s never like a consistent lineup or instrumentation.

Is Officer Jenny your first musical enterprise or have you released music under different names or with different bands?

Officer Jenny is my first serious personal music project, definitely. I play organ in a really awesome band called Quiet House and run a recording studio so I work with a lot of different musicians and do a lot of fun projects like this marathon album I wrote and recorded with a ton of friends in 24 hours (Kuiper Light Drive) and these children’s songs my friends Stuart, Jesse, and I wrote (I really want to revisit and expand this stuff, it’s like really fun and beautiful!).

So, are you originally from Provo [UT] or did something bring you to the region?

I grew up in southern California and moved up to Provo to study music about ten years ago. I’ve grown pretty attached to the area!

There is definitely a pensive feel to the new album, almost a melancholy, I would say. Is that more a reflection of your own nature or more a tone that was in place on this particular album?

Hmm, yeah, I definitely wanted to draw on a pretty specific aesthetic and overall vibe for this record. A lot of my stuff tends to be pretty dry, irreverent, self-loathing pop shit, but I wanted this to come from a different place. It’s more somber and hymn-like so there’s a lot of kind of meditative modal droning and the instrumentation–winds, pump organ, nylon string guitar, mellow piano shit–and a lot of the lyrics act like prayers of sorts, I think, especially “Gardens of Gold”, “Child of the Crows”, “Dawn on Me”, “Cradle My Head”…

I did notice that you listed Vashti Bunyan as a personal influence and, I must say, she’s a personal favorite. What other songwriters do you feel have influenced your own songcraft?

Yeah, I definitely love Vashti Bunyan. Probably my biggest musical influence in general is Elliott Smith! He was a fucking incredible songwriter. Nothing has ever really moved me the way Figure 8, XO, and Either/Or do.

I also REALLY love Disasterpeace’s soundtracks for Hyper Light Drifter, Fez, It Follows, The Floor Is Jelly, and this really beautiful generative music tool he made called January which you can download here and I like HIGHLY recommend it.

Also the Chrono Trigger soundtrack, the Ocarina of Time and Wind Waker soundtracks, the Kentucky Route Zero soundtrack. I think a lot of my melodic and harmonic sensibilities probably come from playing those games and listening to those soundtracks!

Tell me a little bit about the new album. Where did you record it? Did other musicians make an appearance on it?

Yeah! So I wrote the album about a year and a half ago and have slowly been piecing tracks together with help from a few friends. Jesse Quebbeman-Turley, who just released a gorgeous album called NAPS, played drums, Stuart Wheeler who fronts the band Quiet House that I mentioned played piano on a few tracks and a little trombone, and Alex Vincent played bass on “Child of the Crows”. I have a recording studio in my friend Chance’s basement where I recorded it all.

As a songwriter, where do you find inspiration?

This album in particular is lyrically centered around some respiratory shit I’ve been dealing with the past couple of years, but I find inspiration from a lot of places. I have a lot of really awesome friends making cool-ass music all around me and every time they release something or I see them play I get excited about creating music. I’m working on a new record right now using the text from a beautiful kind of zany section of Mormon scriptures. Video games honestly inspire the hell out of me. So much incredible art and music and storytelling.

Okay, the webmaster will be upset if I don’t ask… Favorite video games?

God, don’t get me STARTED. I love the classic LucasArts and Sierra point-and-clicks–Secret of Monkey Island, Loom, Fate of Atlantis, etc. Also old text adventures like Colossal Cave and Zork and more recent ones by Emily Short and Andrew Plotkin.

I got to teach a two week class at the high school I teach at where I introduced all my students to all those old adventure games and helped them make their own using Twine. It was fun as hell!

There’s a more recent graphical text adventure game called Kentucky Route Zero that has kind of American magical realism vibes and it’s one of the most beautiful games I’ve ever played.

OH, everyone should check out this Twitter bot I’m working on called Whispy Glen! It generates events in a small Twin Peaks-esque town, kind of feels text adventurey! Still a work in progress, but I’m really excited about it! 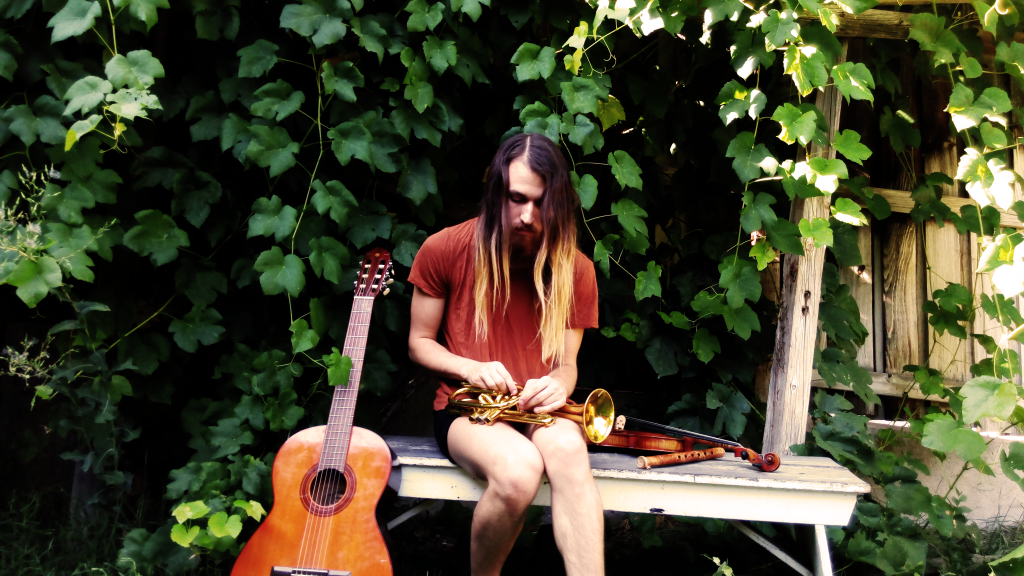 Just curious if there is a story behind the name Officer Jenny?

Yeah, so Officer Jenny is actually a character in Pokemon which is goofy! That’s kind of the origin of it, but it’s been nice for me as a nonbinary femme person to have this traditional woman’s name to record and perform under.

Can you tell us a little about the scene in Provo? Any particular genres of music really popular? Favorite places to perform?

Provo’s music scene is like pretty small but cool! The more popular local stuff tends to be like Imagine Dragons or like Mumford and Sons arena pop & folk stuff, but there’s some really good pop and folk music that I’m much more interested in that, unfortunately, kind of flies under the radar or is maybe outside of the realm of interest of college students and local gatekeepers. There’s basically one venue in town called Velour that has a really beautiful aesthetic and curates some really good shows, but when I do play shows, which is pretty infrequent, I generally just play at my studio or other houses around town or up in SLC at Diabolical Records, Kilby Court, or Urban Lounge.

And where should touring bands stop in town? Maybe to eat or to buy records or see the world’s biggest ball of yarn? Where would Officer Jenny send visitors in Provo?

OK, there are SO MANY good places to eat here. Good-ass tacos and other Mexican food at El Mexsal, Taqueria El Vaquero, and Don Joaquin. Noodle King has great Vietnamese food. Bombay House is an incredible Indian place and honestly maybe the best restaurant in town. Hruska’s Kolaches are these incredible like $2 buns stuffed with breakfast foods. My favorite spots in town are probably Block 100 Antiques when Sharron and Russ are around, Boxcar Studios when Jake or Nick are throwing a party, Velour when there’s a show I’m interested in. Also my studio! If touring bands ever want to swing by Dada and have a beer and listen to cool local music they can totally text me!

Yeah! So I’m working on a couple of new records, one that I mentioned earlier, a darker mixed-modal maybe kind of doomy, gazey folk record (I guess I haven’t really settled on the aesthetic) using the text of Abraham 3 from the Mormon Pearl of Great Price. I’m also working on a more kind of video gamey, ostinato-based record involving some musician friends of mine that hopefully pans out! And yeah, maybe a music video for one of the God of Death tracks? I’m talking to an awesome filmmaker friend about concepts right now, so definitely look forward to that!