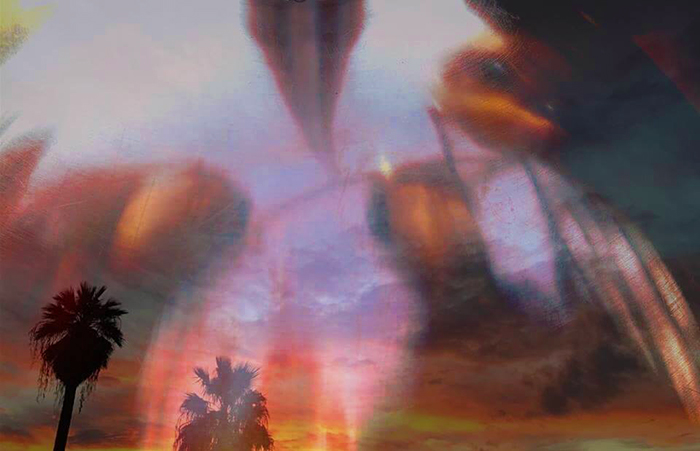 Citrus Clouds features couple Erick Pineda on vocals/guitars/lyrics and Stacie Huttleston on bass/vocals [more on that here], along with Angelica Pedrego on drums.

Featuring their trademark desertgaze sound, “Life Happens” is an airy, honest, epitaph and an ode for those of us still living to push on — living out our days under the Sun’s watchful, unconscious eye.

Erick took some time out of his busy schedule (you’ll read why below) to answer some questions about the new track, the haps currently, and what’s upcoming for the Citrus Clouds crew!

But first, check out “Life Happens” below.

YabYum: First off, the basics, where did you record this track, who engineered it, and is it for an EP, LP, or just a stand alone single?

Erick Pineda: We recorded it April 29th and 30th with Jalipaz at Audioconfusion. It’s the first single from our new EP titled Ultra Sound.

This is the current line-up of you, Stacie, and Angelica right? Are these the first recordings featuring Angelica? (Or maybe that was “Come In Alone”?)

To me it seems obvious that this track deals with some very personal issues you’ve experienced within the last year. Was this song a cathartic release for you in the ‘c’est la vie’ sense, or was it much more heart-wrenching and self-aware than that?

“Life Happens” was the last song written for Ultra Sound. We had initially been scheduled to record the last week of March but that had to be postponed a month. In that time, my dad Heriberto Pineda passed away and the song changed to reflect that. At its core, it is a song about everything ending and being OK with it. Acceptance if you will.

When is Ultra Sound due to come out? Is there a release show in the works?

Ultra Sound is due to come out in mid-September on shoegaze/dream pop label Custom Made Music. We plan on having a local release at the Rogue on October 7th. It will also be our first show back after the birth of our son Solomon.

We’re in the process of shooting a video for “Life Happens” in West Phoenix right now. We’re also going on a west coast tour in November with fellow shoegazers and Custom Made Music label mates Death Valley Rally.

Is there anything about this song or the band I failed to ask that you would want our readers to know?

We’re really excited for everyone to hear Ultra Sound. We worked really hard to write the songs and I feel this is the maturation of the Citrus Clouds sound. The EP is dedicated to Heriberto Pineda and Solomon Pineda.