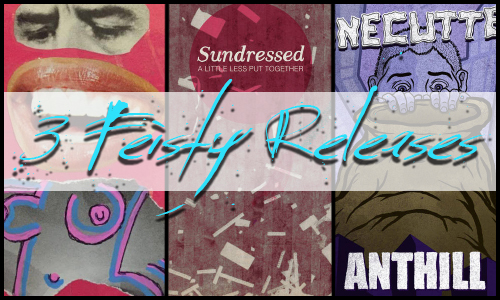 Okay, so maybe we have been pretty swamped with singles and haven’t been spending as much time with albums lately. And that sucks. So consider this a shared announcement from your editors: we’re sorry and we’re back on our game. Starting right now with these super feisty local releases that came out last Spring but got straight stiffed by YabYum… until now.

In case you haven’t heard, Exxxtra Crispy is the new hot party band taking over the local scene. While the band might (accurately) describe their sound as “$leazy minimalist garage punks who smoke 2 much weed,” I find Exxxtra Crispy creates a merging point of weird punk and meme culture intent on purging all your misgivings on modernity into feisty good times. On the band’s debut EP, They Don’t Think It Be Like It Is But It Do, the band addresses apathy, dead-end jobs, and the eternal questions (like “What The Fuck Is Wrong With Me?”) with humor and fury in equal measures. “Andromeda Will Have Her Revenge On Tempe” is my favorite track from the EP, but that’s probably just because I can really relate to the line, “I’m hangin with my dog & doin bad stuff.” If you’re seeking a cathartic purge of bad vibes, I suggest scoring your own copy of They Don’t Think It Be Like It Is But It Do and turning up the volume loud (real loud). If you’re not laughing (or dancing) by “Drugs R God”, you have no place in the Millennial Era. I suggest investing in a juicer and watching reruns of Friends for the rest of your life. It’s not gong to get better for you.

A Little Less Put Together

These Tempe-based emo indie rockers have a pretty die-hard fanbase so I’m probably not filling in any fans who might have missed the album. This is for everyone else that might not have crossed paths with Sundressed yet. You should. And their latest LP, A Little Less Put Together, is a perfect introduction. The album opens with “Of Course” which sets both style and temperament before you get thrown into the full-blown nostaligia of “Mill Ave and Broadway”. This track isn’t just nostalgic for those of us who have stood at those particular crossroads. Everyone has been at the corner of “Mill Ave and Broadway” in metaphor. That’s part of what makes Sundressed and, more specifically, Trevor Hedges’s songwriting really stand out. He lays out his feelings in an open and honest way and that’s what makes his lyrics so gosh-darn relatable. Each song captures a real moment that feels totally tangible so playing favorites with this LP gets rough. That being said, “Autopilot” is a personal favorite, but that might have something to do with the fact that it is one of the album’s more somber tracks. Dive into the album if you haven’t already and pick your own favorite. Sundressed is heading out on tour in September with Dry Jacket and you can check their tour schedule to see when they might be passing through your town. Until then, spend some time with A Little Less Put Together…

If you’re ready for some knock-down-drag-out punk rawk, Anthill from The Linecutters is the answer. This springtime release from the Gilbert-based three-piece has enough energizing angst to keep you feisty all the way through the summer months. Vocalist Marceliano Festa knows how to throw down some metal thrash into the mix while the music surges with unconstrained force. Many tracks on the album, like “The Grind”, show off some hardcore chops, but you can still hear a bit of the ska influence that pervades other tracks like “Never Doubt” and “Leafy Greens”.”Betrayed” veers in an unexpectedly mellow alt-rock direction but the energy and angst get cranked back up to Linecutter level before the the song ends. If you haven’t explored Anthill, you should check it out on Bandcamp right now… and consider throwing some support to these youngsters for their art. Or they just might find a different channel for all that antifa rage.