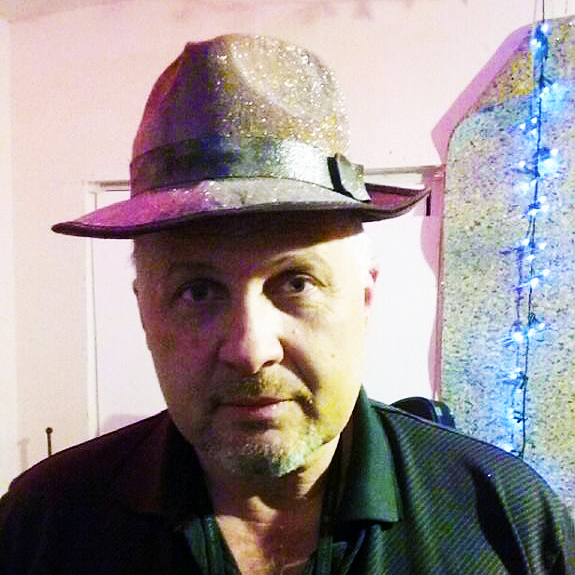 Serene Dominic is a staple of PHX Music. From his own recording efforts with the Gemseekers (his band) to his work with Onus Records, this guy stays busy because we haven’t even come close to covering all his artistic endeavors. Back in 2016, Dominic took our award for “Hardest Working Musician” and he shows no signs of slowing. In fact, he released Silver Alert just in time to help bring attention to Dementia Awareness Week and he’s already gearing up for his new musical, Dark Lullaby. Auditions start next month!!

Despite all this, the Serene D still took some time out of his schedule to pick out 10 songs that he felt everyone should hear, in keeping with our Tastemaker’s Ten tradition… enjoy!

Like everyone else who has done this list, I will stress that these are not my all-time favorites. Some are, but mostly these are songs I’ve discovered on my own trolling YouTube and have become recently obsessed with, songs that I wish more people knew and celebrated. Silver Alert– many of them are very, very old and have drive!

The Marvelettes
“That’s How Heartaches Are Made”

I could’ve filled this whole list with Motown songs no one’s ever heard of and should know alongside their best loved chart triumphs. I’ve made no secret of trying to emulate Motown’s factory assembly of singers and songs for Onus Records but while you could accuse Hitsville of willfully making the same records over and over again (“Let’s take that Temptations track and put Gladys Knight’s vocals on it”), here’s an example where they did something I’VE NEVER HEARD DONE ON ANY OTHER RECORD EVER, an effect so incredible, and yet even they never attempted it again. No slight to Wanda Rogers who turns in a customarily great vocal performance here but pay strict attention to the instrumental break at 1:35 when the producer puts an entire orchestra through a wah wah pedal! Maybe because this was a middling 1969 chart hit for the Marvelettes, you can imagine an overly cautious Berry Gordy, the guy who after all shelved “What’s Goin’ On” for a year because he thought it would damage Marvin Gaye’s career, saying, “No more of that wah-wah orchestral shit, fellas. The girls need a hit.”

They say the greatest songwriting trick (and the key ingredient in all soul music) is “tension and release.” You only have to hear the squeals on any live James Brown or Gene Chandler album to hear how they ratchet up the tension and then when the audience can no longer stand it, they release the crowd like a captive bird. Here Frank Black (whose Pixies work is all about the tension, the release is usually comes with the arrival of the next less tense song) works himself up in a froth about who knows what. I don’t think I’ve ever looked at the lyrics and I don’t need to. He’s in a state, he vents and then his anger takes off like a brilliant terror bird to make for the best fadeout of the last 30 years.

In 2006 I wrote a book on Burt Bacharach where I had the pleasure of collecting and critiquing his entire career (shameless plug number 1) and hopefully helped prove he’s more revolutionary that the easy listening tag he was once lumbered in with. This is one of those songs I pull out that people don’t know (it was the theme of a terrible 1971 Malcolm McDowell movie) but it demonstrates how Bacharach violates all the conventional pop rules, like the building up to the chorus which leaves you suspended in a completely different key and fading out the song on the verse instead of the chorus. And BJ was no slouch in the vocal department either!

Linda Jones
“For Your Precious Love”

Once in a joint interview Aretha Franklin and Gladys Knight were asked who their favorite singer was, and instead of naming each other, they both blurted out “Linda Jones.” Jones was an unheralded singer whose highest charting hit was “Hypnotized” in 1967 (the fact that she sings “hyp-MO-tized” makes me love it all the more). Her records were woefully out of print when I got into her in the early aughts – I justified having a LimeWire account by the sheer volume of direct-from-vinyl rips I got from there. But relax – when BMG released Linda Jones Greatest Hits I bought it – only to find out many of the tracks were from the same scratchy direct-to-vinyl rips. When you hear vocal gymnastics from all the Mariahs and the Christinas that came later, it sounds like an exercise, but with Linda Jones it sounds like she’s trying to breathe with the amount of holes someone left in heart. This is a pretty great demonstration disc of this force of nature who sang like a wounded animal and died from complications from diabetes at age 27 in between sets at the Apollo! A YouTube comment left for this video says it all: “Why is this LADY bring tears to my eyes??” Most of her records can reduce me to a puddle, this one with its ridiculous spoken word passages also makes me grin uncontrollably.

Marshall Crenshaw
“Whenever You’re On My Mind”

I come from that era where whenever you hear the perfect pop record, you have the Pavlovian response of wanting to buy it again. That explains why I own five copies of Beatles ’65 and six copies of this. Back when records could still be expected to make people happy.

The Impressions
“I Can’t Stay Away From You”

Show of hands, who here has ever been made a fool of by someone and through some deep-seated self-loathing, you still couldn’t bring yourself to stop longing for? Nobody, I’ll venture to guess! Here The Impressions capture all the beauty of that sadness of being told lie after lie in a one-sided love affair and still not giving into hate. This unbelievable ballad only squeaked in the lower reaches of the top 100 late in the Summer of Love. I blame the drugs.

The Moments
“Lovely Way She Loves”

On my last CD (Silver Alert, shameless plug number 2) there’s a song called “Stang” which is a tribute to this record and The Moments, who recorded for Stang Records. I love the lovely way the spoken word is from the woman, whose reverie gets progressively more demonstrative until it is backed up by a piercing car-alarm note from her castrato boyfriend.

My go-to karaoke song, mostly because I get to practice my falsetto. Believe it, nothing impresses a room full of disinterested people more than an unassuming schlub like myself emulating a guy they don’t know but for a head-splitting sound they’ve heard on radio for decades. Here’s a guy longing for a broken-hearted girl still smarting from a recent bust-up and he’s chomping at the bit to be the boyfriend in waiting, the guy who would’ve been true to her all along. This song has so much heart, it’s like a gift from another more caring world, a point driven home at karaoke, when I’m usually followed by somebody singing, “Back that ass up here.”

David Ruffin
“Walk Away From Love”

My other go-to karaoke song, along with any Temptation song that David Ruffin sang lead on that’s in those big fat song binders. This was a hit in 1974 but totally forgotten -even the DJs scratch their heads when they program it in. Ruffin does this unbelievable octave jump at 3:49 that I keep struggling to carry off as effortlessly as he does. If you told me I could hit that note if I banged myself repeatedly over the head with a lead pipe, I would do it. Unfortunately, Ruffin made contact with another kind of pipe that wasted his life and robbed him of his talent. When I saw him live at the 1982 Temptations reunion tour, that falsetto was merely a wisp and when it came time to hit the high note on “I Wish It Would Rain,” he turned the mike and let the audience hit the note for him. I prefer to remember him this way.

The Easybeats
“Falling Off The Edge Of The World”

People point to “You never close your eyes anymore when I kiss your lips” as the most devastating opening line of a torch song. The opening line here matches that (“The love that was in your smile when I married you isn’t there now”) and the Easybeats compound the hurt even more by dragging the kids into it (“And even the children see that you don’t stay respectable now”). Ouch! The shame just drained! This was supposedly Lou Reed’s favorite song on the Max’s Kansas City jukebox and he called it “one of the most beautiful records ever made.” It’s a crime The Easybeats were only one hit wonders here in America. A few years ago at Tucson’s Great CoverUp Festival, I was thrilled when Sidewinder David Slutes assembled an Easybeats cover band. Enjoying the Easybeats in the company of other people must be what it feels like for a dude to wear a skirt in public for the first time. It’s weird but you can’t argue with the breeze up your leg.