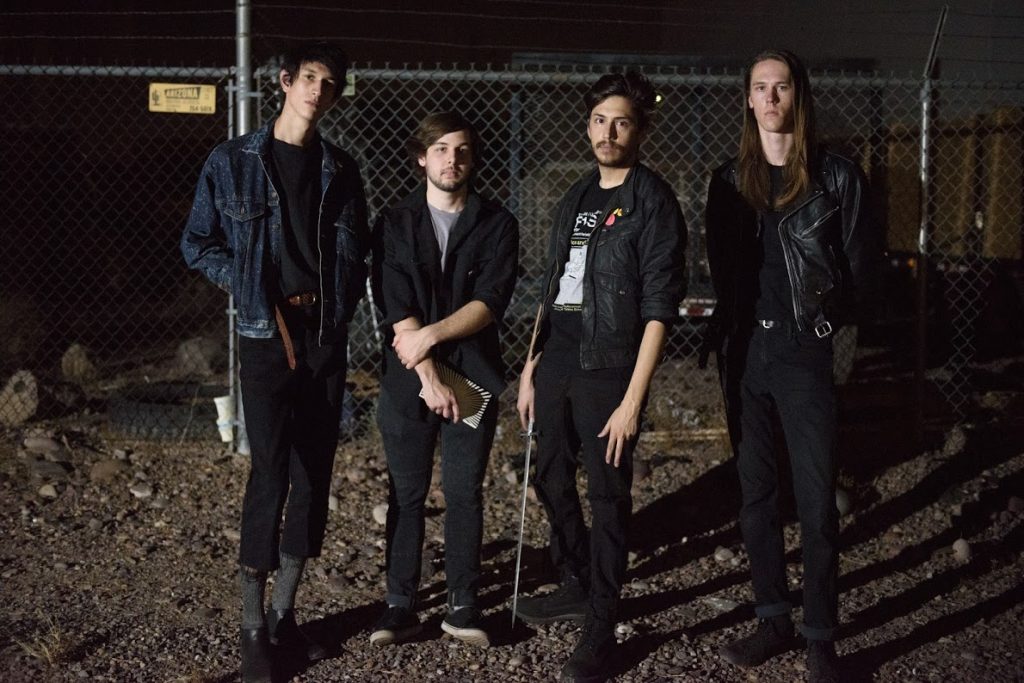 The PHX outfit known as Red Tank! takes just the right amount of rowdy and arty and smashes them together for a Postmodern sound that will delight punks both new and old. In fact, we liked the band’s 2016 release, BIO/FEEDBACK, so much we gave it our “Best Punk Album” award.

And it looks like Red Tank! has no plans of slowing down this year. In fact, they’re gearing up for an East Coast tour and the band produced (and released) a zine this year to help with tour support.

Moreover, while band was busy getting ready to escape the summer heat of the Sonoran Desert on tour, frontman Clipper Arnold took time out of his schedule to *chat* with me about the band, the impending tour, and what the future holds for Red Tank! Check out our Q&A below and don’t forget to head to The Lunchbox a week from today for the Red Tank! tour kickoff (more info on that event here).

YabYum: First off, I was hoping you’d go a bit into the story behind the name Red Tank! because I like how it correlates to the experience of seeing the band perform live..?

Clipper Arnold: Well, it’s kind of a silly thing, actually. Red Tank! was originally just a handful of more energetic/frenetic songs I had written while I was a part of another band. The name is just alluding to the power and presence they were supposed to evoke (i.e. “red” being a “power color”, “tank” being a large military vehicle, and “!” for added emphasis). Tristan from Dogbreth has told me he thought it referred to the freaked out feeling you get when your gas tank is in the red, which I think I like better. Sometimes I wonder if it was a play on Wire’s “Pink Flag” or an allusion to some of the Marxist theory I was reading at the time, but I’m not quite sure to be honest. Most succinctly, I think it’s just supposed to allude to the band’s energetic tone and performances.

There have been some changes to the Red Tank! lineup since its inception. Who is currently part of Team Red Tank!?

Yes, lately I’ve been referring to former Red Tank! members as “alumni” which maybe sounds a little nicer. I’ve been heading this project for a long time, but there have been a lot of people in and out who have contributed a lot and made it something more in their own ways. I’ve recently had to take more responsibility in it explicitly as my own thing, so I’m mostly going to be working with people who are available instead of focusing on developing a cohesive/consistent lineup. For the Summer tour, Nate Ray (Rotting Yellow, James Band) will be playing drums, Nick Rennemann (Go Outside) will be playing bass, and Daniel Pogue (Future Ghost, Coffee Pot) will be playing guitar. My friend Joseph will also be coming to do merch stuff and help us take photos/video.

So, you fellas are planning on heading out for an East Coast tour. That seems like quite the undertaking. First, give me the run down. How many shows? In how many cities? In how many days?

Honestly, it’s got a couple of dates to still be fully nailed down, but we’re looking at about 12-14 shows over the course of 2.5 weeks. We should have a tour flier and events up sooner rather than later. There’s about three NY dates I think, and the others are going to be mostly around the New England area. I think there’s also a Chicago date in there and some stuff on the way there and back.

Have you played “Back East” before?

No, this is going to be the first time. I’ve personally been to a few of these cities before, but most of them will be new. We’d planned on doing some East Coast dates once or twice, but something always fell through. It’ll be nice to play in new places, but that’s kind of going to be the difficult part as well – not knowing what to expect audience-wise, venue-wise, etc.

Is this the longest tour you’ve done to date? Where else has Red Tank! ventured to seeking musical adventures?

We’ve done four full West Coast tours (up to Seattle and back), and played a handful of shows around Austin for SXSW. We’ve also played Tucson and Flagstaff and done a few mini-tours to California. Usually the West Coast ones run from about 10-14 dates, so this is about par for the course.

I know the band likes to keep it DIY. Any house shows or unusual venues lined up on this journey?

There’s someone who’s helping us with the booking, so I’m not sure exactly what to expect – I think one of the houses we’re staying at in Bushwick is populated by a bunch of experimental musicians and Mac DeMarco used to live there and throw shows there – which is something. We were trying to set up a show there too, but apparently the roommates vetoed it since they know how nuts it can get.

And, keeping with DIY theme, you’ve pulled together some innovative band merch options for this tour. Can you tell me a little about the Red Tank! zine?

Sure, I like zines and have a small collection. It’s kind of a common thing for punk bands I’ve heard, though maybe not so much anymore. The first issue just has a lot of flier art, updates about the band, and there’s a reprinting of the tour diaries I kept from our very first full West Coast tour. I guess I just realized it was a fun project to do, and that a band with a nearly 7-year history probably has a lot to talk about that most people aren’t aware of.

Really, when that whole ordeal happened with our stolen van, I just realized how many people really loved and cared about this band. You can feel kind of alienated and delusional for caring so much about something sometimes, but we just had this massive outpouring of support from people I hadn’t heard from in years…people who used to play in the band, people who we had met on tour, fans I had never met, or old friends who told me they really dug the new record. It was just this really disorienting outpouring of support in a really shitty moment that was kind strangely validating. It made me realize how many people cared about something that I often worry I might care too much about. Or, at least, people cared enough to make sure that we were okay and that it wouldn’t stop us. It was pretty life-changing.

I guess the zine is kind of this idea of making that world more accessible to people – like, letting them know how much history this little band has, why we do it, and all that goes into it. It’s also, I guess, kind of a weird way of reconciling zine culture with a relatively new digital world–we put the first issue up for free online and we’ll have some at our merch table, but people can also subscribe on our Patreon to get mailed copies and other goodies, help cover costs of printing, and ideally help us fund some of our activities. 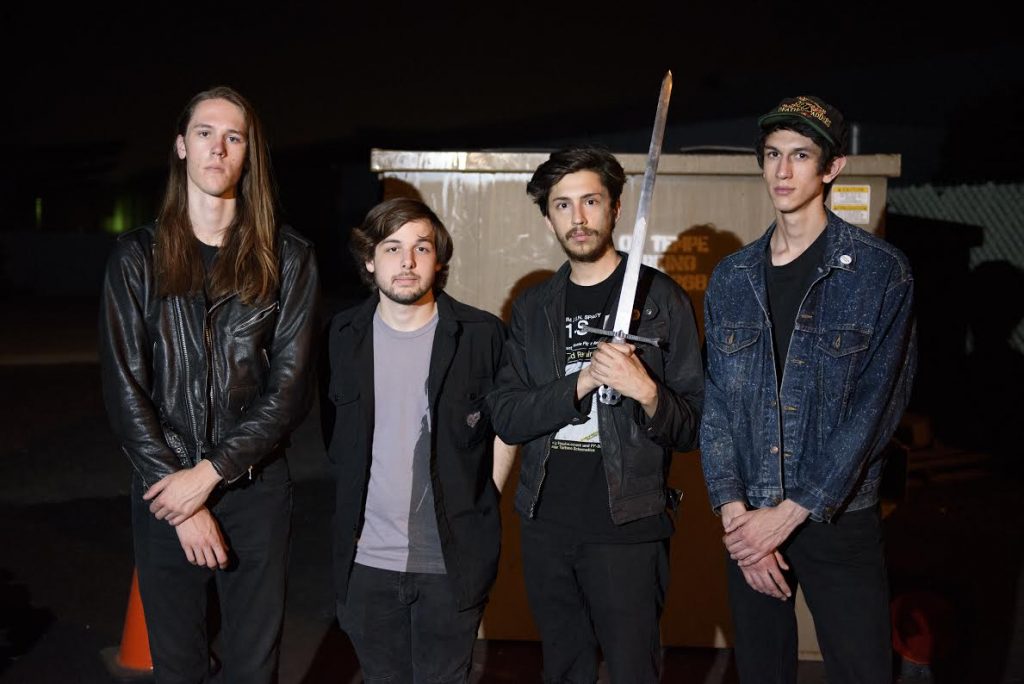 You’ve obviously had some rough and tumble times on the road. Any of your previous tours leave you with some life lessons you’ll be taking along with you this time?

I think there’s a lot about being in a DIY band on the road that you probably couldn’t learn from most other places. It’s just this really strange, stressful ordeal where you see the most bizarre corner of peoples’ existence in weird cities for a really brief period of time – which makes everyone even more enthused to share it with you.

Life lessons might be that you probably can’t afford to eat breakfast food at a nice restaurant every day in a different city, don’t drive through snowstorms, and that there are few circumstances where you aren’t best served to be calm, kind, considerate, and empathetic. It’s important to take responsibility for your actions and how they affect others – especially in close quarters when physical and mental states are likely on the fragile verge of complete exhaustion. I guess I’ve also learned that touring can be tough, but it’s also one of the best things in the world.

What’s next for Red Tank! once you’re back on home turf? New music in the works? More zines? Local gigs? Tell me everything.

Uhhhhhh… Well, there’s a lot going on that’s hard to keep track of. I’ve been writing a lot of material (too much) for a new full-length that needs to be whittled down, sorted through, and recorded. We cut some demos of a few songs a little while back, but those will likely never see the light of day in that incarnation. There will be more zines and anywhere from 1-3 music videos debuting in the next few months. I’m thinking about moving to Los Angeles in the Fall, so things might get pretty hectic. I’d also like to buy a van and do a national tour in the next year.

A lot of people say that we play too many local shows, but as a musician, one of the only things I ever want to do is play music and share it with a room full of people – so I can’t bring myself to compromise much even if it means we might be splitting our draw by playing 3-4 shows a month instead of once a month. With that in mind, I think we’ll still be playing too many live shows until we can’t anymore, so I’d encourage people to come see those especially if the band won’t be in Phoenix too much longer. 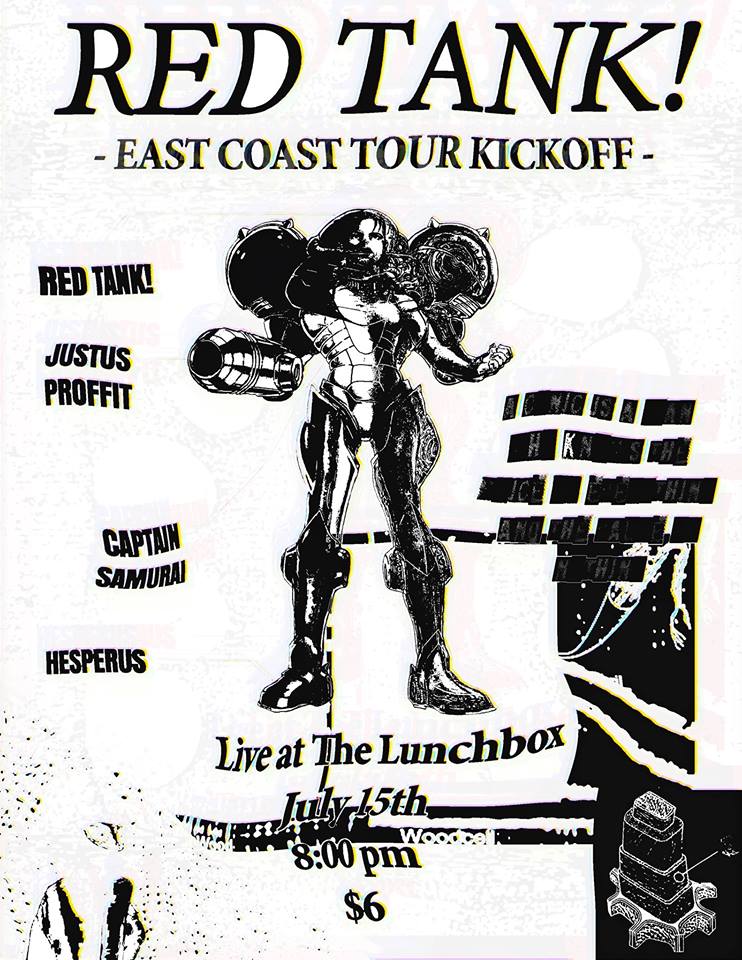