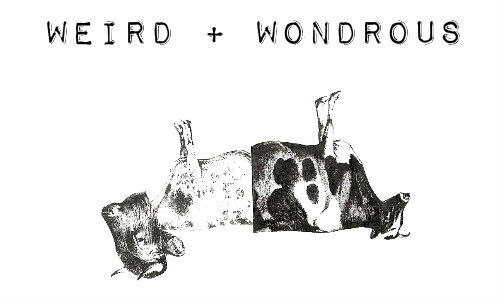 The electronica quintet from Leeds known as Vessels has some big things in the works… like this hot new jam which features The Flaming Lips. Yes, folks, Wayne Coyne provides the lyrics and vocal stylings while Vessels gives shape to the engulfing soundscape on “Deflect the Light”. Vessels released this track in anticipation of their forthcoming album which is due out September 29th. The new release also features guest appearances from other artists like John Grant, Katie Harkin, and Vincent Neff (of Django Django). There is a buoyancy and an optimism that pervades “Deflect the Light” so it’s the perfect mood boost, any time of day. Give the the single from Vessels a spin below or head here to score your own copy of the track.

The quirky sound of Cherie and Renno might sound vaguely familiar. Maybe that’s because the pair formerly performed together in the band Izabo. Cherie and Renno have a totally unique sound and that might have something to do with their one-of-a-kind instrumentation. The soundscape features a “home-made instrument – a wooden, electronic, multi-synth Viola that Ran, the frontman, built from parts he collected throughout the years.”  DIY multi-synth viola? How could we not love it? Cherie and Renno has a funky punk vibe and enough energy to shake down any club, both aspects you can hear on their new single, “Meow”, available below or through iTunes here.

“Too Long on the Vine”

The artist known as Quasi-Stellar Object from Olympia [WA] just released his second solo album, Last Ditch-Digger, which offers this short and sweet number. “Too Long on the Vine” has an easygoing indie-folk sound that carries an impending sense of an end approaching in its cheery melody. For those of you who enjoy the single, I definitely suggest delving into the complete LP from Quasi-Stellar Object, but you should know that the rest of the album is a bit more pensive (and a little more strange… meaning not quite as “accessible”) than one finds on “Too Long on the Vine”. Give the single from Quasi-Stellar Object a listen below and then head over to Bandcamp for Last Ditch-Digger, the LP.

Dave Neff might be from The Old Pueblo but he now calls New York home. Fear not, he didn’t leave all that desert weirdness behind when he left Tucson. His single, “Whatever You Want”, comes to us from Neff’s latest EP, In Imperial Country, which came out in April. Dave Neff creates bedroom nerd rock that sounds like it came out of the garage – without sacrificing that geeky core. The summertime energy and retro rock bounce of “Whatever You Want” makes the single sound like it could easily be playing in the background at Bayside High which I’m sure will thrill the 90s-revivalism-loving Millennials out there. Give “Whatever You Want” by Dave Neff a listen below or here for the complete EP.

The Invisible Teal is the new undertaking from Todd Hoover who some of you (like me) might remember from his Black Rose Mansion days. To this new project, Hoover takes with him his powerful vocal prowess and musical flair for the dramatic – two factors that first locked me into BRM fandom. And, while there are some interesting permutations in the track,  the song does feel a little too disembodied at certain moments (like in the intro), but I encourage you to stick it out. “OMG” is exploring new aural arenas, not just rehashing what’s worked for other artists before. And, as with any experimental undertaking, some things are going to work and other things might warrant a revisit. This single comes to us from Debt and Quandaries, the new album by The Invisible Teal that is currently in the works. Check out the single below and then head here to show the artist your support by contributing to his album fundraiser!