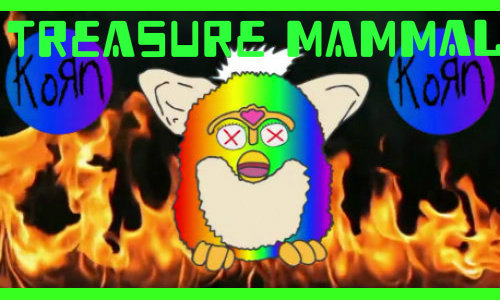 Treasure Mammal teamed up with local creative Robbie Pfeffer to craft a brand new music video and we’re stoked to be the first to share that video with you today!  Of course, we had a few questions for the team about the making of “Selfie Stick”, the prize pairing of T-Mammal and Pfeffer on this project, and what’s next for the rambunctious bunch of music makers.

So, you teamed up with Robbie Pfeffer to animate this new music video. I have to say that the T-Mammal/Pfeffer combo seems like the dream team. What brought these two forces together for this new visual project?

Treasure Mammal: After seeing several of the animations that Robbie had created, I definitely thought he was the right person to create the video for “Selfie Stick”. The TMammal/ Pfeffer combo is a lot like Kobe and Shaq. Unbeatable when using the triangle offense against any team.

Robbie: Abe brought up the idea a while back and now that I’m trying to do more animation I hit him up earlier this year and said I think I can swing it. Animation is a super slow process so I’m glad it worked out!

Where does this track come to us from? New album in the works?

TM: A new album is in the works and it is tentatively titled, Honey, I Crunked the Kids.

Where was the single/album recorded and is there an ETA for the release?

TM: We recorded at my house with Glob and at Glob Headquarters aka Slime Castle. I think the album will be done in early 2018.

Treasure Mammal has taken on many forms over the years through the inclusion of various players. Who is currently on Team T-Mammal? And, of those players, who is including in the music-making process as opposed to the live experience?

TM: The current roster for Treasure Mammal is Jef Wright, Jef Wrong, Audra Carlisle, Roddy Nikpour, Ryan Stephenson, Taylour Geiss, Matthew Scholtz, Yuri Choo, and Mike Hissong. This list doesn’t include the peeps that are in other cities. I would say the only people involved in the music making process are Jef Wright, Jef Wrong, Mike Hissong, myself, and the environment I’m in.

Treasure Mammal often hits on the kitschy points of pop culture and this new video is no different. It has everything from Faygo to Furbies. I have to ask the question… is the music meant as a joke or as cultural commentary? Or is there no real difference in your view?

TM: It’s definitely more of a cultural commentary type thing.. I like to wrap certain things/ products/ ideas that are jumping out at me at the time. For some reason, Selfie Sticks just kinda popped out at me. What made it really come to my attention was the fact that I read an article about someone falling to their death in the Grand Canyon because they were taking a selfie on the edge.

And, since you brought up the subject, what’s your stance on “selfie culture”? Narcissism run rampart or a component of self-exploration and greater connectivity in the Internet Age?

TM: It’s not so much the narcissistic culture we have a problem with, it’s the proliferation of “hands free” culture, enabled by technology, that’s encouraging us to disengage from the physical world. Years ago, if you needed an answer to an important question, you had to boot up Windows Vista, wait for Internet Explorer to open, type in www.google.com into the address bar, and only then could you get an answer. Physically interacting with technology gives you time to refine your question – maybe answer it yourself, or if you’re with other people maybe someone could answer it for you. Now all we have to do is ask Siri who the last person on the moon was or tell Google to turn on the bidet.

Robbie: I’m personally uncomfortable taking pictures of myself and I’m one of those people who huffs and complains about how dumb it is to film a concert while you are at a concert, but at the end of the day if something makes someone happy and feeds the unquenchable thirst of our personal data absorbing tech overlords, who am I to protest?

So, what’s next for Treasure Mammal? More music videos? Tour? Upcoming Shows dates? Expanding the stage show to include pyrotechnics?

TM: We will be performing the new and improved Tiny Town Times release show at St. Charles Tavern in Tucson on July 7th. The Tiny Town Times is a hand made quarterly publication created at Tanline Printing in Tucson that features the work of local writers and artists in Tucson and beyond. I’m excited about that for sure…

We also have a tour coming up in late July / Early August with Glob.

We have a new song/ video in the works called “Team Work.” I specifically made this song to debut the Multi Suit that our band member Audra Carlisle has created. The Multi Suit is a spandex suit that can fit four people simultaneously. The suit is connected at the hip and is in the shape of a circle. The people that are inside of the suit can either face inward or outward. I am working on having these available for custom orders and I would like to include activities to partake in while you have the suit in your possession.

As far as pyrotechnics during the show goes…. I’d like to see Ryan Stephenson burn his pubic hair while we perform but nothing more than that…