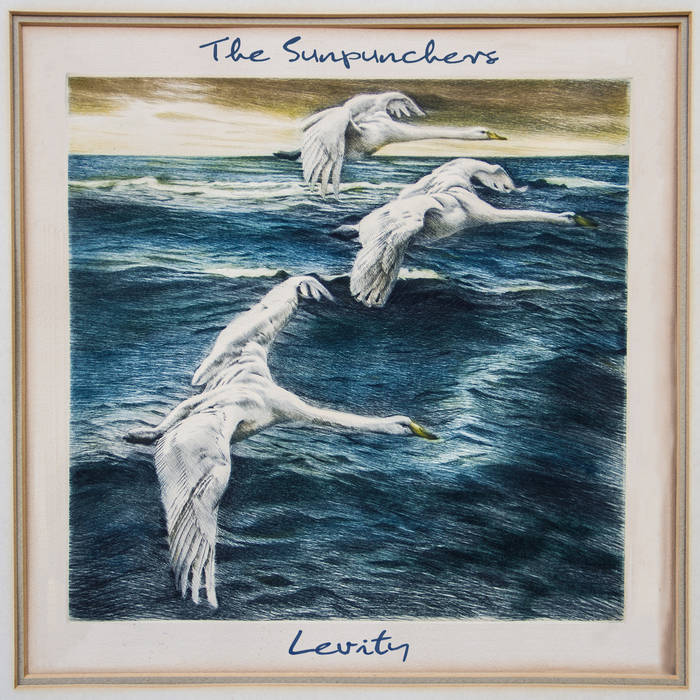 The SunPunchers released their much-anticipated debut LP last month and I’ve been entrenched in Levity pretty regularly since then. There’s something about the band’s vintage sound that takes the listener back to a more hardscrabble time. So, the longer I listen to this album, the more stoic I become. Levity reminds me of the beauty in the struggle for honest and simple living.

From the start of the opening track, “Brown Metal Box”, the listener will realize they’re in for something special. The arrangements are subtly exquisite beneath a warm, front-porch veneer. “Screwtop Head”, one of my personal favorites, comes next with its haunting grace and ruminating lyricism.

In all honesty, every track on Levity is unique and enchanting. There are all these tender moments of aural beauty that sit nicely next to the wry, unflappable humor interwoven into the lyrics.

In keeping with the series, I had a chance to ask Betsy Ganz of The SunPunchers some questions about Levity, influences, what’s next for the band, and more. Check out our Q&A below, but first, maybe hit play while you’re reading…

Carly Schorman: So, to get us started, who are The (official) SunPunchers? And who else joined in for the recording of Levity?

How did The SunPunchers first start playing together?

I started playing as a duo with a mandolin player named Jeff Schnuck and recorded an EP in 2013 and played with Lindsay Cates on bass, Jon Rauhouse on pedal steel and banjo when he was off tour, Henri Benard on drums and Fred Reyes on bass clarinet/alto sax. We met Dom when we were recording the record at 513 Recording and he was available moving forward.

The lyricism in this album is so vibrant, as is the instrumental arrangement. Just curious what the songwriting process is like for The SunPunchers? Do you work on songs together or do different band members assume different roles until you achieve your end?

I wrote the lyrics and melodies and had some of the instrumental parts layed out (see attached photo of road map). Jon Rauhouse came in and has this intuitive gift to create and play a part that cements the feel and intention of the song. Thanks forever to Jon and his sense of humor and practical advice.

Dominic, Lindsay and I improvised a lot in the studio- Dom is really good at production , helping to trim down or build up the song to reveal it’s essence. He played more than a few instruments himself to get to the heart of things and mixed the record with input from the band and Catherine Vericolli of 513 Recording. Lindsay improvised some bass hooks that are so unexpected and killer. She knew what she wanted to play and why and had a clear eye on the direction we were going.

There’s a vintage charm to the sound of The SunPunchers that I think contemporary listeners will really love. What musicians do you draw inspiration from to give shape to The SunPunchers’ sound? Does that list vary considerably from band-mate to band-mate?

I love the image that was used for the cover art on this album. Where did you find the artwork? (I hear it might be a thrift store find.)

Indeed! I found that etching in a thrift store on Mohave Ave. I took it apart and found that it was drawn in Germany in the early 1900s. The artist name and title is illegible, but beyond that we thank the thrift store goddesses for their generosity, and we hope to someday track the artist down. It’s an amazing image and captures the mood and feel of the record.

The SunPunchers hosts a weekly jam (and toast) session at The Lost Leaf. Can you clue in our readers as to what they might expect at Tuesday Toast?

We host Toast Tuesdays at The Lost Leaf every second Tuesday of the month starting around 9 PM. We invite and encourage singer songwriter’s to air out their new song undies in a safe environment, while we prepare and serve free Nutella Toast to the people! We received a sponsorship from Dave’s Killer Bread for this community building event and encourage everyone who shows up to donate new underwear/socks for the men and women of Circle the City, healthcare for the homeless.

Now, that the album is out, any plans for a short respite or are you right back to working on new material? I also hear the band will be participating in some fun festivals in the post-summer months.

Getting gigs on the books as we speak, and demo-ing new material. We’ll add dates as they are confirmed onto facebook, twitter, and insta.