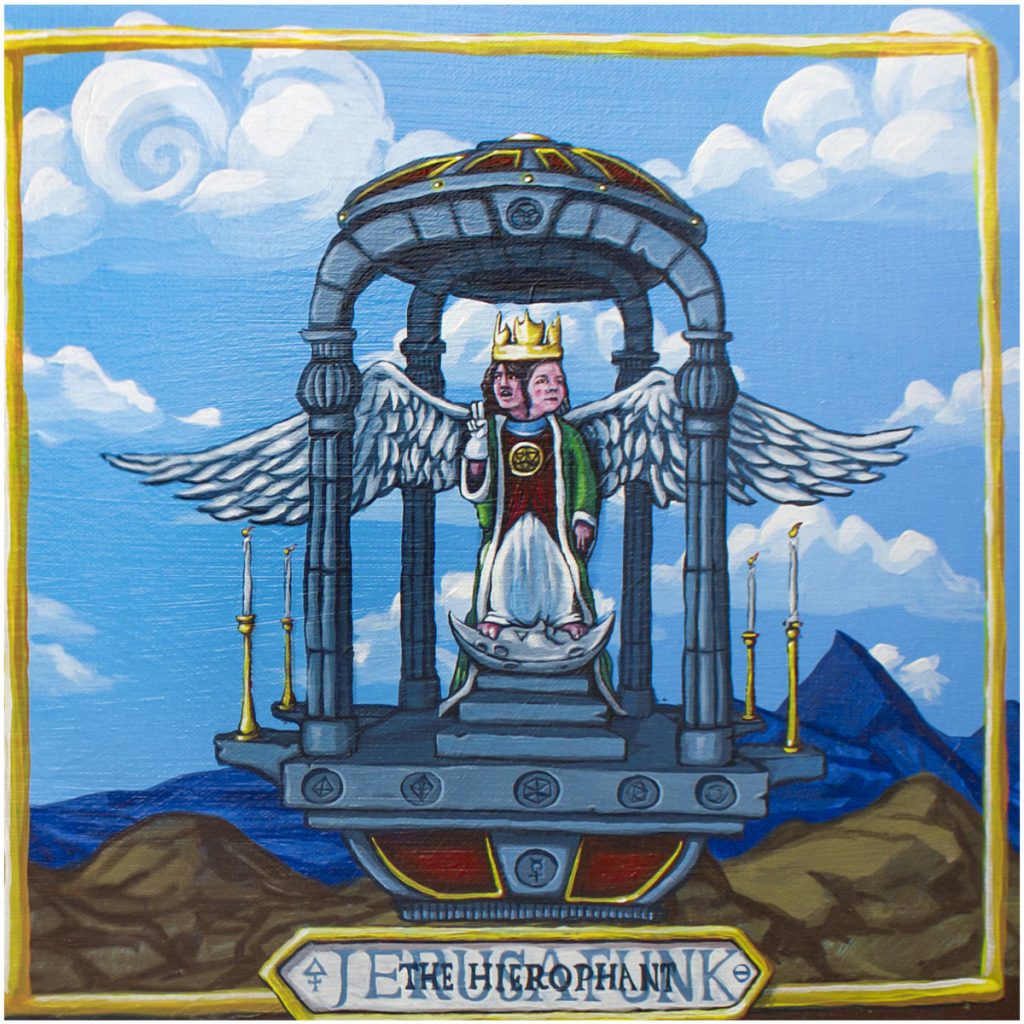 The Hierophant, the new album by Phoenix megagroup Jerusafunk will add even more dots to your world-music map as you delve into the band’s sound. Jerusafunk isn’t confined to one region of the greater globe, but seems to draw a host of influences from Bossa Nova and Cumbia to Polka for their debut LP which comes out on Thursday at the Crescent Ballroom.

This band of troubadours draws inspiration from such disparate global points as to turn appropriation into appreciation with their pure and unifying love of music.

It’s been almost two years since Jerusafunk dropped their debut, Sweat & Glitter, so fans have just been itching for some new jams to help pass the time between shows. And, this week, the band is ready to oblige. That’s right, kids. The funky klezmer collective from the PHX will be unveiling their sophomore effort, The Hierophant, this coming Thursday.

I had a chance to ask Jessie and Chris of Jerusafunk some questions about the new album, J-Funk future plans, and, of course, klezmer. Read our Q&A below, but first, hit play on “Gateway Movement” from The Hierophant below…

For the record, who is part of the Jerusafunk cast of characters?

Where did you record the album? And how did you fit everyone into the recording space? Or was it done in rounds?

We recorded the album all over the Valley. All of the rhythm section tracks and live full group tracks were done in schools, free studios and the J-Funk house. All of the overdubbing happened at the J-Funk house. We also recorded our friend Alejo in Guatapé, Colombia in his and our hostel rooms (you should Google that town… it’s something else, I’d move there in a heart beat) [Editor’s Note: Boom]. Some of the rooms were quite tight for the live recordings so we just recorded in a circle, more or less, and made it work.

I want to hear about J-Funk: the Inception. What initially spawned the idea for this musical collective?

To quickly sum up the first and second incarnations of Jerusafunk: Jessie and Chris met in Flagstaff and started the band with a lineup of guitar, clarinet, tenor sax, bari sax, accordion, and drums. After, Jessie graduated from NAU we moved to Phoenix and recreated the band. We plugged in and revamped the line up to electric guitar, bass, clarinet+pedal, tenor sax, percussion and drum set.

Then, after traveling through Central and South America for two years, Chris and Jessie returned with new material for the current incarnation. Chris and Jessie had always dreamed of playing and writing with a larger group of musicians to help realize these greater compositions, so they asked friends and friends of friends to fill out the band, and the intimacy of the group has really thrived because of everyone’s pasts with one another.

Okay, so the klezmer/funk thing… how did that come about? Were these musical styles you grew up listening to? Or something that you stumbled into as burgeoning musicians?

I think I can safely say no one in the band grew up with klezmer, except for maybe Jeremy, our drummer; his mom is Jewish. Jessie’s the one who picked up klezmer; her clarinet teacher encouraged her to listen to clarinetists from all over the world, and upon listening to two clarinetists in particular, David Krakauer and Giora Fiedman, she started focusing her efforts on playing klezmer.

Funk is an american pastime- we all love the classics and then some. More than half the band are jazz musicians, so we like get down to the cerebral psychedelic jazz funk of Herbie Hancock, Miles Davis, and Sun Ra quite a bit.

When we first started the band Jessie was learning about ethics, identity and musical fusion in ethnomusicology, and was up to the challenge of modernizing an old dance genre (klezmer) with a new dance genre (funk) to see what kind of sounds would emerge. And, of course, then our travels to Latin America morphed the J-Funk sound even more as we discovered and learned Colombian and Andean music.

And we definitely need to know what the songwriting process is like. Is there a process? Do you get together and jam and see what emerges? Or is there a member (or a few) that shape out the songs and present them to the group for a full fleshing out?

Well, for the first album, Chris wrote a majority of the sketches for the songs. We usually create melodies for horns, chord progressions, and form ideas, then hash out the grooves and sections for improv. Luckily, everyone in the band has creative juices so they contribute their own voice in every song. Torrey (trumpet, not trombone) has a very modern writing approach in that he records a whole song, then brings it to the table and we try to further his ideas the best we can.

Now, you cats have been out on tour and I hear you might be planning for another adventure. What’s it like touring with, like, a million band members? Is there a caravan involved or do you all turn one van into a giant mobile cuddle puddle of moving chaos?

Bed time is where the real snugglin’ begins. For the last couple of tours, we’ve had to use around two to three vehicles. Which gives us all a little more space, but its a lot more awkward to coordinate arrival times. This tour in July we’ll be renting a 15-seater just to simplify things…

But traveling with a gang of 8-10 has been absolutely hysterical. We’re all very charismatic people and feelings rarely get hurt, thank goodness. Sure, there can be daily turmoil, but there is definitely safety in numbers. We take over any space once we arrive. Touring has grown less chaotic with experience, so if that pattern persists this first East Coast tour should be something amazing.

You seem like a band with a mission. Does Jerusafunk a mission statement?

Our mission is we want everyone to resonate and learn from the music we create, but what art doesn’t? We think that if people can latch onto the challenging musical and philosophical concepts we present, maybe then people may discover something new about themselves.

Or, if they prefer to just listen, they can feel sexy and dance to grooves they may have never heard before and hopefully dig deeper into a world of music and culture that seems to defy time and history. Culture is a construct; not as a wall but a bridge.

What’s next for J-Funk? Taking a break after the release show? Or moving forward with the sexual revolution of klezmer?

WHAT’S NEXT?!? WORLD TOUR!!! Really though, we want a company to pick us up so we can tour Europe and the rest of the Americas. There has been talk, no fixed plans, but talk, about PAO and J-Funk doing a little AZ/CA tour in the future! Go and freak Cali out with a 30 person funk entourage! We have about enough material for to start writing for the next album, so it’ll be back to the studio(s) and bedroom for the next big piece. Hopefully we’ll start discovering new grooves from other parts of the planet and weave them into our own nasty little hodgepodge. Maybe find the new groooooooove? Oh, and ya know, sexual revolution.

Make sure you head to the Crescent Ballroom on June 15th for the Jerusafunk release party with Nick Perkins, Zach Alwin & Duck Funk, and DJ Mitch Freedom. More info on that event here. 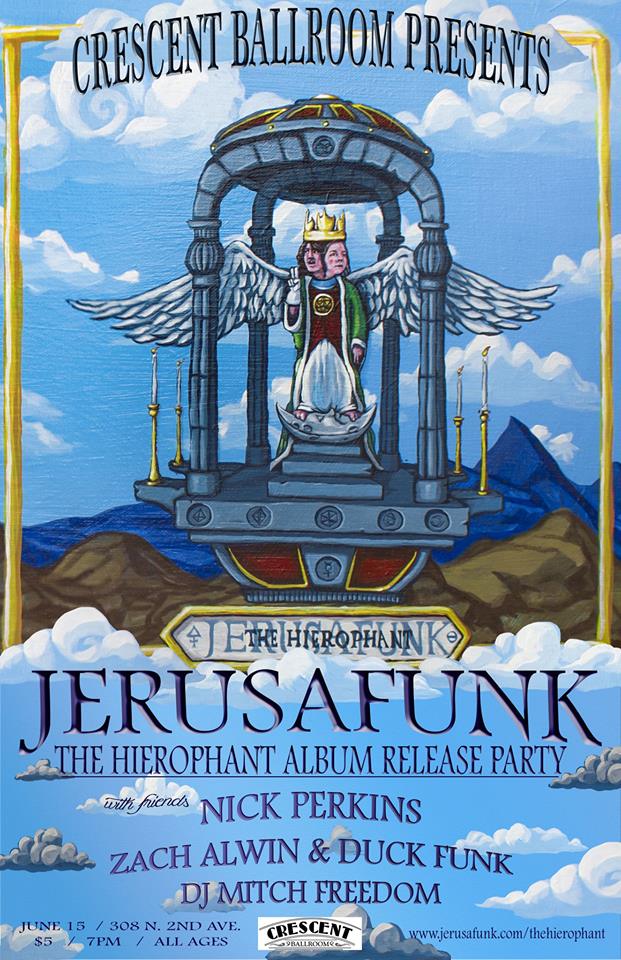