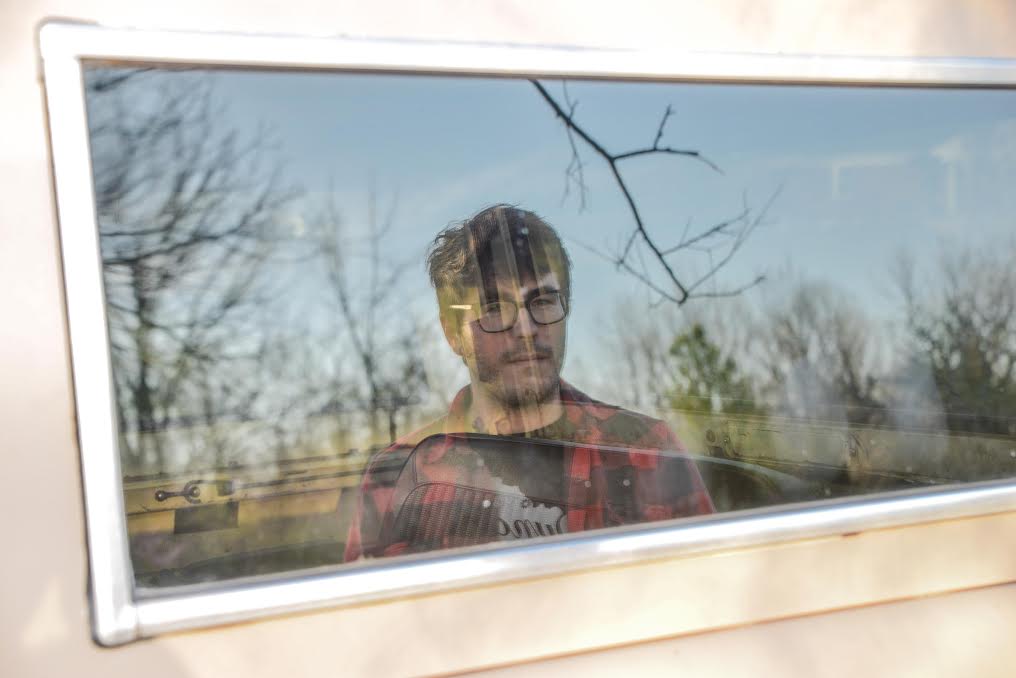 Now, I first heard the music of Andrew Shockley (aka Delafaye) with the artist’s 2016 EP, The Hilltop. His somber style and heart-torn voice immediately caught my attention. Since then, I’ve been trying to keep up with the Lousiville artist’s musical undertakings.

After signing with the London label Street Mission Records, Delafaye was ready to undertake the recording of Highlands which is set for release this coming July.

“West Coast Vibes” comes to us from that release. The single creates a easygoing atmosphere like that chill morning fog that rolls in over coastal California. Peaceful and meditative but not quite as optimistic as a seaside visit in the bright of full daylight. This track is a promising taste of what’s to come from Delafaye.

And, without further ado, here’s the new single from Delafaye… give it a spin while you read the interview below..

YabYum: So, this is the first single from your forthcoming EP, Highlands, which is due out next month and I see you’re teaming up again with Street Mission Records for this release. Just curious how a musician out of Kentucky connected with the London label?

Delafaye: Yeah, always exciting to release new music. It’s funny, I was posting my music on Soundcloud just for something to do. Dani, with Street Mission, somehow came across it and sent me an email asking if I wanted to sign with his new label. I laughed at first because it was hard to believe but it has turned out great and has been really enjoyable.

I also really want to know what led you to choose the moniker “Delafaye” for your music-making?

I chose Delafaye because it was a street that my good friend Kendrik lived off of. We were cruising around one day and I was trying to think of a name that would be original and not terribly corny. I saw the street sign and instantly knew I would use it. We played music over there all of the time so it felt fitting. Since then I’ve tried to incorporate Louisville into all of my music. The Hilltop being where I currently reside and I’m always hanging out in the Highlands.

Where did you record the new EP? And who performs on the recordings (in addition to yourself)? Did other artists kick in their talents?

I recorded the EP in my apartment. I like to do the writing and recordings alone just to push myself as an artist. I see creating music as a getaway from the boring reality of everyday. It’s my favorite hobby and something I will always do. As far as collaborating with other artists, maybe that will happen on the next EP/album.

I was quite taken with The Hilltop which came out in January. January to July is a pretty quick turn around.

Thanks, I’m glad you enjoyed it! Yeah, I finished up this EP a few weeks ago and I’m working on new material now. I think it’s important, especially as a new artist to get new music out there.

There’s such a calm pensiveness to your songs that immediately captured my interest all those months back when we first heard you. Who are some of the songwriters you draw inspiration from?

I’ve always enjoyed calm music myself; something to take the edge off after a long day. I think I’m inspired everyday by different songwriters. Growing up, the ones who probably really did it for me would be Dylan, Simon and Garfunkel, and John Lennon. There’s so many but I’d say those were the big ones.

All of the above hopefully. I’m playing with a full band now and we have a nice show coming up opening for San Fermin. Hopefully, this kicks off more shows in the future and possibly a tour. Filmed a couple acoustic videos that should be released soon and I’m always writing music in my spare time.

For more Delafaye, check out his SoundCloud page or head here to secure your Pre-Order of his forthcoming album!