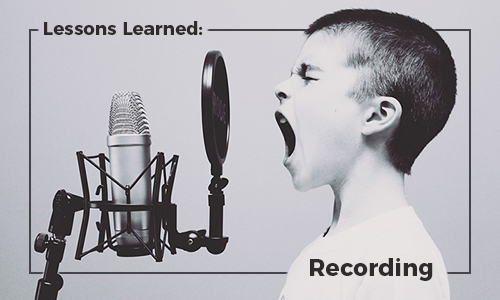 So, you’ve written your first song and you’re finally ready to go in to record? Or maybe you had an impatient vocalist that just booked the studio time in advance and now you’re scrambling to pull everything together. Either way, you want to know what to plan for and that’s what I’m here for.

If you haven’t already, check out my previous LESSONS LEARNED articles where I give you the run down on STARTING A BAND and TOURING.

Chances are you have a friend with a home studio. Maybe it’s a friend of a friend or perhaps you’ve been approached online by someone trying to knock out their final project for their recording class. Let’s face it, recording equipment is getting cheaper and easier to use every year. What once would cost you thousands of dollars can now be ripped off any torrent site and sloppily learned. Don’t discount the value of experience though. Just because anyone can record from home, it doesn’t mean that everyone should. Sometimes you’ll luck out and find the next Rick Rubin but you also risk the chance of thinking you suck more than you actually do just because you didn’t want to spring a few extra bucks for quality.

I’ve Got To Admit, It Isn’t Getting Better

When you book studio time, you’re normally paying per hour or for a full day. This means that you’ve got a finite amount of time to nail out drums, bass, guitars, vocals and whatever other “artsy” stuff comes to mind in the 11th hour. I know, the song is only 4 minutes long but it’s a whole new beast when you tear it apart piece by piece. It’s important to find the beauty in perfections. Sure you can spend the next 4 hours perfecting a single riff but more often then not, you’ll just frustrate yourself to no ends and decide that you’re first few takes were your best. Don’t stress, that minor crack in your voice makes you sound human.

Play The Drum For Me, Ba Rum Bum Bum Bum

Nothing eats into studio time more than drums and I don’t mean drumming to the actual songs. If you have an 8 hour day planned for drums, expect the first few hours to be spent setting up, mic’ing and then tediously sound checking each piece. Don’t worry though, this is arguably the most important part of your record. If you get drums right, everything else is a Nirvana solo.

The More, The Opposite Of Merrier

Everyone likes to be surrounded by friends and adoring fans, right? It may seem like a fun idea to bring 10 of your closest acquaintances along to watch the magic happen but remember, you’re on the clock and they’re not. $75 and hour can quickly turn into an expensive YouTube and chill. You’ll soon find yourself re-tracking because your bestie can be heard watching Fail Compilations in the background of the track.

Don’t be afraid to try things in different ways. It’s easy to get the original phrasing of a riff or vocal melody stuck in your head but sometimes the best results come from experimentation. Be open to constructive criticism from external sources and stop being your own worst critic. Leave that to the angry bloggers and internet trolls.

When you record you’re capturing a moment in time. Just like a picture, you’ll look back at it as not only a song but an experience that you were a part of. Make it a good one! Prepare for what you can and when things don’t go exactly to plan, make a new plan. Have fun and the people that hear the song will too.