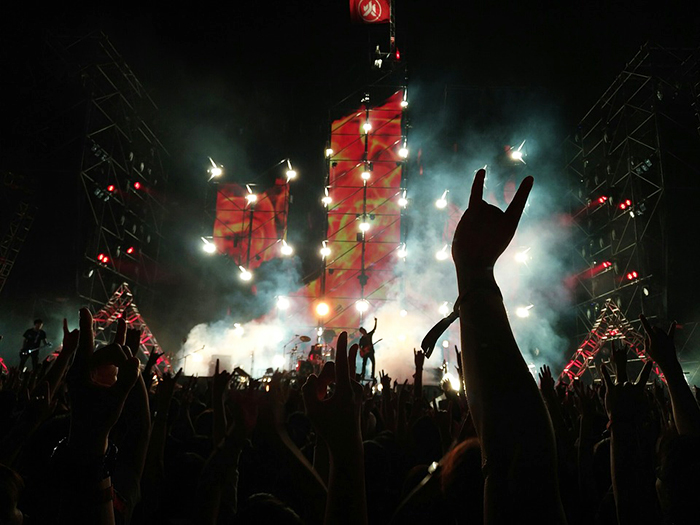 If an album is “dropped” in the forest and no one is around to hear it, does it make a sound?

The answer is only by the ears of the other band members. Band promotion feels weird. Mixing your art, what you love, with business. Let’s be honest though, sharing that creation with your immediate friends and family is cool, but connecting with others outside of those circles can be something really special. So don’t be afraid to be as equally creative in promoting your music as you were in making it.

Far too often bands rely on a single post on social media to get the word out there. The truth is that social media platforms are creating ever more complicated algorithms that will stamp out any chance of going viral with self promotional content. So don’t settle for 2 likes (one of which was likely your own) and do a little digging on how to maximize your visibility; what to post, where, and when to do it.

First off, I’m not happy with the pun in that title. Let’s move past it. So you’re punk rock and you’re not going to give the mythological “Man” (or woman) a dime of your hard earned money just to boost a post. I get it but what if it wasn’t your money? Or what if you could get a quick return on that investment? Well it’s all possible and in more ways then I can cram into a single paragraph.

A few things to consider; you can find free or at least discounted $$$ for first time advertisers all over the internet. Just do a bit of googling and make sure you’re on a trusted site. You can also build these promotional bucks into your band’s guarantees at shows. Normally ask for $100? Negotiate $120 by letting the promoter know that the extra $20 is going directly towards getting the show info and ticketing link in front of your fans.

Finally, consider it a small investment. The thought behind any promotion should be finding a balance between what you put in to it and what you get out of it. If you’re not seeing an increase in show attendance or record sales to offset the investment, you’re either targeting the wrong audience or have a lackluster product. Let’s hope it’s the former.

We all know that a picture with text on it is worth a thousand words (or likes) but is it really worth sacrificing your brand? That’s for you to decide. If you’re the band that only posts memes to great response, don’t be surprised when the text only update about next Friday’s show only gets interaction from your favorite nana. On the opposite side of that, if you’re only pushing shameless self promotion from your pages, you’ll quickly find that the only person there to see it will be your shameless self.

Try to find a balance between band related content and fun ways to drive more natural interactions. Who are you, what you do and why people should care are great questions but even better questions are who are the people that follow your page, what do they do and why do they care about you? You wouldn’t go to a social event and only talk about yourself so refer back to the first word in “social media” and act accordingly.

Everywhere you want to be.

Where do you find out about new music? Is it a particular website or blog? A playlist on Spotify? Fliers at your local music shop? Or maybe just word of mouth at shows. Be present on all of those places. The independent band that’s making waves isn’t doing so in the largest pool. They’re the ones finding smaller communities, being an active member and contributor and then slowly finding the right time and way to introduce their own music.

You can pay a team of people to do it or you can learn how to do it yourself. Once you’ve determined your pitch, leverage the results of other artists in your genre for where to send it. Find a band that recently released an album and google “[BAND NAME] Album Review” or “[BAND NAME] Interview”. This will give you a huge pool of outlets to contact.

Another variation of this is following a PR Agencies page and seeing where they’re getting their bands placement in. Have a well defined “ask”, include what’s in it for them (exclusive content, sharing their site…) and do the work for them by catering your press release to the content their site posts. Above all, be sure to make it concise- no one wants to get hit with an unsolicited wall of text.

Finally, truly value and reward those that are spreading word of mouth. There’s absolutely nothing more valuable to the success of your band then the buzz from those who already enjoy it. So give them discounted tickets, throw some free merch their way and above everything, build that relationship. It’s shocking to me when I see a band with a couple hundred followers not responding back to their small handful of comments or tweets. Or a band that’s blatantly using bots to post comments like “Nice post ?”. You’re no one special. The second you put yourself above anyone else just because you wrote a couple songs is the moment people will stop caring.

Brandon Kellum is the vocalist for the obnoxiously loud metalcore band American Standards. They play their home state of Arizona July 18th at Pub Rock in Scottsdale with Arsonists Get All The Girls, I Set My Friends On Fire, Kingdom Of Giants and West Cliffs