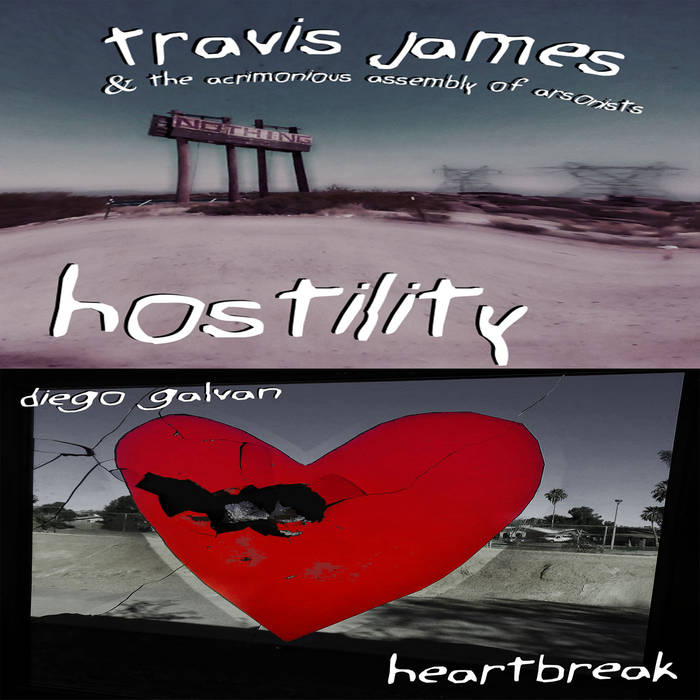 Mr. Travis James is going to hate this – I mean, I’ve already applied for the Witness Relocation Program, and dear gawd I hope it goes through before this is published – but IMO, he’s managed to combine the very best of the Cabaret and Punk, while at the same time, channel the very essence of Andrew Lloyd Webber and Charles Hart, and he manages to do this in the first two songs of this split.

I’ve always thought James had a tremendous lyrical sense. The linguistic gymnastics is only rivaled by the melody. I mean, “I’m setting out to prove that I’ve got nothing to prove, and I’ll prove it.” on “Enough” is the kind of nihilistic, middle finger he’s been proudly displaying on each of his albums.

“Fade Away” and ‘Like It Or Not” are musicals in of themselves. Close your eyes while listening and fuck if you’re not on Pollard Row in London. And never one to shy away from controversial lyrics, the “fading away” is “the power behind the badge” and it’s “the ground” is where he fancies the cops going.

Again, I hope my application goes through because, put the lyrics of “Pissing ‘Neath the Stars” into the mouth of Kate Bush or Tori Amos, and I buy it. Coming of James’ mouth, I buy it even more, because you can feel the vitriol against the acoustic folk-like strumming.

If you don’t hear from me in the coming months, you’ll know he found me. I love these tracks.

Take one part the poppyiest pop punk. Add the vocal stylings and melodies of The Dead Milkmen. Add terrific lyrics, and well, dammit if I’m not a sucker for this.

“Why Do Bluebirds Fly” took me completely by surprise. I mean, Galvan sings about a horrible break-up, and then, out of the blue, goes into the chorus of “Over the Rainbow” and it works so well, I just wish Galvan was around to write the original but then he’d be 109 years old or so, and we wouldn’t have this gem to listen to.

All in all, I really dig this guy. He really digs deep into his feelings and lays them out there for all of us, and you just want to give him a big hug.

And by the way, backup vocalist Jayne Robardey on “Life Has Been Empty” brings an absolute casualness to the performance that really had me wanting more…

Here’s where you can find it.