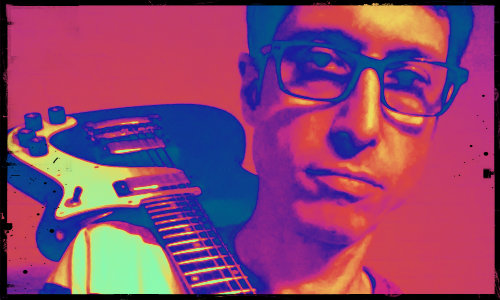 Local musician and tastemaker Steve Ostrov is a straight-shooter by day and punk-rocker with a penchant for pedals come night. Check out Steve’s stellar list of singles he thinks every music-lover should hear below and then head to Chopper John’s this coming Friday to see him perform live with his band, The 16 Eyes. More info on that event can be found here.

Five minutes to write a terrible poem. A lifetime to enjoy the results. This is what happens when a bored teen reads too much. Anyone could have done this, but John thought of it before the rest of us. Read the incredible story here.

This song from 1961 inspired too many rock songs to count. How many do you hear?

Eddie’s sax is swinging hard, but Shirley Scott’s Hammond work is what really shines on this cut. I wish more jazz sounded like this!

A zany “Zimmy” send up by a Canadian DJ. Or is this the embryonic beginning of rap? The lyrics are pretty ridiculous, but the understated music is really cool.

The Dickies
“Where Did His Eye Go?”

An unlikely target for punk rock ridicule. Sorry, Sammy, but this is how you write lyrics! THE DICKIES SHOULD HAVE RULED THE WORLD!!!

So simple and yet brilliantly weird, and menacing. Django did more with 2 fingers than most guitarists can do with all 10 and a music degree.

Killer stomping garage cover of an obscure R&B gem from Jimmy Hanna and The Dynamics. They released one glorious record and then dropped off the face of the earth. The flip, “Caught You Red Handed” is also a monster!

An amazing cover of an already amazing song. The guitar sure sounds like Jimmy Page’s session work although some would still debate it. Regardless, it gets me every time.

A substantial re-imagining of a classic piece of fluff. The chords are so dense and somber. I first heard this cut years ago on a Las Vegas radio show where Teller (of Penn and Teller) was playing recordings he liked. Well, it could have been him, but how would anyone have known if it weren’t?