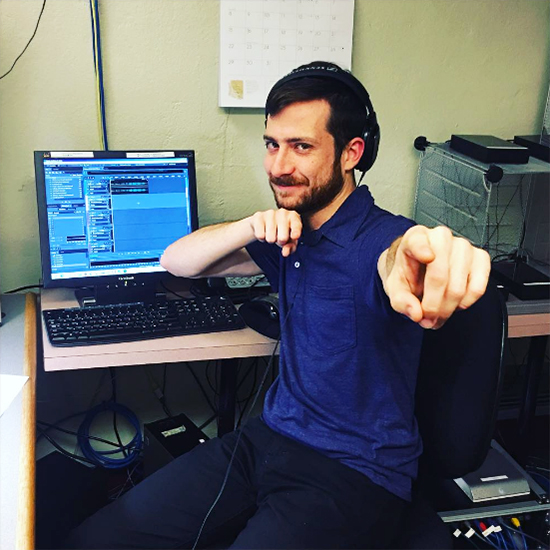 Musician, local tastemaker, radio-show persona, and all-around-rad-dude Roddy Nikpour is officially coming onboard #TeamYabYum and we just couldn’t be more excited to have him. In addition to his host of creative endeavors, from ambient music to Treasure Mammal dancer, Roddy will be joining us down at Radio Phoenix as our official producer. To mark this grand occasion, we asked Roddy to tackle our Tastemaker’s Ten and narrow his list of influential singles down. Catch him live on Radio Phoenix every 1st & 3rd Wednesday of the month for The YabYum Hour!

Explosions in the Sky
“First Breath After Coma”

This song was my first venture into the world of ambient, instrumental, post-rock music, which forms the foundation for the rest of my musical palate. I have shamelessly cried while listening to this album and every time I see them perform live. Sure, they’re the poster child for post-rock, but there’s a reason for that.

Yet another post-rock song, but with a different sense of emotion–this one is more about passion. What I’ve always loved about instrumental music is that it can apply to your emotions at any point in your life. There are no lyrics to dictate the meaning of the song, and this song has had many different meanings for me throughout different points in my life (and yes, I have cried while listening to this song as well).

Probably one of my greatest inspirations, Jimmy LaValle has, in my eyes, mastered the art of being a solo musician (although the Album Leaf often performs as a full band). He composes original music, writes soundtracks, and has time to be a dad. I have a fond memory of interviewing Jimmy on my ambient music podcast, The Post Office. He even borrowed my Mesa Boogie F-50 when he played Tucson and Phoenix back-to-back, which, to me, completely validates my decision to play a Mesa Boogie.

These guys are a testament to the weird, obscure stuff you unearth when working in college radio. When I was production director at KASC the Blaze 1330 AM, we received an email from this Scottish band, whom I’m so grateful to have interviewed. They’re these two nice dudes who compose educational music about space and perform for schoolchildren–something I can get behind. It also helps that they’re really groovy.

So far, Chalice Hymnal is my 2017 album of the year. I found this band when chasing the rabbit hole of record labels, which sometimes proves to be an effective way to find new music. Grails show a darker side to post-rock, and in this particular song, you can’t beat that driving bass.

The War on Drugs
“Disappearing”

Although I praised instrumental music for not having lyrics, the War on Drugs is one of the few bands whose lyrics resonate as much as their musicality. Plus, I love their live performances because they strike just the right balance between “this sounds identical to the song on the album” and “we added enough flair to make the live performance engaging.”

A good friend showed me Beach House, and their melodies are haunting. If I ever feel down on myself, I can listen to Beach House and remember I’m not the only one who’s ever felt that way, and it slowly chips away at any anxiety I feel.

I have to give a shoutout to Pink Floyd because I was forced to listen to them (thanks, Baba). I distinctly remember being on a road trip, and my dad saying, “You know, some day these lyrics will mean something to you,” and me thinking, “Psh, no, this will always be old guy music.” Well, here I am, in my mid-twenties, loving every minute of their music. This performance in particular exemplifies a well-executed musical odyssey.

This song, in some ways, just symbolizes the versatility of ambient musicians like Brian Eno. Plus, you can’t beat that timeless 80’s sound.

Meaningless! Says the Teacher
“The Wake”

It was really difficult to pick just one local band, but these guys sum it up nicely. There’s a surprisingly rich post-rock scene in the Valley, for which I’m extremely grateful. A lot of bands disappear (like Meaningless), but new ones are always on the rise. It’s nice to see instrumental bands mesh with bands who have more traditional sounds, and I hope that attendance to these shows rises. There’s nothing like watching instrumental musicians lose themselves on stage.

And, as always, here is an example of of our Tastemaker’s work –