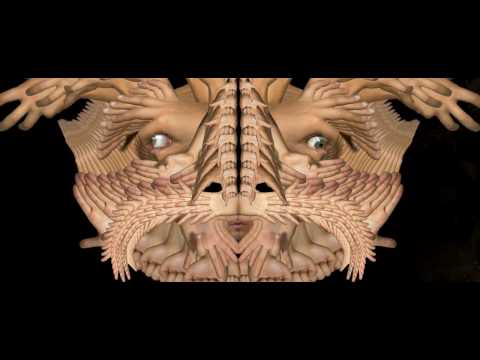 The NorCal duo known as SUNMONKS are gearing up for the grand unveiling of their first full-length album with a brand-spanking-new music video.

“Cannibal Wit” (as a single) creates quite a cinematic soundscape but I wasn’t quite prepared for the stunning accompaniment that the music video provides. One might describe this as a DIY effort given that the video was produced, edited and directed by SUNMONKS’ Geoffrey CK (songwriter) and Alexandra Steele (vocalist). Trouble is, when most musicians say “DIY music video,” it means a backyard, some homemade props, and maybe some of their more attractive friends.

SUNMONKS, however, appear to approach music videos as an extension of their creative process… not just visual fodder to function as eye candy while their song plays in the background.

And, we’re super proud to premiere the surrealist vision that is “Cannibal Wit” from the SUNMONKS right here and now. Make sure you keep scrolling past the video for our conversation with Geoffrey CK of SUNMONKS about the duo, making of the music video, and impending album. But, first, this…

YabYum: How did SUNMONKS come together as a musical force?

Geoffrey CK: The project was formed as a way to entertain our musician and artist friends. We used to play in lots of different projects, as vocalists or songwriters or arrangers, and there’d be a lot of downtime during rehearsals, or breaks during performances; so we just started playing whenever there was a crowd. After a few months of doing this, we started getting show requests, so we came up with a name we thought fitting, and started touring. It’s a bit unconventional to begin touring and performing before having recorded a single tune, but it’s the way it was done a long time ago; now, most music-based projects begin as a recording-project, and then move into performing.

Even though we’re based out of California, we actually played our first show as “SUNMONKS” in the west Texan town of Lubbock, but that’s a long story. The project is still an infant, but we’re excited about finally releasing this video and our first album!

Pretty trippy music video. I know the video was a DIY undertaking. Did you go into filming with a concept in mind? Or did you just decide to take some acid and see what happens?

The video wasn’t something we wanted to just “throw together”, so it involved a lot of location-scouting, post-production; we wrote screenplays, storyboards etc. We wanted it to look as sleek as we could make it, even though it was just two people with a camera. Our other videos lacked any kind of narrative-flow, and that’s something that we wanted to change this time around.

Initially, we didn’t intend for the “acid tab” to be exactly that; originally, it was supposed to be a “note” passed from Alexandra to myself. But when we looked at the footage, it was pretty clear what it was implying, so we just embraced it, adjusted the story, and continued. We both love the work of filmmaker, Alejandro Jodorowsky, and even though we didn’t have the production budget to get close to his style, we tried our best to make something that was beautiful, humorous, and also a bit strange, whilst still have some kind of discernible narrative.

Is this single part of a larger release?

This video is leading to the release of SUNMONKS’ first full-length album, called Two Play, out in early June. It was produced by John Baccigaluppi (Sea of Bees, Tape Op Magazine) and heavily features Mike Urbano (Cake, Bourgeois Tagg) on drums. There’s a Vice article about John, if you want more info on his work or background. The album was recorded at Panoramic House Studio, which is a newer studio. It’s the same studio where Band of Horses and My Morning Jacket recorded their newest albums, located in Stinson Beach, CA.

So both you and Alexa seem to have that vibrant-outdoor-NorCal vibe. How are you folx passing the time when not performing with SUNMONKS or making rad music videos?

When we’re not playing in SUNMONKS, we’ll often play in other peoples’ projects, or help people write songs, or go see our friends projects. We have a couple dogs, so we spend a lot of time outside, running around, hiking or swimming. When we’re in “recording-mode”, we’re often out in Stinson Beach, where we’ll go surf with our friend John Baccigaluppi, who produced our first album. Alexandra also makes videos for other acts; the last one she worked on was for folk singer, Tom Brosseau.