While some of you decker. fans might be thinking, “Didn’t we already celebrate the premiere of Snake River Blues?”, that just proves you’re not quite up to super-fan status yet. You might have enjoyed Snake River Blues, the album &/or live listening experience, and you might even have sampled Snake River Blues Black Rye Double IPA from Dark Sky Brewing Company, but you still haven’t really had a chance to look under the hood of the decker. music-making engine.

Matty Steinkamp of Sundawg Media set forth to create a documentary that pulls back the curtain on Sedona songwriter Brandon Decker as he prepares to take Snake River Blues to the Big Apple. And, on Thursday, May 18, FilmBar will host the public premiere of the documentary so all you decker. darlings can get a behind-the-scenes look at what happens before the band hits the stage.

For Snake River Blues (the documentary), Matty Steinkamp wanted to tell the story of “A small town songwriter going to the big city.” This isn’t the first partnership project from the pair. Steinkamp and Decker joined forces for Play the Documentary.

In fact, it was at the premiere of that feature that the seed of this new project was planted. During the after-screening Q&A, David Moroney (of Phoenix Afrobeat Orchestra fame) asked Matty what his next project would be and if he was “going to follow an artist”.

The very next day, Matty reached out to Brandon and learned that the artist was planning on heading to New York City for a residency in support of his next album, Snake River Blues (the album). The stars aligned and Matty signed up to follow decker. through their fundraising efforts, all they way through to NYC. And Snake River Blues (the documentary) was born.

I had a chance to ask Brandon Decker of the band, decker., and silver screen star of Snake River Blues (the documentary) about what is was like to be followed around by a filmmaker through some tenuous days and about the struggle to pursue one’s passion through the heartache and long drives and subway stairs. Check out the Q&A below, but first, Snake River Blues (the trailer)…

Brandon Decker: I mean, it wasn’t the most comfortable. Often it was like business as usual. The more awkward thing is when you turn around and he’s standing there with a camera and like, “tell me how tour is going so far” and your brain just goes blank, “um, it’s cool.” That sort of stuff. I’ve been joking, Matty could ruin me with this footage I’m sure. So, I’m pleased with how gentle he was. All that said, I work and live in a tunnel vision, and indeed kind of borderline frantic pace so most of the time I was too busy in my world to think about it too much.

I know that a lot goes into an album after the recording is finished. Any chance you could lay out a timeline for Snake River Blues – the complete experience – from inception to writing the album to going in the studio to the release show in New York..?

Well, I wrote it (Snake River Blues stuff) late-2015 after the Patsy tour wrapped up and started playing it with Amber. We booked the studio time around then and started fleshing it out with the band in January. In studio early April. Had quite a few moving parts last year. Last year I remember as just tons of performing and stressing about raising money. That was all year. Hasn’t really stopped come to think about it. I’m just taking it all in stride a bit more. Anyway, the preparations were ongoing until the marathon session getting to New York. Then all hell breaks loose. I was absolutely the most run down and tired I’ve ever been in my life just to make it to the airport to go to New York City. Like, think finals in college times 25. (At age 36). That’s how it felt. New York was insane on a whole new level, predictably. It was basically 24 days of “go til you drop.” Which happened twice. It’s no surprise my body broke down in November. So that’s how it ended. I was like a person dying while trying to crawl the last few feet on Mt. Everest on that tour and my hands stopped working. My body literally shut down. That’s how the year effectively ended for Snake River Blues. And here we are, doing it again for a new album and another trip to New York and everywhere else.

There were some intense moments that played out on the screen. Is that usually “par for the course” as a working musician? Or did the launch of Snake River Blues, the album, create a special kind of havoc in your life?

See, when I see the film it doesn’t even touch how hard last year was. I look at it and think, “people (close to me) are going to wonder what I was whining about.” It doesn’t seem that bad. Albums, at least with the treatment I want to give them, both on the musical side of things and the non-musical side, require every bit of you. I don’t know how to turn it off or let shit go so well. I’m working on it but I’m crazy. Last year was way more sustainable than the Patsy year though, when we did the U.S. three times. And this year will be better as well. So, less havoc.

I have to say Amber Johnson is a new personal hero of mine. I always sorta saw her as the Shirley Temple to your Shot of Rye, but that woman is a true warrior-artist. She just tackles the challenges thrown at her with such cheerful poise (and the super cute dresses) that I think it’s easy to lose sight of the grit. After viewing Snake River Blues, I feel like I get her on a whole new level (and I always thought she was rad so it’s about to get weird). How did you two wind up in musical arrangement?

I’ve never had a tougher bandmate than Amber. Kelly was close and certainly is a strong, strong person. But she had her breaking point with this life. Amber has certainly been close but there’s no quit in her.

Amber did the bulk, probably 2/3 of that NY trip, with a severely sprained ankle. We had to carry gear on the subway and all our personal shit, basically non-stop, at all times for 4 weeks. You know how much walking you do in New York? Miles of fast-paced walking a day. Up and down Subway platforms and flights of steps and block after block. And she did that on a severely sprained ankle and never said shit.

She works as hard as anyone on the music, preparing. She runs the merch, deals with all the drunk creeps the whole night. Works basically 7 days a week and is always kind and positive and thoughtful and professional. Well, almost always. Amber’s tougher and more real deal rock n’ roll than most dudes who’ve been fired or quit this band. I met her at Main Stage when she was in another band. Saw her a few days later at a show and she had been fired from the band and I was like, “Yes!” She’s been critical musically, and non-musically, ever since.

So, I don’t want to give anything away before the premiere at FilmBar, but there is some serious fundraising stress that gives shape to the narrative of this documentary. Now that you’ve been through the ups and downs (and ups and downs) and crossed to the other side, was it worth it? Would you do it again? And, if so, would you do anything differently? That’s kind of a bundle of questions… but whatever.

Was New York worth it? The project? I mean, of course it was. The struggle is part of the fun as far as I can see. This whole thing is worth it.

It’s stupid often. And draining. And depressing. But it really is just like I say in the film – what else are you going to do? There really is no other choice. Life is a struggle in some way for everyone, even those who seemingly have it made.

The whole life thing is about growth and adapting to change and learning grace and, whatever the particular set of circumstances we do that in, that is our life. Of course, I’d do things differently. I am. But I love this mess, and frustrating as it can be, it means something. To me at least. We’re onto the next project and it’s got it’s set of challenges and it’s a wonderful life.

–
Make sure you head out to FilmBar on Thursday, May 18th, for the world premiere of Snake River Blues. More information on that event (and tickets) can be found here. 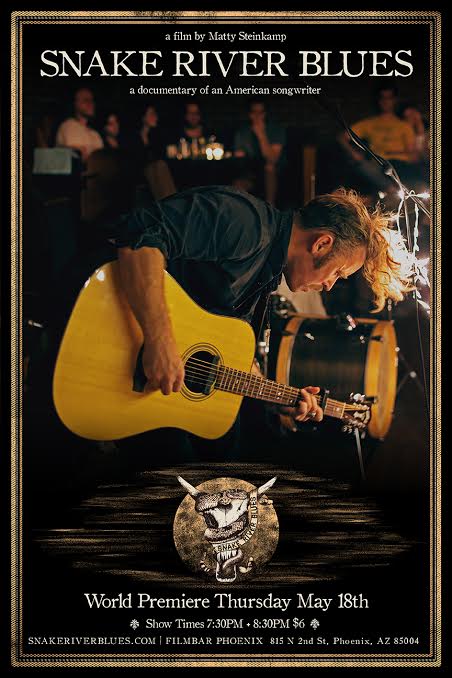