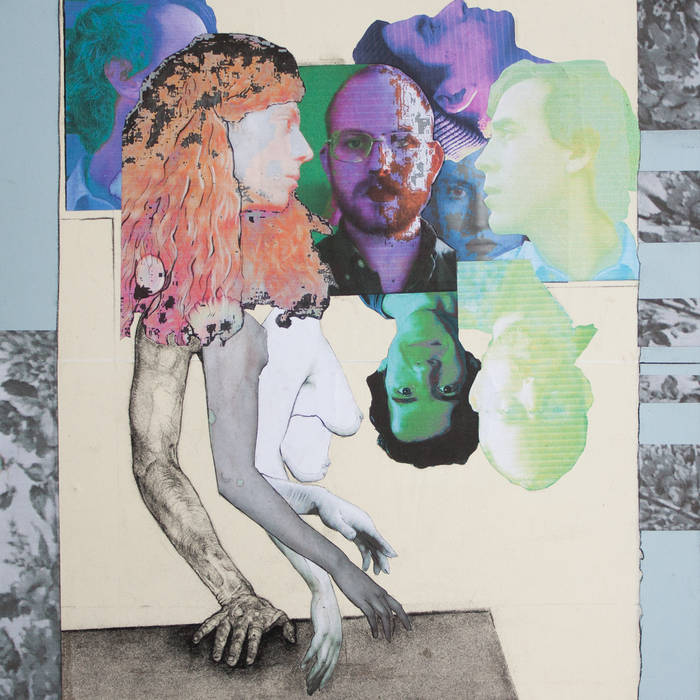 It was a sad, sad day when Phoenix had to bid farewell to Good Friends Great Enemies. Mourners gathered at The Trunk Space for one last show before the band parted ways. The celebratory event was only somewhat marred by the funereal atmosphere – like an amicable breakup or an anniversary of sobriety. There was that resolve to stick to the motto, “We’re celebrating this!,” but you just can’t ignore the sorrow sulking in the corner.

As a longtime participant in local music life, I’ve come to recognize the ongoing pattern of little deaths that happen as we move through the years. Bands come and go. Musicians move away or move on. And, as we gathered one last time with Good Friends, people lingered outside to trade remembrances of the band and, ultimately, of their time spent on the scene.

Of course, all of that stopped with Good Friends Great Enemies took to the stage. The audience remained captivated throughout the extended set, trying to stay present for as long as the moment allowed before its passing. It was a night for a community to celebrate the end of an era.

Of course, while Good Friends Great Enemies might be no more, the musicians involved have not actually, you know, died. They are alive and well and ready to pursue new havens for their talents. And, what’s more, they left behind one last collection of musical musings for fans and friends (and maybe enemies) alike.

I had a chance to chat with Evan Bisbee about the new album, , what adventures lie ahead, and the life and death of Good Friends Great Enemies.  Check out our interview below, but I also suggest you hit play to start listening to Esoterotica (assuming you aren’t at work or standing in line at the MVD)…

YabYum: One last rad album before parting ways? Was that the plan all along? Mainly, I’m just curious if you went into this album knowing that it was going to be the last.

Evan Bisbee: Glad to hear you think the album is rad, I’m hoping people are listening to it. It was not the plan to end with it, we went into the record wanting to do something special but didn’t have plans to end the band until we were well into the process.

So where are you living these days? What led to your decision to change area codes?

I’m living in downtown Phoenix these days! I will be moving to the Bay Area in a few months, however. Mostly for personal reasons (general change of scenery, spend more time with my partner who lives out there) and, with the band ending, it seemed like the right time. We decided to end the band before I made the choice to move.

I caught the band’s final show at The Trunk Space (from the merch table). There was an almost tangible sense of camaraderie in the room that evening. Do you feel that the local music community has been supportive one?

I saw most of the show from the merch table as well that night, great acoustics. The local community has been very supportive, and we were humbled by the amount of people who came out to say goodbye (great memories) and stood there for all 75 minutes of our set. I think we’ve connected with our audience over the years and I’m grateful for those who have seen us in all our various forms or for those who clocked in at certain times, and I think it’s awesome that there was a handful of people whose first Good Friends show was literally the last!

I really am heartbroken that this band has come to its conclusion. I guess we’ve been covering you for five years now. And five years, in Phoenix music terms, can be a lifetime. We watched Long Wongs come and go (again). Parliament popped up and passed. What are some of the memorable people/places/moments that will live on in your heart/mind as you venture to new locales?

Yeah, five years in Phoenix can feel like a long time. What was especially wild for me and Max [Greenwald, bass/guitar] and Bryce [Broome, percussion] was thinking about the amount of time we played together before even being officially Good Friends Great Enemies. When you factor in the Sweeps and a handful of other iterations we’ve been playing some of those songs (“Fool’s Ghost”, for instance) since 2009 basically. Big ol’ Dang.

Long Wong’s was kind of when the three of us started hitting our stride and meeting people we would end up playing with or around for the rest of our time. Prior to that I surfed Craigslist and we’d play ripoff pay-to-play shows with random shady out of town promoters or literally go to open mics and shred to a handful of dads.

If I’m not mistaken we met the Sundressed boys, Kristina Moore, All My Friends (Thin Bloods), North Dakota, Playboy Manbaby, Man-Cat, Huckleberry, Treasure Mammal, St. Ranger, Jerusafunk, Sunn Trio and many others during that period. Given, that also included shows at the Fixx and house shows (several at our place). We had already played with Dylan Pratt and Boss Frog because of our Cave Creek Connection. Beside a couple house shows we mostly have the Walkingstick Presents dudes and Robbie Pfeffer to thank for booking us!

Parliament was sort of an extension of this period and we also started getting more familiar with the Lolipop Records crew, as well as sort of see all those bands above evolve or die. We morphed to a four piece around this time, with Isaac Parker joining to play keys. I remember one show we played at Crescent called the Paper Knife Potpourri with Roar, Wolvves, and Pictures of Cake. What a weird bill!

We went on a memorable tour with Mr. Elevator to Florida during that time. We drove all the way from St. Augustine, Florida and back home to Phoenix in one go to get Max back home in time to take a final on Monday morning, and we left Florida Saturday night. Those were also the only five shows we played with a substitute drummer. We staged this thing at our kickoff so that it looked like Soup was quitting the band and then Matt Tanner magically knew the rest of the set and sat in. We played it too dry though so I’m not sure the audience really gathered that it was staged. Andy Kaufman would be proud! That’s around when we started switching up the original line up and for a minute we were playing with me on guitar, Ike on baritone, Max on bass, but we would switch around during shows too.

We went to SXSW for the second time shortly after we made this transition and looking back I feel like those were some awesome shaky confused sets. I had no idea what a guitar pedal was. It was awesome. It’s like our band was constantly going through puberty or something.

Our next evolution was to get Joseph Amos in the group. We played with him as a four piece for about a year. And, if I’m not mistaken, we played the opening night of Valley Bar with Roar and Treasure Mammal. It was cool having a horn in the mix, and Joe was more than capable at handling any leads. He really makes Cautiously Poptimistic [previous Good Friends album] shine, if you ask me. Not to mention all the hours that Corey Dillier put into mixing that bad boy. After we released that record we changed again and that’s when Zack [Parker, guitar] and Eamon [Ford, keys] joined. For one beautiful four-minute song during our Cautiously Poptimistic release show we had six people on stage to play “Similar Things”.

What’s up next for you and the other members of Good Friends Great Enemies?

Eamon will likely continue to record all your favorite bands in town at Audile Collective and shred the guitar in Pro Teens.

Zack will continue to humbly hold it down in all your other favorite bands in town, currently playing in Jfunk, Pro Teens, Roar, and Sunn Trio. He’s also got some material up his sleeve but it’s not my place to share that with you so I’ll leave it mysterious.

Max will continue to play with Sunn Trio; and he and his partner, Mariah Brown, have been playing in their own (mellow and feely and technical and awesome) project called Malta. I believe they’re recording right now so you can expect some good tunes from them at some point. He will also be working toward his masters in music therapy at ASU starting this Fall.

Bryce (Peasoup) is joining the Peace Corps and moving to Vanuatu for the next two years where he will be doing his part to make the world a better place! I’m under the impression he’s gonna miss playing drums but I wouldn’t put it past him to fasten a kit together with twine and palm husks out there in the Pacific.

My immediate future entails touring with Mr. Elevator and moving to the Bay. I’m writing new songs but I don’t really know when or in what shape they’ll be released, but you better believe I’m channeling my existential dread into music.

Isaac is living and playing in NYC, and Joe is raising his son to be the best King he can be right here in Phoenix. 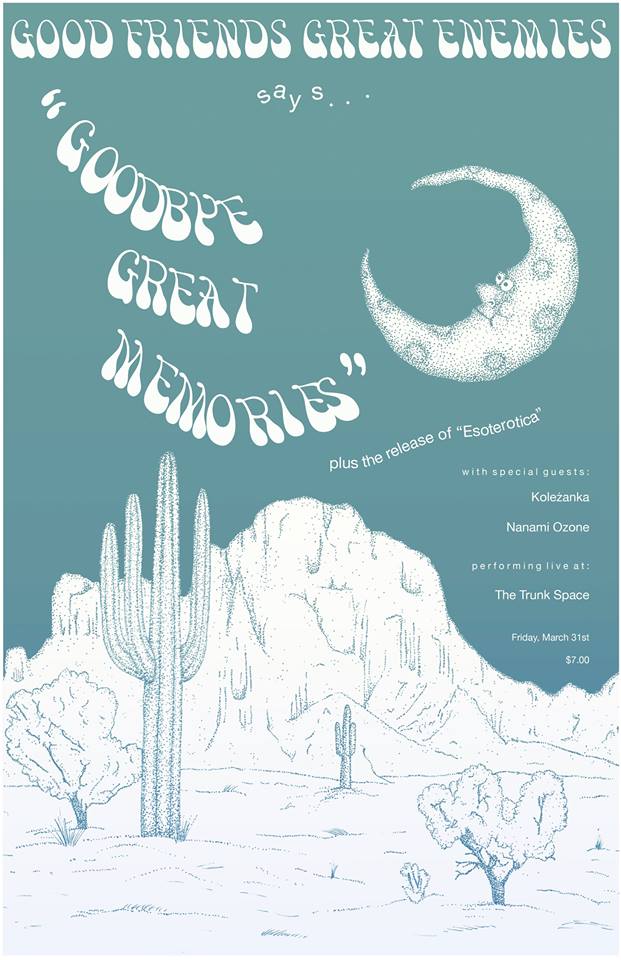