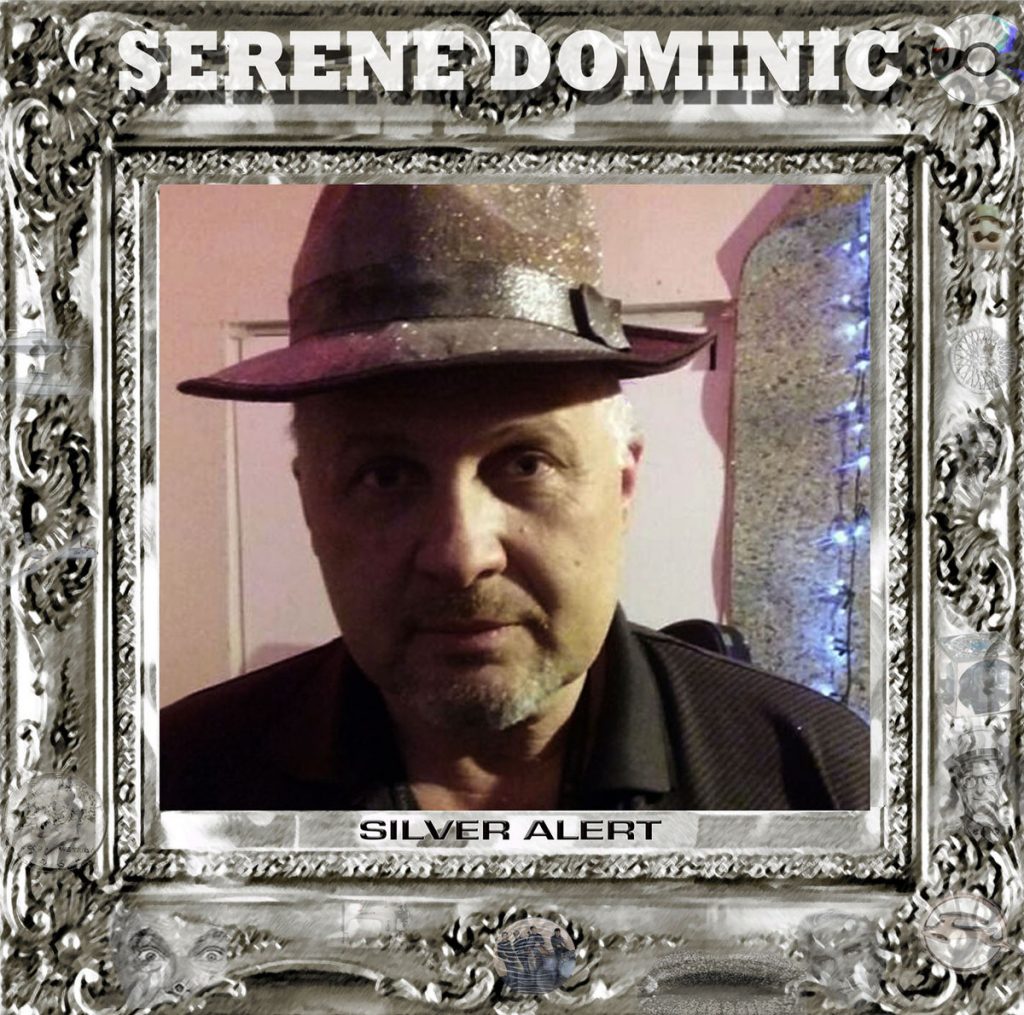 Dementia Awareness Week kicked off yesterday and, to mark the occasion, Serene Dominic released Silver Alert, his musical examination of the perils and joys of aging. Dominic dealt with the disease directly when it affected his own father. And now, as the artist moves into the realm of AARP, his work looks inward to explore what waits for all of us in that approaching Winter.

I have to say, this is a very timely topic for me this year. As my partner and I approach Middle Age (ahem), our parents are preparing to entering their Golden Years. And, at this pivotal time, there are things to be considered. Conversations to be had. For my family, the family of a coroner and mortician, we’re pretty comfortable with those little chats. How do you want to be cared for if you are no longer capable of caring for yourself? What do you want done with your remains after you die? That’s a normal Friday afternoon chat at my house.

Silver Alert takes a more personal approach to the topic of aging and delves into matters like cougar bars and vanishing record stores. The album explores a variety of different sounds as it explores its host of topics.

Of course, that’s no surprise given the breadth of Serene Dominic’s body of work. As you move through the discography, there are moments of pop, of glam, of vintage rocknroll, and just about everything else you might sample in a “History of Popular Music” course at your local university. Silver Alert provides a similar melting pot of sounds as the narrative unfolds.

I had a chance to chat with the man himself about the making of, and the inspiration behind, Silver Alert. Read my conversation with Serene Dominic below and don’t forget about the release party later this week! The album release happens on May 19th at The Rogue Bar in Scottsdale. A number of local favorites will be joining Serene Dominic’s GemSeekers including The Lonesome Wilderness, Carol Pacey & the Honeyshakers, The Bittersweet Way, and The 1140s. More information on that event can be found here.

Carly Schorman: Where did you record the album?

Serene Dominic: This was recorded at home, where I’ve recorded everything I’ve done since 2010. The Green Room is a spare bedroom in my Sunnyslope cinder block house, no sound proofing or anything and yet it sounds pretty dead which is great for drums and vocals. I always love reading about historic studios that it turns out were once former meat lockers or a movie theater like Stax. Or that Motown was once somebody’s home. I love hearing records where you can sort of hear the room. That has something to do with capturing a band performance as opposed to just writing a song as I record it with drum loops or samples, which is what I always do. So Silver Alert is half me recording with the GemSeekers and half what I usually do which is make up something with drum loops and write songs around beats. I hope it doesn’t sound like two different extremes.

And who might the “GemSeekers” be in this instance?

Since the beginning it’s been Nick Pasco who plays with The Breakup Society (who are gonna put a new album out soon on Onus Records) and Andrew Jemsek (from Drunk N Horny, Moonlight Magic, Fathers Day and a bunch of other bands). We used to have Andrew’s brother, Tristan Jemsek from Dogbreth and Diners, but he moved to Seattle. We also have Jedidiah Foster (from The Bittersweet Way) on guitar, although he was doing bass for some shows. Now we have Jim Dustan (from World Class Thugs and RPM Orchestra) on bass. If this lineup solidifies, we’ll probably do a whole album of just the band. Or maybe an EP.

Do you keep a running tally of the number of songs or albums you’ve released? Rough estimates also welcome.

I did when I was a teenager and first began writing songs and I had hundreds then. Of course, they were mostly crap but they had something that I might use later on. There’s two songs on the new album that are really pretty old, music-wise. “Go Value Yourself” was made up from bits of an older song I wrote when I was 18 and all jazzed up about Saturday night. And now it’s a pep talk for an old guy taking a job as a Walmart greeter!

I do the RPM Challenge every February, when you pledge to record an entire album of new music in 28 days every February, so I’ve built up quite a backlog. I’ve been doing that for seven years now and I’m kind of on a constant recording schedule year round. So it’s hundreds of songs. I’m in the middle of compiling a Serene D album discography /timeline and hopefully will get all of these up on the Onus Bandcamp site.

Silver Alert is proving quite the timely art piece in my personal life, but I’ll get to that in a moment. I was hoping you might share with our readers where the inspiration for this album came from?

I became preoccupied with aging because, well, I’m aging. The last two years are the first time I’ve been treated by people like I’m old, giving me the senior discount without me asking for it. I was looking for a title that reflected that.

I was originally going to call it From Here to Senility but then I kept driving around 1-17 and kept seeing Silver Alert warnings. And I was wondering where these old guys are fleeing to. Anthem? I just pictured Henry Fonda in On Golden Pond just not seeing a familiar tree and then running scared in a wrong direction for miles. I put myself in that mindset for “Pain In My Joints.” And there’s a song called “Where’s the White Shadow?” which I contributed to a Beastie Boys’ hardcore tribute album of Related Records last year. Its pretty unrecognizable from what they did. They wrote a bratty song about the TV show, “The White Shadow”, being cancelled but instead of coming from a young punk it’s coming from an old guy who’s disoriented because he can’t watch Ken Howard anymore.

I’ve seen that confusion up close and I’m scared because my father had dementia in his 80s and I saw a man who was always so meticulous all his life suddenly become permanently altered. And he watched a lot of TV towards the end which didn’t help because every newscaster or TV detective he’s mistaken for someone in his early life.

I freak out at the slightest thing that can seem like a senior moment. Like, all the sudden, I can’t remember the name of someone who was an SNL cast member. And I get defensive that, no, this is not a senior moment. I mean when I was 20, sure, I could name all the SNL cast members. I can still name those ones. But now we’ve had 40 plus years of names to forget. Fuck me if I forget the guy who played Deuce Bigelow for a couple of minutes. Who cares? I could look it up on the internet on my fucking phone. Why bother to commit anything to memory?

It seems to me like we’re much of the same mind. You don’t seem afraid to confront the notions of death and aging head on. Is that the result of your upbringing? Or the result of your years as a songwriter spent delving the reaches of your psyche for workable material?

I don’t think it has anything to do with my upbringing. I didn’t have deep philosophical conversations with my parents about death or anything like that growing up. I didn’t have anyone close to me die until I was 21. So my working knowledge of death when I was a child, the only people I always thought of as being dead were Buddy Holly, Laurel and Hardy, and JFK. And Nat King Cole because he died of cancer because he smoked.

So all my ideas about death weren’t fully formed until a lot later. Now this late in life when someone dies, it’s not as weird a thing. It’s like they just moved to The Netherlands. Recently, I found out an old friend and bandmate of mine died and I learned it through Facebook. So I wrote “Subterranean Heaven” about him. One day he was posting about some record he likes. Next day – The Netherlands!

What new project(s) do you have in the works?

[I] will probably release Dark Lullaby in the Fall and try to get [the show] put on then or the following spring. The original idea was to do it as a cast album, but I really love the way it came out as a standalone album so maybe the version I just did myself will come out as is. I mean, doing it as a live musical could take a while just to find someone who wants to do it. That’s my biggest priority. And The GemSeekers are going to be the band in the show so we’ll probably start doing a lot of those songs live too.

As a sideline, I’d like The GemSeekers to do an EP as well, so maybe we’ll just re-record some of the stuff from my previous records we do live and some Dark Lullaby stuff. Maybe do it live at Audioconfusion! I’ve been wanting to record somewhere else and I keep threatening Jalipaz that we’re gonna do it, but then I wind up demoing stuff and then I like the way it turns out. Recording yourself is a dangerous mindset. Like cutting your own hair.

Head out to the Silver Alert Release Party (and Onus Records’ Two-Year-Anniversary Celebration) at The Rogue Bar this weekend! More info here! 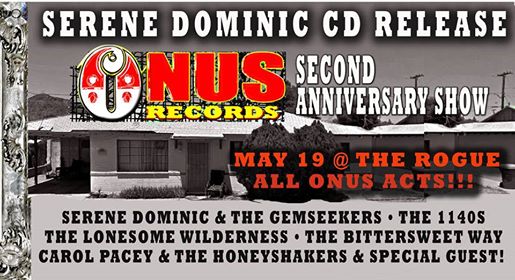