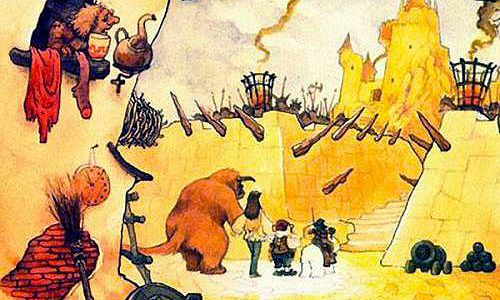 The good people who brought you the film-to-stage version of Rocky Horror Picture Show at the Firehouse and the musical adaptation of Alfred Hitchcock’s Vertigo are gearing up for what might be their most magical production to date. Yes, the team at Pan Productions has been locked away for months hard at work on The Goblin King’s City; a stage adaptation of the 1986 cult classic, Labyrinth.

What I like most about the rambunctious upstarts of Pan Productions is that these folks go BIG and they go BOLD. For this new musical, they count nearly a hundred musicians, actors, and artists amongst their ranks. And, they even went so far as to add two new songs to the famed soundtrack. 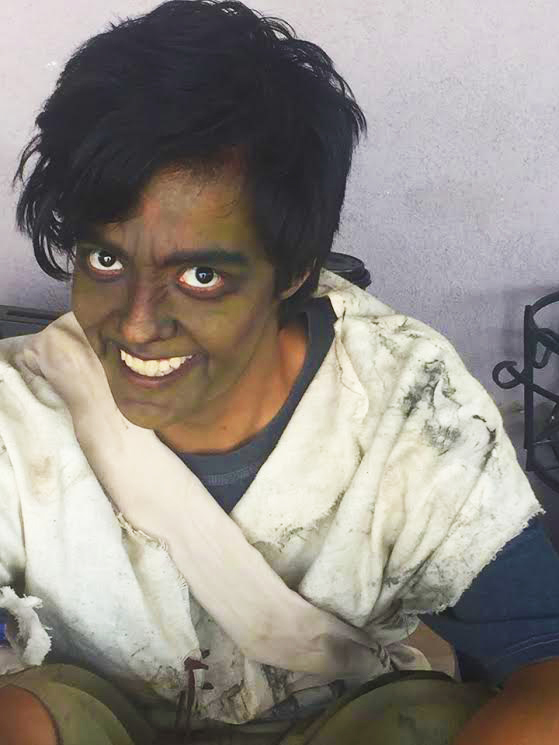 All photos courtesy of Ting Ting and Pan Productions

And, once again, local musicians join the cast and crew to help bring The Goblin King’s City to life with the multimedia flair that would make David Bowie proud.

One new song was penned by Serene Dominic, who also wrote the musical (and previous Pan Productions’ Production) Swimming in the Head, and the other addition was written by I Am Hologram (to be performed by We Are Hologram). Another favorite from the local music scene, Jerusafunk, will be providing the live musical accompaniment for the show.

Now, I know what you’re all wondering… Who is going to play Jareth, the Goblin King? Well, if it were up to me, you’d have to head out to the show to find out, but Sheri Amourr (executive director & producer for the show) revealed the details in our Q&A below. 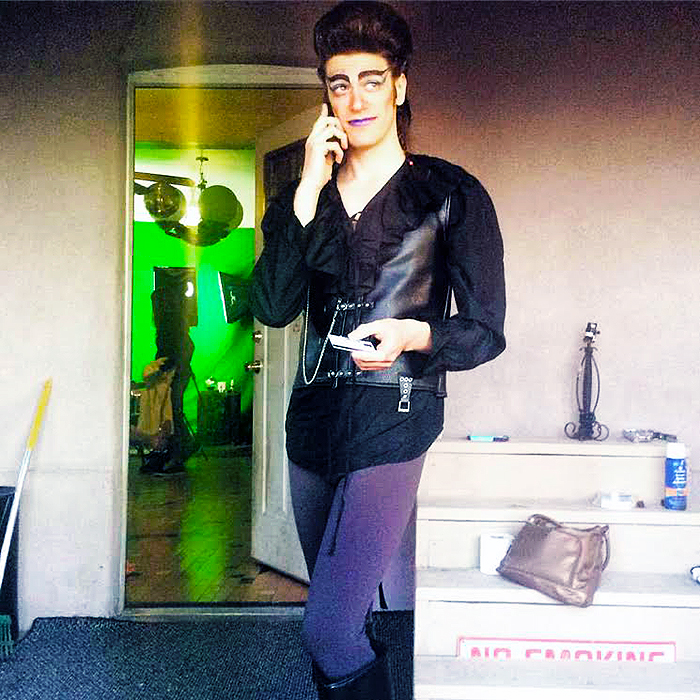 YabYum: First of all, should we credit a writer for the adaption? Or was this a group endeavor?

Sheri Amourr: The adaptation of the script was quite the team effort. About 7 people were involved, which included our directing team, plus a few others we’ve previously worked with.

I believe this is your third adaptation of a film for a stage production, correct? Last year, you brought a musical version of Vertigo to life. And, before that, you did an adaptation of the film version of Rocky Horror Picture Show. What did you learn from previous productions that has benefited you this time around?

The greatest thing we learned from our previous theater stage productions, is that musicals are quite challenging and time consuming. We seemed to never have enough time to do what we felt needed to be done. We also learned that working with a new and mostly original script, and with new and completely original songs is MUCH more difficult than just adapting your own version of something that’s previously been done.

Swimming in the Head, while based on the movie Vertigo, was written by Serene Dominic. All of the songs, and much of the script, were his original creation. We learned very quickly that despite the simpler set design and scenes, it was far more challenging to pull off than Rocky. In the end, we were very pleased with both, but we knew of a few things that we’d expect, and in some cases do differently, in the future. 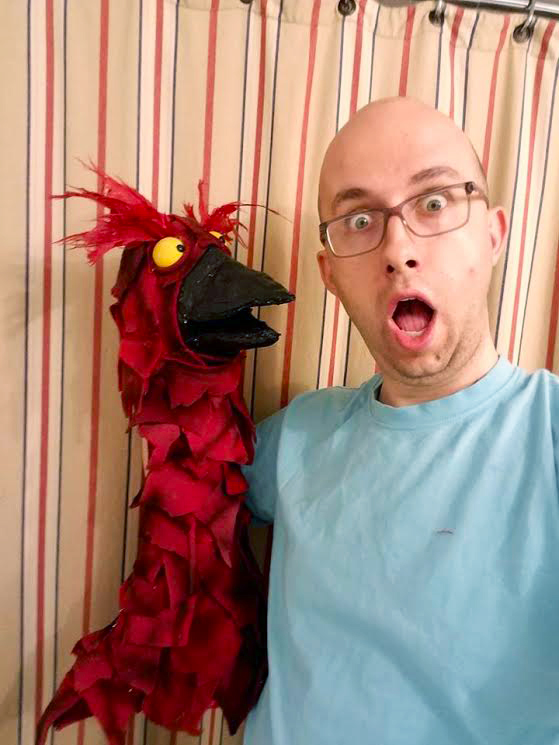 There were some local music All-Stars in the previous casts and we expect to see some returning performers in The Goblin King’s City. Any chance you’re willing to name drop some of the folks we’ll see in this new production?

We will be working with local music artist Joobs once again, as he will be playing the role of Jareth, The Goblin King. We are also working with Chris Del Favero of Jerusafunk as Jareth, and will be alternating our lead roles for the different show dates. Marcella Grassa from Rocky Horror, and Swimming in the Head is working on choreography with us, and Uche Ujania will be playing a surprise role.

I also noticed that some newcomers will be joining Pan Productions’ cast for this new undertaking. What new faces should the audience watch out for?

We have many newcomers, including Kendra Ruth Martinez as the role of Sarah. Alexandra Morfin will play Sir Didymus, and we have Will Jones as Ludo. Jesse Abrahams from First Friday Night Live will play Hoggle.

Some local musicians wrote original pieces for this stage production. Care to fill us in on who wrote songs for the play?

We will feature two original songs written and performed by We Are Hologram, the first full band ensemble by I Am Hologram. We will also feature an original song written by Serene Dominic. 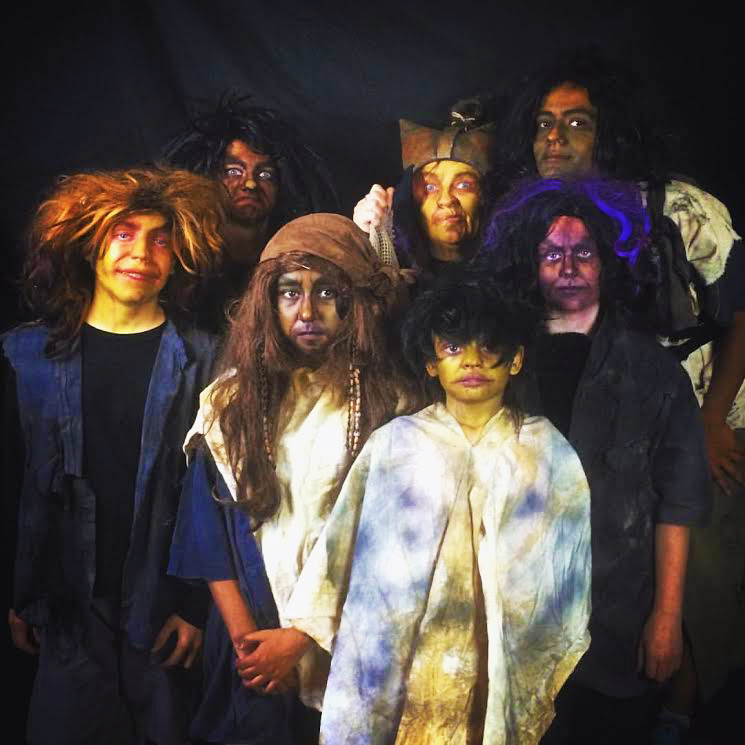 Pan Productions seems to create events that are more than mere plays. There’s a celebratory atmosphere that pervades the productions. This year’s event looks like it will be no different. Food vendors? Live bands? What else can people expect when they head to The Goblin King’s City?

We are in the process of securing our food vendors, and there will be entertainment before and after the show, and during intermission. We will also have art vendors, as well as a meet and greet with cast members after the show. Jerusafunk will be the “pit band” to play the songs we will feature from Labyrinth, as well as the original song written by Serene Dominic, and numerous other musical interludes.

The Goblin King’s City opens on Friday, May 26 at The Pressroom, with additional showings scheduled for Saturday May 27 at The Outer Space, and Saturdays June 3 and 9 at Unexpected Gallery. For more information, check out the event page on the Pan Productions website. 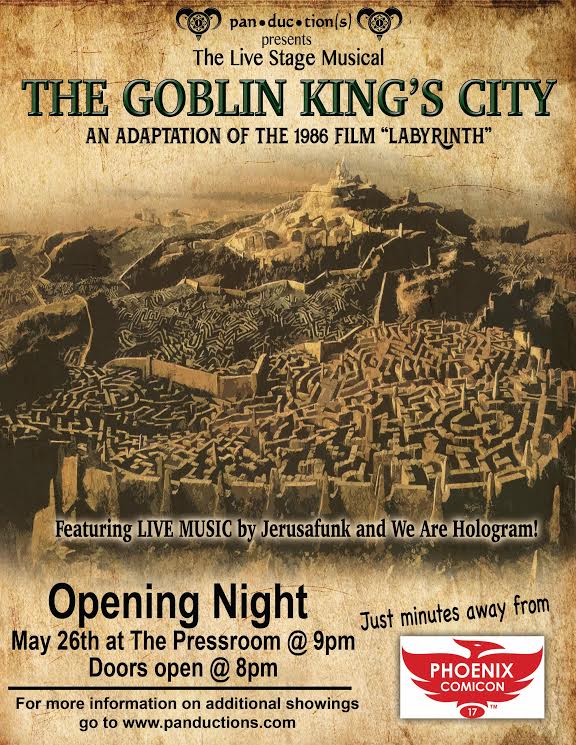