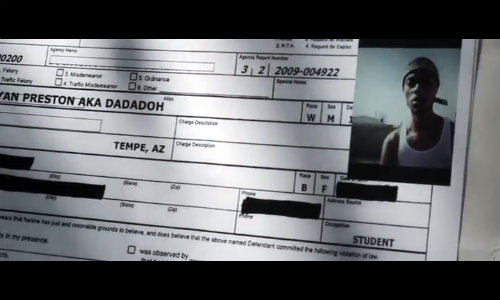 We’re super stoked to be the first to share this sweet new music video from local hip hop legend Dadadoh. We even got a chance to chat with the man behind the music (and music video) about all the shizz coming from his camp this year.

But, first, we want to give you inside eye on the music video for “Lonesome”. The track itself feels more atmospheric than your usual hip hop jam and that’s part of the reason we dig it. “Lonesome” is where Dadadoh gets into one of his more meditative moods and that musing quality echoes the emotional implications of the track’s title.

Check out the music video and the continue on below to read our Q&A with Dadadoh about the making of “Lonesome”, the fact behind the fiction, and what’s next for PHX’s favorite musical hustler. Oh, btw, make sure you have Radicalhere – the album from whence this track came – in your own personal collection (available ).

YabYum: So, first of all, I’d like to know more about the making of the video. Who directed it? And did you have additional help from any key players to bring the new video to life?

The ideas behind my videos are so specific that I really couldn’t imagine anyone else directing them other than myself. My ideas are never set in stone. They’re really just rough blueprints of what-ifs that I’m always expecting to evolve into something else later down the line.

I’m over performance shots in hip hop videos. I mean how many ways can you shoot a video looking into a camera and mouthing the lyrics. The concept has been beat to death in my opinion so when it came to making my next video I wanted something that was more of a film than a commercial for my song.

Andy Warpigs had just released his video for “Everybody Likes You Now” and I loved the feel of that video. I found out it was shot by this really cool cat named Indy Prince. I reached out to them and tried to explain this crazy idea I had and, fortunately, for me they were totally down to help me make it happen.

It looks like the new music video might be continuing the tale that we first got a glimpse of in your last music video. So, I have to ask, is this narrative entirely fictional?

This video is definitely another chapter in the same universe as my last video. Hip Hop has so many unspoken rules and I’ve always felt that those limitations have hindered the art form at times. I try to play with those sensitive areas in my visuals. I can’t really confirm at this time what’s real and what isn’t but I can assure you that the truth will come out in the end of the narrative.

The single featured in this video came from your last album, Radical. Where did you record the songs for that collection?

I’ve been producing music for myself and other TVLiFE Entertainment artists at my home studio that I’ve coined “Jamarvin’s Room” in Tempe, AZ since 2012. The entire thing took thirteen months before it got wrapped in cellophane and I finally had the release party on my birthday last year.

You perform as Dadadoh but you’re also involved in other musical projects. Mind enlightening all who might not have the full Dadadoh-music-hustle picture just what you’re up to these days?

I wrote and recorded a song for the evangelistic rap group 20 Ft. Neon Jesus awhile back that should be on their next album. I just shot a concert film for Red Tank! that I’m really excited for the people to see. We’re in pre-production on the next two MC/DC projects. I engineered and played percussion on Andy Warpigs next two albums. I’m working on an EP with Indy Prince (who you can hear wailing like an old black lady on Andy’s “Dog Ate My Dope” single).

Ricky Smash and I just spent two months recording and releasing a new project called They Don’t Think It Be Like It Is But It Do by our band Exxxtra Crispy that I’m really excited about. I also DJ for this super cool femcee called Bert who’s ill! I put on a women’s event four times a year called Women Only that gives new female artists a platform to perform and connect. I started a podcast called “Before The Show” that is currently recording its third season and that will be released soon.

What’s next on your itinerary? You’ve already been in a feature film, directed your own music video, and put out some killer music. I want to know what else Dadadoh has on his bucket list?

I’ve been working on my stand up movie for awhile now and I think it’ll be done by the end of the year. I’m also working on booking a summer tour for 2018 where I want to get overseas and I plan to release my next album right before that tour.

I’m playing with the idea of re-recording some songs I’ve already released as a full band where I play all the instruments as well.

I’m mixing a cover I recorded that I’ll send to the When In AZ Vol. 2 compilation when it’s done.

We start production on the next Exxxtra Crispy album next week and I’m hyped on where we’re going to take that sound next.

I’m looking for more radio, television and movie placements in my future too. Hell, if I haven’t done it and it seems borderline impossible, then consider me all in.