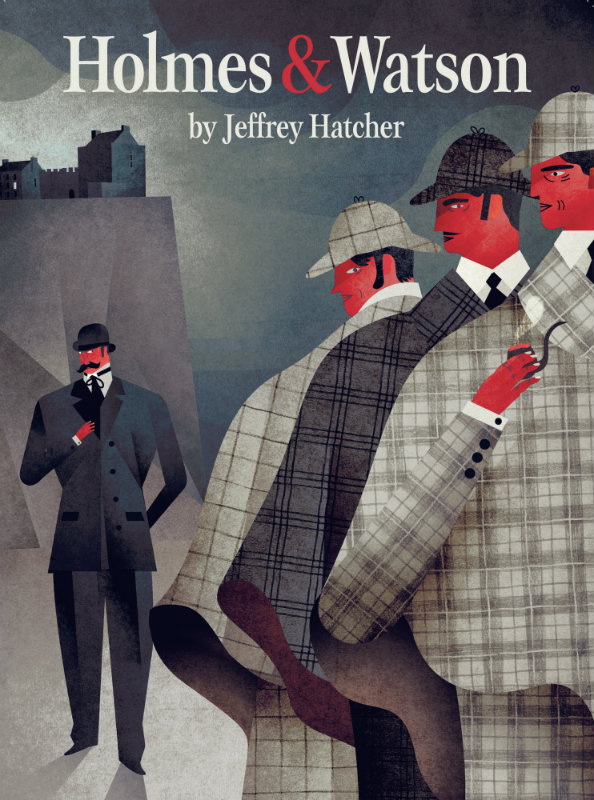 The Arizona Theatre Company (ATC) has no problem getting involved with a Sherlock Holmes mystery. They’ve more than proven their affinity for Sir Arthur Conan Doyle’s fictional private detective. In recent years, they have entertained audiences with shows like Sherlock Holmes and the Adventure of the Suicide Club. Jeffrey Hatcher, the playwright behind that show, and other ATC hits like Dr. Jekyll and Mr. Hyde, also penned Holmes & Watson, ATC’s current production that runs through May 28 at the Herberger Theater Center.

In Hatcher’s current adaptation, famed detective Sherlock Holmes is supposedly no longer among the living, having met his fatal end at the scenic Reichenbach Falls in Switzerland – the type of death that makes finding the body a pretty complicated affair. So, who better than Holmes’ righthand man and biographer, Dr. Watson to investigate the many claimants around the world purporting to be deceased detective? Watson receives a newspaper clipping that a remote mental asylum has admitted three men who match Holmes’ physical characteristics, and his curiosity is piqued. This lead seems more plausible than others, as one of the men was quoted saying something only Holmes would know. Watson sets sail on the journey to this distant loony bin to uncover the truth.

Upon his arrival, Watson gets familiar with the asylum staff and then gets an introduction to the three men who respectively claim to be Holmes. As three years have passed since Holmes’ reported death, it’s not so far-fetched that Watson might have a little trouble immediately picking a winner from the candidates. As the story unfolds, he continues his interrogation of the men, determined to provide the answer that gives purpose to the entire story.

Though Holmes and Watson is a mystery that takes place in a dreary, clang-y mental hospital, it’s not a show that lives on the dark side. One of the play’s layers is a pervasive, cheeky sensibility that cuts through the suspense without minimizing the importance of the impending aha moment.

A few factors contribute to the show’s success, talent being one. The cast members all boast some pretty hefty resumes and training. More than a few have appeared in previous ATC productions, including Sherlock Holmes-focused plays. Their collective comfortability keeps the show flowing smoothly; something that’s especially necessary when the setting is so minimal. Being that the dialogue is the primary focal point of the show, ATC was also thoughtful in making the event not much more than a 90-minute affair. It doesn’t leave you squirming in your seat thinking, “The real mystery is when is this going to end?!”

Enigmatic tales featuring this detective and his trusted companion are inherently more intriguing because of the duo’s eccentricities. Holmes and Watson does as good of a job celebrating their magnetic quirks as it does providing a perplexing puzzle to solve.

You still have a chance to catch Holmes and Watson from the Arizona Theatre Company through March 28th!