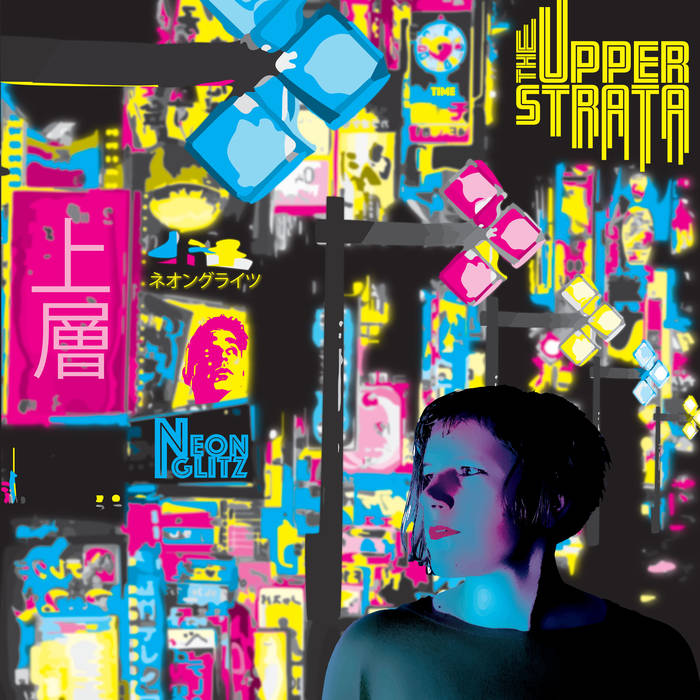 Performing duo (and recent Arizona residents) The Upper Strata has undergone many style and identity changes over the past several years, both as performers and in their offstage lives. But while their tone and perspective has changed, their sound is still as original, profound, and enjoyable as ever. Their newest album, Neon Glitz, is a perfect example.

Like other recent The Upper Strata releases, Johnny Sanchez and Regula Sanchez-Schmid have branched out from the duo’s rootsy, Americana-folk origin, instead giving Neon Glitz a versatile style all its own.

“I don’t tend to turn influences or inspiration off,” said Jonathan Sanchez. “If a sound or lyrics pop into my head, I simply record them and use them, and am grateful to have them. I don’t usually say, ‘Oh, no; I can’t do a blues song or a dance song.’ If that’s what seems to be developing, I let it happen.”

The variety in tone on The Upper Strata’s new album, as well as its imagery and subject matter, is inspired largely by their new home in the Pacific Northwest. Jonathan and Regula have recently relocated from their former home in Phoenix to Portland, Oregon, and shortly after began writing songs for this album while exploring their new environment.

The move away from Phoenix has proven a significant, sometimes intimidating change, but some of that same tone and spirit is now reflected in the tracks of Neon Glitz, so the duo seems to be putting that emotion to good use as inspiration.

“Music with risk and danger is always more real and exciting to me,” Sanchez said. “Neon Glitz is talking about that connection to sneaking out as a teen to go experience live music, or getting into dance clubs to get sweaty and lost in the music.”

Experiencing the music, and getting lost in the message, is one of The Upper Strata’s areas of expertise. Neon Glitz, like other Upper Strata albums before it, does not fit into one specific musical genre or style, but touches on many along the way. The album uses each one to help weave together the experience – the overall message – Neon Glitz works to convey… both caution and celebration, addressing both how short and fragile – yet also how beautiful – human life truly is.

True to Sanchez’s love for music with risk and danger, Neon Glitz tackles a staggering number of philosophical issues – as well as human doubts and fears – and brings them to the lyrical forefront. In the first track of the album, “Time,” the lyrics of the song address what the group calls the biggest theme any human can ever comprehend: our limited time on this planet. And while the gravity of the subject matter refuses to let up along the way, the album adds in a variety of those many genres and music styles, helping them paint new strokes of the same picture, but in new ways.

Moving on from the Middle-Eastern flavor and big dance beat of “Time,” the pair of songs that follow serve as two parts of the same message. “Garden Wall” contains dub elements, mixed in with accordion and mystical lyrics, followed by the club-sound induced “Beyond,” which serves as part two of the imagery the pair of songs works to convey.

“Thematically, the image of the garden in art and literature is both a fertile womb and a place of security,” Sanchez said of the two songs. “The most common symbol of this is the Garden of Eden. By stating that we need to go beyond the garden wall, the songs suggest it is inherently human to choose our own destiny and leave paradise, or the womb.”

The title track of Neon Glitz is dedicated to the artistry and life of David Bowie. The song has elements inspired by Bowie’s music, yet the song is its own creature. The song’s lyrics, including the lines, “ Going down, wrong side of town, where the sound is king, and we bow in the presence of the thing,” note both Bowie himself, as well as the original draw that music had on Sanchez, personally.

“I have always been attracted to music from the wrong side of the tracks – from gritty punk to raw blues in some sketchy juke joint, or reggae down at the port of Tampa in some illegal club,” he said. He said that idea, that pull toward the wrong side of town to hear and see underground music is central to the album, as well as the song.

The next two songs, “Sweet Distraction” and “Willow” are new-wave inspired dance tracks. The lyrics of “Sweet Distraction” address the way love can shelter you from the harsh and cruel aspects of life. “Willow,” however, is about the opposite – the way sometimes you can love someone, and never get that love back.

“Lighthouse” has a different feel – a style Sanchez calls cinematic and bluesy. The song observes how a partner in a relationship can provide shelter… or actually be the storm: “You and I form a bittersweet island, surrounded by a sea of orphan tears; we huddle against our deep, dark fears… Sometimes I’m your lighthouse, sometimes I’m the raging sea.”

Sanchez said the final track from Neon Glitz plays like a Motown and R&B jam. “Line” is ultimately about realizing what solace and support you give and receive in a relationship.

“Frankly, it was a rough year,” Sanchez said. “Several of the songs, including ‘Line,’ are about finding peace, optimism, and strength in bleak situations.”

As a husband and wife creative team, Sanchez noted the music of Neon Glitz forms a journal of the relationship. On this album, Johnny is often singing something pessimistic, while Regula is singing a positive answer. This motif helps symbolize the way partners support each other in life, both physically and emotionally – and, in the case of The Upper Strata, also creatively.

And, as Sanchez referenced, that mutual support has truly led Johnny and Regula through both good times and struggles, particularly in the last year. Sanchez said the album is being released later than planned, as Regula recently suffered a brain aneurysm while visiting abroad, requiring brain surgery.

“She is an amazing lady – as any husband should say of his wife,” Sanchez said of Regula. “But to survive an aneurysm and come back to making music is miraculous, really.”

Sanchez said his wife still has some difficulties, and it has influenced their music, as referenced in “Sweet Distraction” with the line, “Too many hospitals, too little healing,” which Sanchez said they had endured, for sure.

“’Time,’ and the two-part songs ‘Garden Wall’ and ‘Beyond’ are about being bound to this world by our limited mortal shells, and learning to go beyond them,” he said. “All of the medical nightmares we went through last year definitely made that longing more intense – especially when you feel it is your soul mate that might not have long to live, or might not survive all of the procedures and tests to keep her in this world.”

For a journal telling the story of a relationship, The Upper Strata’s newest album, Neon Glitz is profoundly developed. It tackles not only styles and genres rarely blended together (let alone, so fluently), but also addresses in its lyrics issues and concepts many are afraid to even consider.

But here – in this contemplative, exploratory space – is where husband and wife team Johnny Sanchez and Regula Sanchez-Schmid truly shine in their music as The Upper Strata. With new styles, new uses of vocal synthesizers and instrumental layering, and deeper lyrics and messages to discover inside each track, Neon Glitz is truly an album with a style all its own – promising something new with each listen.

Digitally released May 5, the limited edition vinyl of Neon Glitz will be released July 7, 2017 and is pressed by Cascade Record Pressing in Portland, OR. For more info check out The Upper Strata on Instagram, Twitter, and Facebook.