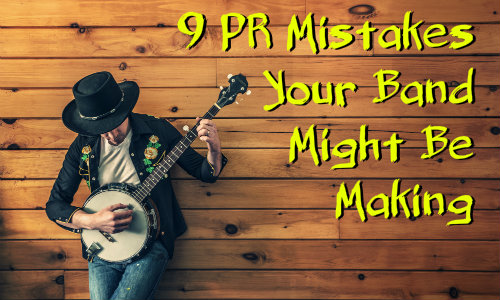 Building a solid Public Relations [PR] platform for your band or brand can be tricky. You might be stepping on toes without even realizing they were ever underfoot, but there are easy things to avoid in this age of self-promotion that can help you expand your brand (or band) without pissing people off…

Okay, I know it might feel a little corny, but you really should do the band photo shoot. Even if you’ve never had a press inquiry and you’re just starting to gig around town, a few tasteful and professional-looking photographs can help you through those early stages of being a band. They’ll help you look more pro when show promoters or venues check up on your band’s online presence, but they can also help to land you press.

And, don’t forget that this is a time for Music Bloggers so don’t expect them to fly in a photographer to your next gig to snap a picture. If you want coverage, you might need to provide an image.

Hiring a professional photographer is really the best way to go and there’s a host of local talent available for a reasonable price, but you can try to a wrangle a friend in a pinch. You may do some Instagram research to see which of your friends has the best visual sense and plead your case.

So it is the age of shameless self-promotion but you want to be careful that you’re not over-saturating the market. A few interactions through your preferred platforms is totally appropriate, smart even, but there is a dark path that ends in a cycle of constant posts until you’ve been blocked from the visual stream of your fans to the point of online obscurity.

Maybe don’t have all your Instagram photos immediately repost to Twitter AND Facebook AND then on your band’s website so that an email goes out to your whole list announcing, “Hey, we added a new photo!” Just a suggestion. Or maybe cap the number of direct posts through your band’s Facebook page to a few announcements a day.

No one’s trying to limit your personal social media time but maybe don’t swamp your friends with constant requests on behalf of your band. Sure, it’s good to put yourself out there if you want your art out there. We all get it. But maybe take a moment to consider how much a little fine-tuning that social media attention might do by reducing some of the fodder.

Of course, the converse to over-saturating the online world with all things Your Band is not engaging through social media at all. Just as you’re trying to grow your fan base, media outlets (like blogs and radio stations and so on) are trying to do the same. If they offer you a little time and attention, it’s considered polite to share the love. Like, Comment, Share, Re-Post, whatever. It’s a way of showing the writer/DJ that you appreciate them tossing a little support your way.

And, if we follow this line of reasoning, this also means that your band has some sort online outlet for connecting with their fans be it through Facebook, Twitter, G+, Instagram, Tumblr, or the myriad of additional offerings the internet has to offer.

We have noticed a trend among some bands to skip the whole Social Media / Internet thing entirely. Oftentimes, these bands have label support or representatives who send out appropriate support on the band’s behalf, but sometimes it’s a smaller band who just doesn’t want to buy into the self-promotion.

That’s cool, yo. I’d just not expect the people of that mind to be delving into an article called “9 PR Mistakes Your Band Might Be Making”.

Okay, maybe you’re going for an early Dylan thing. Or maybe you really do resent the people who put their time and effort into writing about music because the act is, in and of itself, an absurdity. Or maybe you just think it’s super cool to act super disinterested in absolutely every thing. Whatever. You do you.

But this is a time in music history of total and complete inundation. Now everyone with a computer and a microphone is a recording artist. A few quick minutes on the internet and that person can find a plethora of places to send their recordings. Some of them suck, but some don’t. And when you run the numbers on that you end up with critics swimming in a sea of music.

Until you get to that superstar status that simply “can’t be ignored” critics might just ignore you if you rush out the gate with a too-cool-for-school attitude. Sometimes cheeky can be amusing, but you don’t want to come off as all bluster and bravado. Your track might get the delete before the chorus because there are forty other singles waiting in line.

So think twice before hitting the send button on an angry email or posting a Twitter rant because writers hold grudges. We’ve seen it in chat groups for music journalists. Any angry tweet about a bad review gets passed around from writer to writer until you’re “that guy” and I don’t mean to get gender-specific, but come on, dudes, it’s like always dudes.

In that same vein of don’t piss of the press, I suggest you learn to handle your scandal before you decide to sit at the helm of your band’s social system interface. Maybe pick the calmest, least-likely-to-embark-on-drunken-tirade member of the band to manage the day to day posts on your social media accounts. Most bands (but certainly not all) should just probably pick the bassist.

Maybe you had a really bad turn out at a gig or maybe the other band “accidentally” jacked your drink tickets or maybe your lead singer slept with, well, everyone. Or maybe you just had a real shit day. Who knows? More importantly, who should know?

Those are important questions before taking to the interwebs where the Department of Hurt Feelings is always open for business and will to listen to your lamentations. Before you launch into your next internet tirade or publicly indulge a woe-is-me moment, ask yourself: How would you feel if everyone you ever knew or will ever know might have access to this very personal moment in you life? Because that’s how the internet works, kids.

A really fast way to piss off the press is to not have a decent response time when contacted, but waiting too long to replies to inquiries is just generally a bad idea if you’re trying to push your band to the next level.

Now, in all fairness, you should be clear about how you would like to be contacted. Maybe your Facebook page or band website or your Bandcamp page includes a little snippet that says, “For press and all other inquiries, contact My Band Here,” and then include an email.

And, here’s the important part, make sure someone checks for inquiries every few days if not every day. Ideally, one member of the band (at least) should have an alert on their phone when a new email pops into the band account. It might be a booking request or a press inquiry or an Argentinian financier whose life was changed by your song “Change” who now wants to bankroll your next album. You never know.

(7) Not Seeing a Difference Between “Persistent” and “Annoying”

Just as you don’t want to over-inundate your fans with a barrage of social media updates, it’s a wise idea to learn to draw a line between persistent and annoying when dealing in band emails.

Sure, you’ve got a tour to book so you need to hear back about that August show date or you sent out that track to a blog two weeks ago and they haven’t acknowledged that they received it. Reach out. Touch base. Politely inquire if the party in question had a chance to review your request or material, but repeatedly prodding in hopes of being that stubborn bastard that the press covers just to get off their backs is not the right approach.

Two follow-ups on an initial email seems appropriate in most cases. If you don’t hear back, move on. There are lots of other opportunities waiting out there. Don’t waste your time mulling over the one blog or label or radio station that doesn’t give you the attention you warrant.

Okay, so maybe an Argentinian financier is not lurking around every corner to foot the band’s bill, but there are lost of opportunities for independent artists in the world today. You have to keep yourself open to the possibilities.

Maybe you think that you’re happy just gigging around town and opening for a few notable names that might pass through. That’s cool. Maybe you don’t need to knock yourself out emailing every label and publication from here to Dubai. But it’s still not a bad idea to put a little effort into the back end of the band life to see that you aren’t always playing to that same sparse room of friends at every single show.

Maybe you don’t want to tour the world and throw chairs out of hotel windows (do people even do that anymore?), but if you’re in a band that actually plays outside of your living room/basement/garage, I assume you want people to hear you. A little PR effort can go a long well at helping you establish and maintain connections to fans, new and old.

This one isn’t about social media or press relations; it’s about personal relations. A lot of your fan base is going to be cultivated through your live performances (and your personal interactions at these events) so try not to be an asshole.

I always remember that one guy in a band who started getting drunk before shows and calling his band-mates the “supporting cast”. That didn’t go over well. Or that one drummer that tried to fight the bouncer in the parking lot after the show.

Think about it, the music scene is made up of relative strangers who hang out together in a special set of circumstances and no one really wants to talk about their day jobs. What’s left? Politics? Ugh. It’s no wonder musicians and artists are all a bunch of gossip-mongers.

It only takes a couple choice moments to forever scar your public image so try to be cool. And, if you do find yourself in a social snafu, the best option is to take responsibility for your faux pas. We live in a time of social sensitivity. You might not have intended offense, but being respectful means acknowledging past errors as errors.

You vomit on a bouncer, you apologize the next day… profusely… with cookies and promises of redeemed behavior.