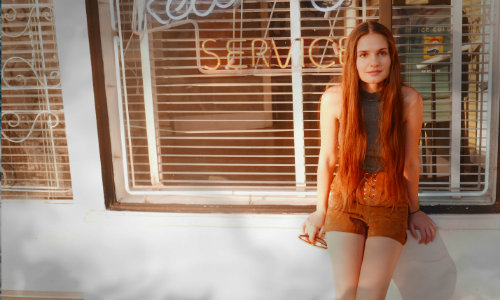 The SunPunchers released two singles in prelude to their new EP which comes out THIS WEEKEND. These songs have a sticky summer warmth, like laying on a screened-in porch on a day buzzing with mosquitoes. There is an aesthetic here of sun tea and swimming holes brought to life through stunning, and stunningly demure, musicianship. The release show goes down at The Newton on May 20. Once you hear “Screwtop Head” from The SunPunchers, I can’t imagine that there’s anywhere else you’ll want to be this coming Sunday. More info on that event can be found here.

Wait until you hear the ethereal voice of 21-year-old Italian singer/songwriter Violetta Zironi. It’s not just her voice that enchants listeners of “Half Moon Lane” but the charming narrative of her songwriting style.  The single has a stripped-down sound reminiscent of those swan-throated folk musicians of the 1970s like Vashti Bunyan. Just part my hair down the middle and wrap me in an afghan and I could listen to “Half Moon Lane” from Violetta Zironi all afternoon. I certainly hope to hear more from this artist soon.

“Saint Margaret” kicks off with just a minimal guitar line and the soulful voice of Tuelo Minah. That’s actually all you need. But, as the underlying instrumentation picks up, Tuelo continues to drive the single with those powerful pipes of hers. The song pays tribute to Minah’s mother in a way that I find both empowering and tinged with a certain sorrow that I feel many women hold for the experiences of our mothers. “Saint Margaret” by Tuelo is emotionally moving and sonically compelling so I suggest you check the single below…

“Maria, Promise Me the Next Life”

There are some really interesting things happening in the subtle sound permutations on “Maria, Promise Me the Next Life”; the new single from NYC-based singer, songwriter, and producer Luca Chesney. This alt-electro track is a disembodied but emotionally textured journey. “Maria, Promise Me the Next Life” is the first single from Chesney’s s/t debut EP. I’m hoping to get my hands on that release sometime soon. In the meantime, enjoy this new single from Luca Chesney.

This isn’t the first time we’ve featured the music of Madeleine Dopico in our publication and I’m starting to think that we’re going to build a lasting relationship. The promising young songwriter crafts emotionally powerful soundscapes that she meets head on with her robust voice. On “Me to Bleed”, Dopico creates a haunting atmosphere for her brooding lyrics and manages to throw in just the right amount of dramatic flair to keep things interesting. That’s a combo a mortician’s daughter like myself can get behind in her pop music.

Bradford Loomis (of The Banner Days) dropped his first solo album since 2013 in March. Bravery and the Bell features this gem of a single, “Drive You Home”. Loomis penned the album after learning that his father was diagnosed with Early Onset Alzheimer’s. The soulful sound of Bradford Loomis’ folk style comes through with an earthy Americana that feels like it could easily find a home in Nashville, but the artist calls Washington (state… not that other one) home. Check out “Drive You Home” from Bradford Loomis here…

The Los Angeles songwriter who pens somber ditties under the name Arpeggi released her debut album, Senioritis, around this time last year. On that album, you’ll find “Songs Don’t Help” which delves into those Bell Jar moments when nothing seems to push back the skulking clouds of depression – not friends, not love, not even music (gasp). If you like your indie music stripped down and brooding, I suggest checking out “Songs Don’t Help” from Arpeggi. Or head here for the complete album.