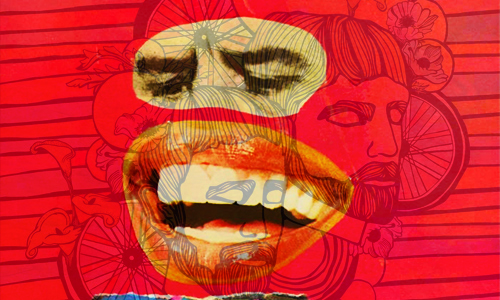 Exxxtra Crispy might be a new band on the Tempe scene, but this rowdy bunch is comprised of some pretty prominent players. The band just dropped their debut album, They Don’t Think It Be Like It Is But It Do, on 4/20 which includes this sweet single. “Scumbag” kicks off with Latarian Milton talking up that hoodrat life before some “totally danceable minimalist-pop-power-funk/punk” takes over. This single is a superb example of that Exxxtra Crispy sound: smart sample selection, horns, and some seriously riotous punk vocals all smushed together. This band might just be for you if your idea of summer fun includes late nights, loud music, recreational drugs, and, well, you get it…. Smash that play button below and don’t forget to delve into the full Exxtra Crispy experience here.

Moonweather might only count three official members amongst their ranks, but for the making of the new album, they called upon friends near and far until the list of participating artists and musicians became a bit too long to print. The band describes their sound as “kind of like Sufjan Stevens and Modest Mouse had a child they’re both disappointed in,” but I think moonweather harkens back to even earlier indie. “Drying Out” has a bit of a Pavement feel to me, particularly during the early part of the song. The single has a bit of a listless feel – you know, that lazy hazy feeling that you get on a sticky summer afternoon when you have nothing to do bit listen to records and stare at the ceiling fan. That is this song.

If you missed Call Me Karizma when they passed through Tempe back in March, you missed out but you can correct that with a little at-home listening. Call Me Karizma opts for a more pharmaceutical application of the term “Zombie” on their chill new single. This “emo-pop” number has a slouchy feel but the production is tight. That just might be the modern mode of psychedelia for the pill-poppin’ generation. Danceable and sometimes depressing. I dig it. Zone out to “Zombie” from Call Me Karizma below…

Michigan musician Cooper Claire wrote this indie ditty about riding a bike with a friend. How cute and summertime is that?! Claire takes us back to a a time “when friendship was effortless” and bicycles were our sole means of transport. There’s a lot of variance within the soundscape here so make sure you park it for the long-haul with “Pedaling” or, at the very least, hold out past the 90-second-mark when we catch that downhill speed.

This riotous act from the Netherlands combines Balkan influences with klezmer, folk, pop, and even a touch of reggae. Yes, folks, you read that right. Their new single “Va T’en Fou” is just a taste of what can be expected from their new album, Babel Fish. I just love this track. “Va T’en Fou” feels like a gypsy riverboat party on the Seine in Paris. Amariszi is definitely one of those bands I want to see live so let’s hope they’re ready to talk U.S. tour.

“Mississippi, Come and Take Me”

Despite the carcinogenic amount of sunlight in my early days, there’s a little bubble of nostalgia that gains extra glow when the weather warms. The Oklahoma City duo known as Syntax Club manages to capture that seasonal buoyancy in their beach pop sound on “Mississippi, Come and Take Me” despite their distance from the ocean. There’s carefree school-vacation feel on this single that calls for flipflops, cutoffs, and a boombox down by the river. Check out “Mississippi, Come and Take Me” by Syntax Club below…

When it comes to The Apaches, don’t just stop at one song. My suggestion is to start with “Pistoleros” and then work your way through all of Musica Surfica Vol. III & IV; the followup to 2016’s Musica Surfica Vol. I & II, of course. In fact, you could just go all the way back to Vol. I  & II to partake of the complete set (thus far). The Apaches add a splash of desert garage to their beachy surf sound. If you’re getting ready to light the tiki torches and grill up some Sonoran dogs, The Apaches have your playlist covered. You can sample “Pistoleros”, the opening track from Vol. III & IV, or you can just head here to score that complete album.