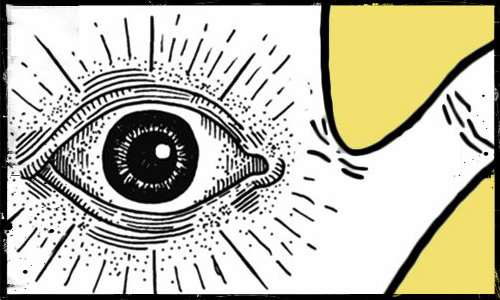 “The King is Dead”

Are you ready for the transcendental expierence that is The Fuzzy Crystals? These spaced-out pysch rockers from California (where else?) create a dynamic sound that will have you wandering through the acidic flower fields of our hippie parents’ memory mindspace with their new single, “The King is Dead”. If you feel like you might have missed out on Woodstock, I suggest delving into The Fuzzy Crystals right away.

How should we describe the music of the musical duo known as Swellshark? Sweet and somber? Lonely but playful? Sad and happy? It seems like all the words apply when listening to “Numb + Insensible”. Shélan O’Keefe and Henry Kellam (aka Swellshark) fuse together a buoyant indie folk sound with pensive lyrics that seek to root out all those insecurities you sought to subjugate. The pair are heading out on tour this coming June so check with Swellshark to see if they have a stop in your neck of the woods. For us in Phoenix that means The Trunk Space on June 3rd so mark your calendar!

The husband and wife team behind Joy Downer [Jeffrey Downer and Joy Bishop] are originally from San Diego but they recently made the jump to Hollywood. “Stranger Places” takes that casual Pacific air and adds some L.A. production for a super fun summer single. This track comes to us from the duo’s EP, Radio Dreamer, which was recorded and produced by Rob Kolar at his Echo Park studio. Check out the single from Joy Downer below &/or head here for the complete Radio Dreamer EP.

“We Notice Homes When They Break”

There’s something nostalgic about that early indie sound “popularized” in the 90s by alt-rock bands that had too much buoyancy in their sound for grunge. It definitely feels like Loyal Wife has continued the tradition on their new single, “We Notice Homes When They Break”. Loyal Wife has that bright bummer rock thing down and I’m totally digging it. Check out the single, available through Sunset Alliance Records, below…

This psych-rock act from North Carolina is passing through Phoenix in June and all you locals are not going to want to miss out on the vintage sound of Shadowgraphs. “Eastern Holiday” starts off with a bit of Western amble before giving way to a mellow and nostalgic rocknroll that is quite enchanting. Give “Eastern Holiday” a spin below and then be sure to check in with the Shadowgraphs’ complete tour schedule (through Facebook).*

*This sentence was modified from its originally published content because some writer got a show date wrong. The jury is out on whether to blame the band or the staffer. Trial to begin at noon.**

**That was a joke. There’s no “trial” other than trial by combat and that always starts promptly as dusk.