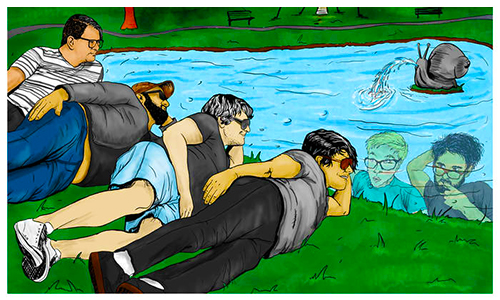 “A Change is Gonna Come”

Two Phoenix favorites – Genre and Snailmate – released a split EP back in April with this angsty number thrown into the mix. “A Change is Gonna Come” is a dynamic alt-rock hit in the making and the four feisty tracks on the Snailmate & Genre Split offer up some stiff competition on the stand-out-single front. On the one hand, you have the frantic nerdcore hiphop of Snailmate. And, on the other, the dynamic angst-ridden alt-rock of Genre. Thankfully, you don’t have to make the choice. Head in for Genre and stick around for Snailmate… or vice versa. It’s all good and will serve your spirits well. Check out “A Change is Gonna Come” below or head here to score the complete EP.

The musical duo behind Wildera recount a great tale of predestination. Rusty Redden and Loren Moore both grew up in the same Dallas suburb, but it wasn’t until they sat next to each other on the flight that would take them cross-country to attend the Berklee College of Music. They became bunkmates and, eventually, collaborators. Now reunited in Los Angeles, Redden and Moore release their catchy brand of alt-rock as Wildera. Driving guitars and disinterested vocals give “The Only” a hip feel that could really take hold with modern listeners everywhere. Give the new single from Wildera a spin below or get that digi-download here.

This new single from Lenina Crowne has easygoing indie-rock sound that pairs perfectly with summer. This five-piece from State College [PA] creates a nostalgic atmosphere with the crisp musicianship reminiscent of early indie rockers of the pre-grunge fuzz-free era. “Know” makes me think of pool parties and Otter Pops and creekside hikes that end at a familiar swimming hole. That’s an indie rock sound we could all stand to hear a little more of. Give “Know” from Lenina Crowne a listen below or get the three-track EP from whence it came here.

Spencer Anthony has a bit some pop-punk festiveness thrown into the alt-rock sound that keeps the energy (and the angst) turned up for “Happy Pills”. One might even go so far to say that Anthony has some emo leanings that come through in his vocals – both in the lyrics and their delivery. “Happy Pills” comes to us from Spencer Anthony’s debut EP, Words To Hide Behind, which dropped in April. Give the single a listen below and then move on to the complete EP here.

How to describe the sound of Vero? Industrial funk? Alt-pop? Whatever it is, the funky get-down sound of Vero has a gritty edge to it that we really dig here. The Swedish 3-piece released their debut single, “Hello”, earlier this month and you’ll be able to hear some 90s-reminiscent permutations in the soundscape on this track that make it particularly catchy. Let Vero say “Hello” to you with their single below…