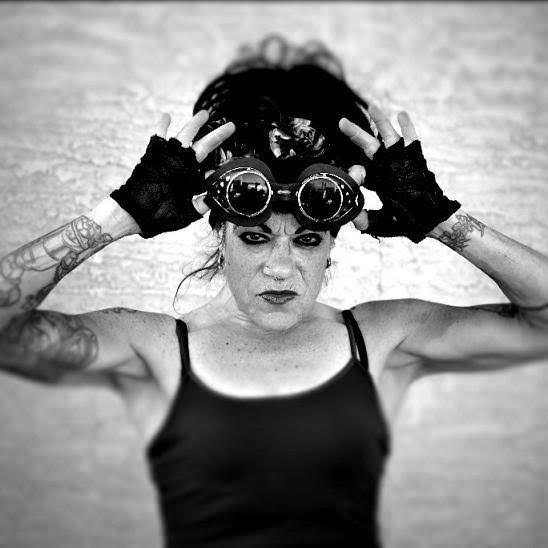 “bacpac”— (Jeremie Bacpac Franko). I do “bizarrechitecture”: Art and architectural design of the possible but still fantasized world. My medium is airbrush and aerosol, architectural drafting and photography.

2.How did you get your start?

It all started with a can of KRYLON and a Harmony Rocket guitar.

When I was 14, my cousin needed someone to paint “lace panels”and lettering on his Camaro, so I used my first cans of KRYLON spray paint. I started getting asked to put ART on cars in high school—rat finks, zodiac signs, etc. After school, I painted numbers on demolition derby cars for a local auto body shop where I learned how to prep and paint cars and bikes. Then a biker in my hood told me about the “airbrush” and I bought my first Paasche. I got into the custom bike and car scene pretty quickly with the airbrush and spray guns, and through customizing, I earned my college tuition. I went to Carnegie and got my BA in Industrial Design.

CONTINUATION: At the same time, I had been playing guitar since I was four, and I set up to go to London for the music scene by going for my Masters in Architecture in London. I knew I wanted to move over into a very non-conformist kind of architecture, so by designing scenery and set design, I could blend the design with the spray-painting.

I worked for a number of architects , video directors, and theater planners in London and New York and eventually went to LA and became a scenic artist. So to conclude, it all started with a can of KRYLON and a Harmony Rocket guitar.

“Living in the Grid”

THE GLOBAL: The INGENUITY OF MAN, and the interface of these creations with Nature: OIL RIGS and the sea; TRAINS and the desert; the pristine design of a twelve-cylinder ROTARY JET ENGINE and the elements; the AIRPLANE BONEYARD and time.

THE LOCAL: Random and beautiful graffiti = letters and colors with a message…the smell of spray paint sends me running in that direction, to witness some lone artist or a crew throwing up a gorgeous piece on a freeway wall.

The fact that very few people are actually FROM Arizona means there is the potential for great diversity in the culture. I have met more people from Wisconsin, Chicago, Mexico and Bosnia than I have met Arizonans.

And, The CANAL SYSTEM. I am completely infatuated with the canal system here; its engineering and the juxtaposition of habitat and the need for water. 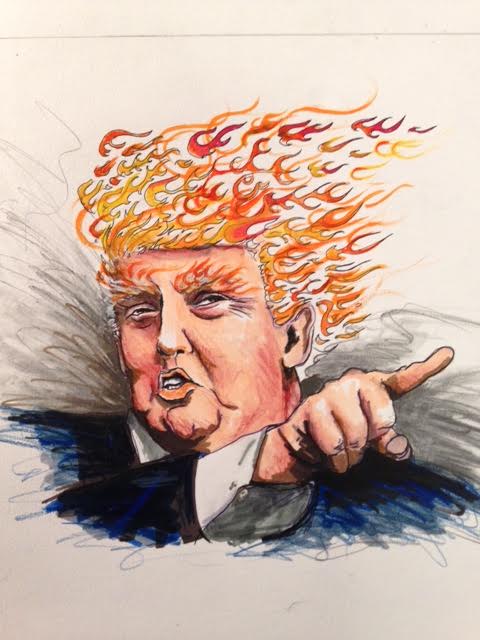 As yet I do not maintain a regular website or catalogue for my art and bizarrchitecture.

I have been in a variety of random art shows over the years and my design work was published in trade magazines and my architecture [as] a book; My radio show (I have a rockabilly radio show out of Phoenix Center for the Arts) is on Mixcloud and the photography connected with that program is on the Rockabilly Worldwide Mashup Facebook page.

I am one of the performers in the Arizona Storytellers and I was Featured Poet at the February {9} Gallery “Caffeine Corridor”.

PHOTOGRAPHY: IG: rockabilly_worldwide.
The “Selfie Project” is photography that is staged and shot by entirely by me to advertise my radio show. All the pictures have some element of radio, sound or something to do with electric power or music. 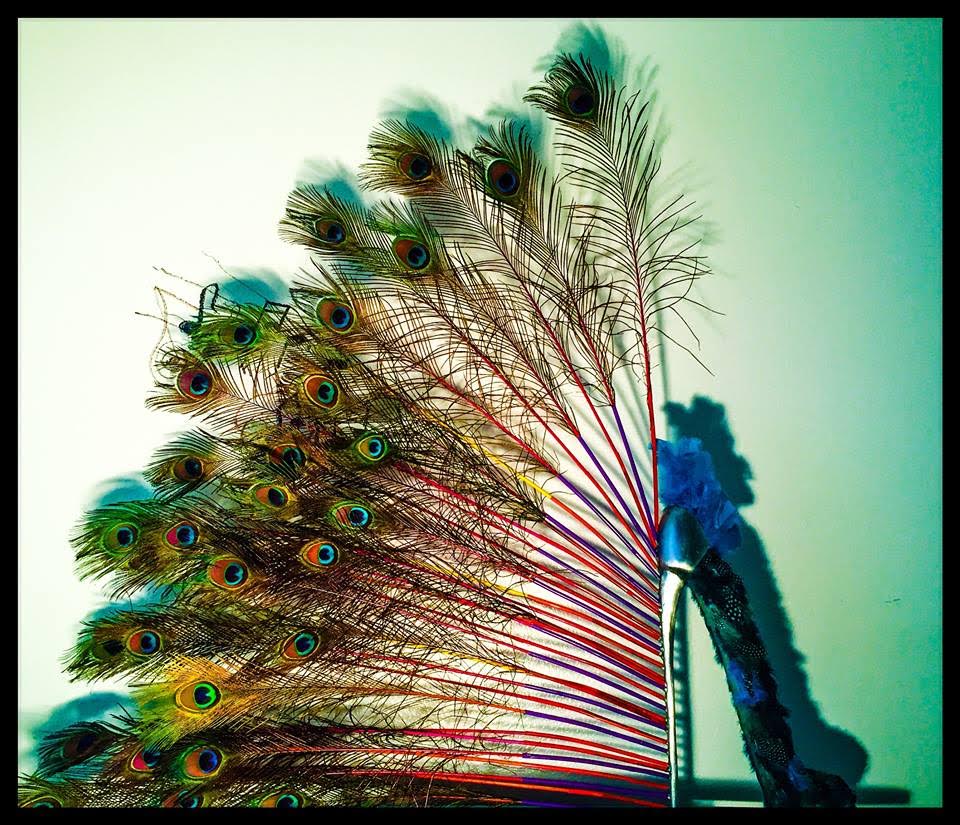 6.What would you like to accomplish before you die?

To bring a FILM PRODUCTION STUDIO on the scale of Hollywood—to South Phoenix.
DO ANYTHING I CAN to grow and support the art scene here in Phoenix.
Get in on the ground level to BUILD A GREAT SOUTH PHOENIX where there are jobs and art and music which supports and enhances the community who built it…
END the prison system (prison radio was a big part of what I did in New York). Start a composting company based in South Phoenix.
Personal: WHEN I HAVE ACCOMPLISHED THAT, move back to the UK and paint like George Sheeler, play guitar like Charlie Christian.
7.What is your mantra?
“To thine own self be true.”
and

“What you think of me is none of my business.” 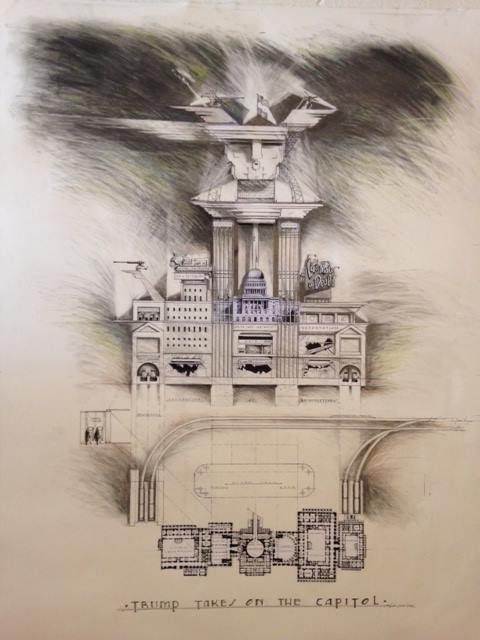 “Trump Takes on the Capitol”

“Trump Takes on the Capitol” (Detail) 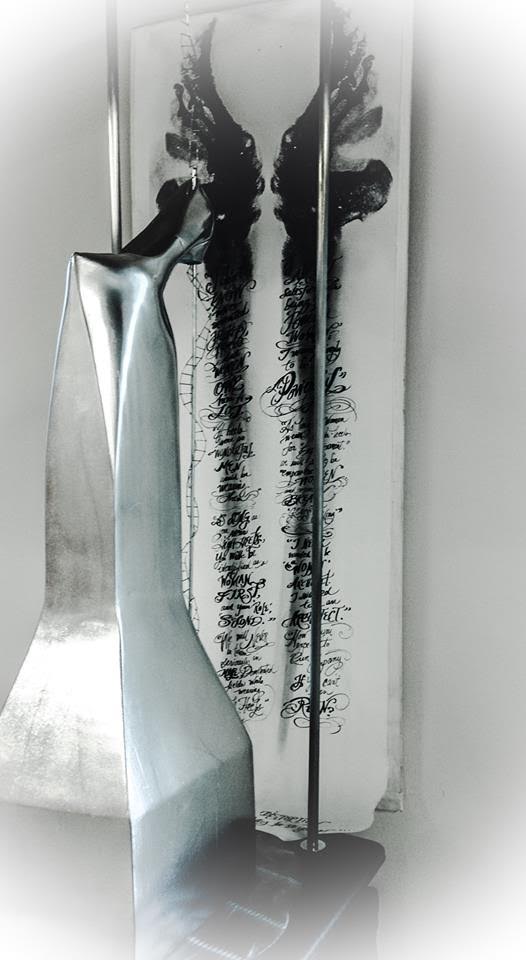 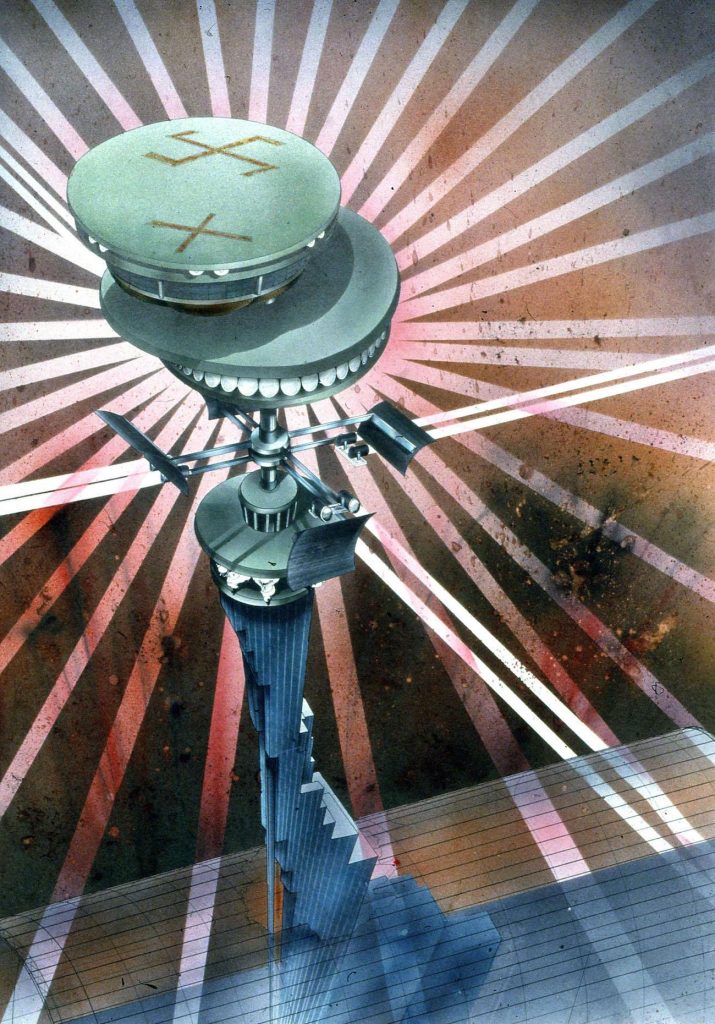 “Between Land and Sea”