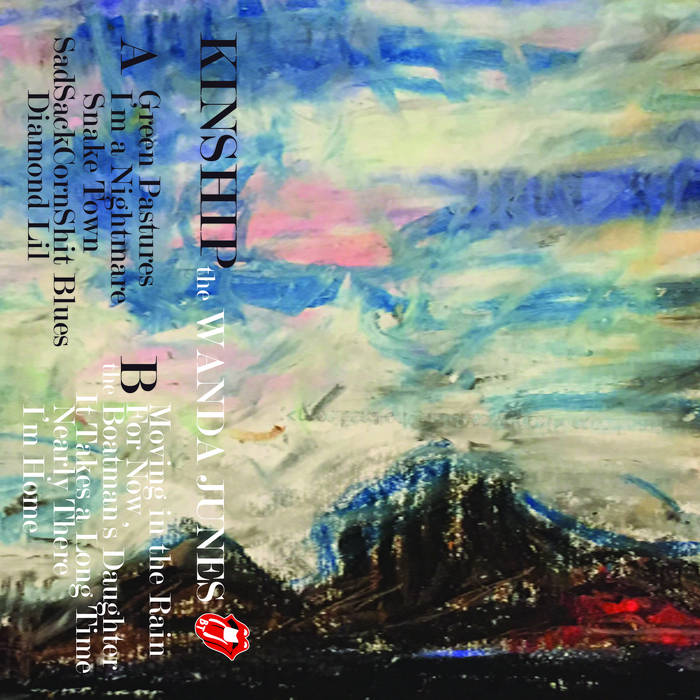 The Wanda Junes journeyed up from Tucson to record a new album at Fivethirteen Recording in Tempe and the band carried the feel of that dusty desert divide they traversed straight into the studio. Kinship, much like its title suggests, has a familial, kitchen-table atmosphere. The album sounds like a bunch of old friends (of really talented, musician-type friends) hanging out while hashing out some tunes.

The singing (and songwriting) duties get passed around the table which only adds to the communal feel of this recording. One person tells a story and then the next recounts a tale. From the rambling ballad “Green Pastures” to the wry look at acceptance offered on the album’s closer, “I’m Home”, Kinship offers listeners a storybook of Americana.

I find I’m rather taken with the bittersweet sound of “For Now”, but Kinship glows with an interior warmth from beginning to end. There are moments of humor and sorrow and joy to be uncovered in the homespun stories of The Wanda Junes.

I’m just starting to wonder… do you have to play an instrument to hang out with The Wanda Junes’ crew? I mean, can you just bring some snacks to share and take it all in? I suppose I’m willing to take the next best thing: hanging out at my own damn kitchen table with the music of The Wanda Junes. You can do the same. There are still some copies of that limited edition cassette available so head here to score your copy.

I had the opportunity to ask Bobby Carlson of The Wanda Junes about the new album, communal songwriting, and what this Tucson band has in the works next. Check out our chat below. But, first, take a gander at the new album, Kinship.

YabYum: Quite a cast of players you’ve gathered. How did The Wanda Junes join forces for the greater musical good?

Bobby Carlson: It hasn’t been the smoothest process. And not the most exciting tale.

I moved from Flagstaff to Tucson in June of 2012 to start the Wanda Junes with Steve Soloway. We had already begun sending recordings to each other and when Steve recruited Jesus Robles, we had a set of songs and he fit right in. A year later, we had our first album Factory Plaza finished, Jesus had bailed, and Steve set off to Maine to start his family.

The band actually played a “last” show and had every intention of breaking up. By then, we’d picked up Thom Plasse and Jeff Henderson, and, at some point, the three of us decided to just keep going, or to try, at least. We played one show as an acoustic-ish trio, but by then Adam Frumhoff, an old friend from Flagstaff had joined, and we had recruited Karima Walker soon after as well. That was just to play banjo. How little we knew!

We recorded half of Hi Fi Record Album and then Allison McGillivray joined and she helped us finish it (she actually introduced us to Karima). Later, Karima quit, and we got Nathan Fenoglio. We recorded Kinship and Allison quit to go save the world from nuclear annihilation, and Nathan quit to save his world. My old roommate, Tony Ballz moved in with me, and naturally into the band. When Allison and Nathan left, we were demoralized and unsure of what was going to happen. We got writing and things currently feel solid, like a car commercial with a Bob Seger soundtrack…

I noticed that the band makes the trek to Tempe to record over at Fivethirteen. We love that studio but I’d like to know what keeps you coming back?

Well, we love it too. I was introduced to Catherine through Abe Gil and Owen Evans, separately and together, when I still lived in Flagstaff, and it’s been my go-to spot ever since. I get the impression that they like working with us. I wish we had the budget to just have a standing weekend with them every other month or something. The recordings that I’ve done there, if I’m unhappy with anything, it’s either with my songwriting or the performances. It’s always on my end. At this point, it’s really comfortable, which when you’re recording, is pretty important. I’m perfectly happy making this entire interview a testimonial for Fivethirteen.

Songwriting and vocal duties seem to be shared amongst the band members. I would imagine that lends to the sense of camaraderie. Is that the result? Does the band feel more like a gathering of friends than perhaps other bands you might have played with?

It is a gathering of friends, which is the only way I’ve ever done it.(Somehow it’s still stressful at times.) I’m not a good enough player to do it any other way. The result, we all hope, is a better record, and a better live show. Nothing more exciting than white dudes playing guitars, am I right?

Can you tell me a little about how the band approaches songwriting? Does it vary per person?

It does vary. Adam and I are the two main songwriters right now, and the process is a little bit different with each song. But the songs are arranged by the band, and it’s pretty rare for there to be a lot of notes from the songwriter when we’re all writing our parts. The strongest songs, or our favorites at least, have been ones with the heaviest collaboration, which is good news for all those co-ops and communists out there.

What’s next for the band? Writing new songs? Shows? Tour? Music video? Please tell us all the things.

We’re playing some shows around Arizona, trying to put this Kinship album on all the top ten lists. We’d love to release the album on more formats. We’re recording at Midtown Island [in Tucson] at the end of April. (We still love you, Catherine!) We’re thinking that will be the beginning of our next thing–either as a single or several [singles], and/or the beginning of the new album. We just stay focused on songwriting and we hope the rest takes care of itself.