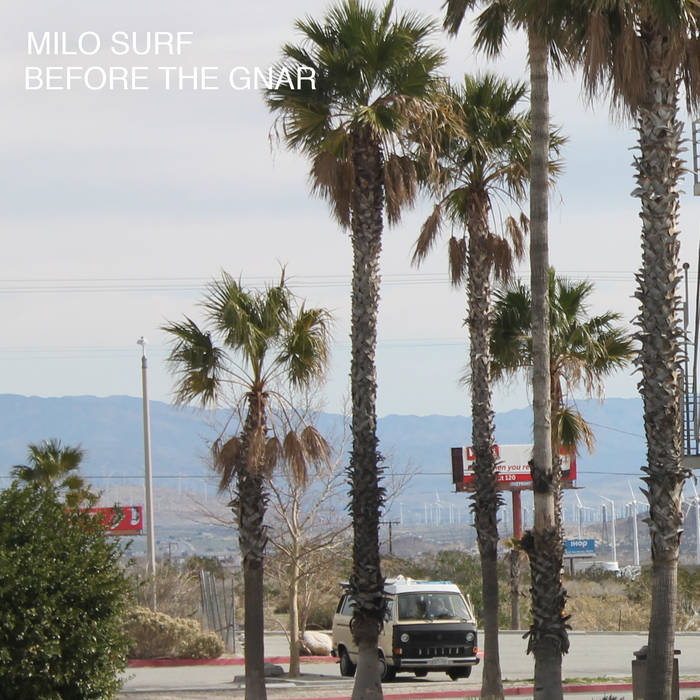 The only bio description on Milo Surf’s Bandcamp is a simple phrase: “I can’t surf.”

That funny bit of winking self-deprecation is actually the perfect introduction to Milo Surf, a project by Gilbert songwriter Joshua Capati [of Phantom Party fame]. The music is all surfy echo pedals and snoddy vocals, with plenty of revealing personal details and a wry sense of humor.

“Cherry Bomb” starts the record with a 55 second blast of surf punk perfection, giving way to “Stellarphonic Melancholy,” the standout track from the EP. A full-throated croon that sounds a bit like Nightmare of You, finds Joshua Capati singing, “I glamorize/The science of suicide/’Cause it crossed my mind/I got some new wounds for the Sun rays to cauterize.” It comes off a lot more melodramatic than it looks when written down.

Any song that can match reverb guitars with a “ohh ohhs” has my seal of approval, and “Orange Crush” is as sweet and bubbly as the soda that bears the same name. Plus it contains the line, “I’m so sorry that I’m not attractive/I wrote this song in hopes of making things happen.”

“Liv” plays with punky doowop while name dropping Dr. Who, Weezer cassette tapes and Tempe Town Lake, and “Maybe Baby” is a classic pop song Buddy Holly would write if he lived by the beach.

Milo ends the EP with a somber rendition of the The Everly Brothers’ “All I Have To Do Is Dream” which sounds much more wistfully when delivered in Capati’s croon over a softly strummed surf guitar. It’s a sweet ending to a quick fun record. Check it out below.