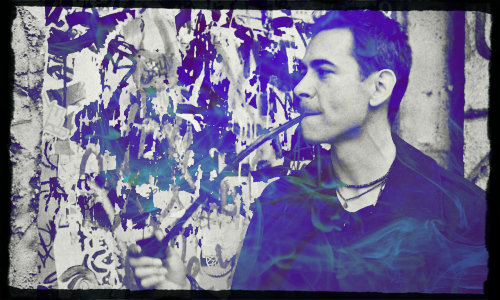 “On Drugs and in Love with You”

Philly songwriter Nam Wayne dropped a s/t LP in February and this little gem of a tune comes to us from that release. “On Drugs and in Love with You” has a lighthearted energy that differs from a lot of the other tracks on Nam Wayne, the album. The lyrics in the hook, “I’m just a mad mad carrot eating fool on drugs and in love with you,” lead me to believe that the author might actually have been in exactly the state of mind he claims when this single was penned. Even at his most cheeky, Nam Wayne crafts songs that beg for a revisit. Give “On Drugs and in Love with You” a listen before &/or head here for the complete LP.

This experimental folk group from Philadelphia has a dark, swampy feel. On the Water either draws inspiration from the music of Tom Waits or they must wrestle alligators. Are there even alligators in West Philly? The vocalist for On the Water has a grizzled sound that matches the gloomy atmosphere of that pervades their new single, “Sun Temple”. The combination has a stoic, if somewhat foreboding, feel that reminds me of The Handsome Family. “Sun Temple” marks the first single from the band’s forthcoming release, Superposition, which comes out later this month (4/21) so make sure you get that pre-order in STAT! You can check out “Sun Temple” from On the Water and pre-order the band’s new album through Bandcamp here.

Ryan David Orr has called quite a number of different places home including Ashland (OR), Nashville (TN), Asheville (NC), and, currently, Lakeside (AZ). Moreover, as a musician, Orr has traveled all around the United States. So maybe it’s not quite surprising that his own sound feels a bit like a melting pot of different styles: West Coast Folk, Nashville Alt-Country, Portland Indie, and Blues stretching all the way from the Mississippi Delta to Chicago. “Mississippi” comes to us from Orr’s 2016 release, kopascetic, but rumor has it that the artist is currently at work in the studio. I’m definitely looking forward to hearing what Ryan David Orr has in store for fans this year. In the meantime, you can check out “Mississippi” below. And head here for the complete album, kopascetic.

This mellow number from Swedish songwriter Simon Alexander has an-almost-sludgy pace that feels totally appropriate given the song’s title, but “Mud” rises up to encompass the listener with so subtly they barely notice the surface as it draws ever higher. Alexander applies morbid touch to his songwriting on “Mud” which blended seamlessly with his bluesy brand of orchestral indie-folk. Yes, think bluesy-orchestral-folk. Now imagine that working out for us. Check out “Mud” from Simon Alexander below…

This Canadian singer-songwriter has a bit of a mournful hue to her voice that is well-suited to her somber lyricism on “Secrets”. The sparse instrumentation gives space for Kent’s brooding voice and story-telling sensibility to take the central focus. This young artist certainly has a running start on her peers. We’ll try to keep up. Give “Secrets” from Lizzie Kent a listen below. This single is one of three tracks that appears on Lizzie Kent’s self-titled EP so, if you dig what you the song, check out the complete release here.

Ryan Moore is the singer-songwriter behind the moniker, Quiet The Pilot. The L.A.-based artist released this dreamy indie rock number a couple months back. “Red Dolphin” uses subtly lush instrumentation to create a soothing, slightly whimsical air that carries the lyrics to their audience. And, as an added bonus, Moore’s lyricism often includes a little droll humor tucked away for the astute listener. Give “Red Dolphin” from Quiet The Pilot a listen below…