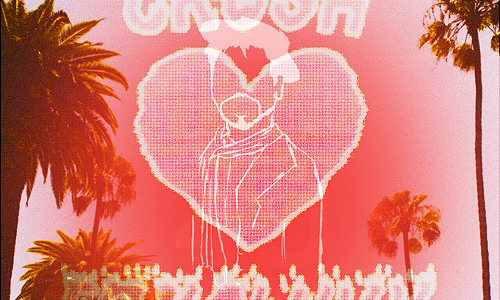 The Fontaines might describe their sound as “New-Wop from L.A.” but I would definitely cite more New Wave influence than Do-Wop on their latest single, “Vacancy”. Ethereal vocals and a chill pop vibe make for a seriously catchy number. “Vacancy” comes to us from The Fontaines’ forthcoming LP which is currently in the works and the Los Angeles act just made their SXSW debut this year so this is one of those band’s you’re going to want to pay attention to. Big things in the works for The Fontaines.

So, when I first heard this track, I saw that it was demarcated as bedroom recordings of “goth synth music”. Perhaps, it goes without saying that I was wary going in, but thank goodness we have that strident “listen to all things” policy here or I might have passed right over the jewel that is Black Fly. The somber, but also uplifting, single from the Vermont artist known as Black Fly combines an elaborate synth soundscape with brooding vocals as the songwriter ruminates on toxic persona. “I Don’t Know” carries a sense of ponderous isolation and the emotional highs and lows that can be found in that secluded space. I’d tell you to follow Black Fly to keep watch for new singles along with me, but he’s not playing that social media game. Maybe the isolation fuels the music-making.

VVAves, not to be confused with WAVVES, is 21-year-old Canadian musician Emma Sophia Rosen. The self-taught songwriter and producer shows some tremendous potential on “Fall Apart”, her first original single. The mellow beat and nimble vocals will entrance the listener so they might glaze right over the production’s crisp, radio-ready sound – an accomplishment in and of itself. During those first fifteen seconds of “Fall Apart” you might think you’re in for a grrl’n’guitar, but this song offers much, much more. I expect this is just the first I’m hearing of VVaves’ Rosen.

The Canadian trio known as I M U R creates hallucinatory electropop perfect for drifting out of mind and body on those sweltering summer afternoons drawing ever near. On their new single, “Swirl”, it’s the dreamy vocals of Jenny Lea that drives the song and its musings on love. The underlying music is minimal but smartly layered to give shape and structure to “Swirl”. Chillax with “Swirl” from I M U R on those hot and hazy days of summer. If you dig this single, I suggest checking out the band’s LP, Little Death, which came out in March and features “Swirl”.

French artist PARC now calls Los Angeles home. For his latest single, “4U”, PARC explores the terrain of his locale and the population that peoples its streets. The music on “4U” comes across as bright and buoyant with an easygoing energy. Basically, it’s everything SoCal. I can already tell that PARC is going to fit right in. Float in the relaxing atmosphere of PARC’s “4U”.

The London songbird known as Foxgluvv dropped her sultry single, “crush”, earlier this month. Fusing sedate and smokey vocals with a hypnotic sound will put you into mellow mode after just one listen. The lyrics are more cool than confessional; giving on space to appear both interested and aloof at the same time. “crush” marks the first single from Foxgluvv but I’m hoping there are other tracks in the works. Until then, kickback with “crush”…

Bea Box is the stage name of Montréal artist Joannie Labelle. There is a lot of tension in the sound at the start her new single, “I am quiet”, that will wax and wane as the track progresses. This tension works well with the sense of calm that pervades the whole song. Bea Box seems to lean more toward avant-garde end of electropop rather than seeking to scratch out radio hits and I like that about her. You’ll find more than a calm and dreamy number on “I am quiet” (even though it’s that too). There are some interesting aural elements Bea Box cultivates within the sound of “I am quiet”. Experience it for yourself below…