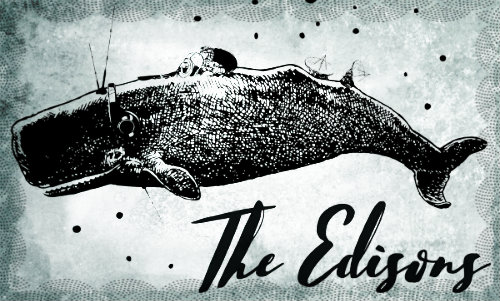 The Nashville band known as Welles is set to break big so you should check out this single so you can say you knew them when. The band performed at SXSW and they’re on the bill for Bonnaroo, but it might be this single that pushes them into the mainstream. “Life Like Mine” offers a slouchy vibe and sharp musicianship while catchy, Sgt. Pepper-made-modern vocals (provided by Welles’ frontman, Jehsea Wells) seal the deal on this hit-in-the-making. Give “Life Like Mine” a listen below…

“5 Reasons I Stopped Drinking Tequila (and Why I Started Again)”

Woah, did we almost miss the bus on this release or what? Phoenix 4-piece, The Edisons, released their debut, Space Whales, back in October and we’re just getting to it now. Don’t judge. We’re busy. These feisty alt-rockers get downright gritty at moments on “5 Reasons I Stopped Drinking Tequila (and Why I Started Again)”. But The Edisons like to keep their sound dynamic so expect some shifts, not only on this single but on Space Wales as a whole, as you move from start to finish. They are seeking to explore their sound on this first release, not to define it. Make sure you check out this single and, if you dig what you’re hearing, I highly recommend diving into Space Wales.

This alt-rock quartet from Santiago, Chile now divides their time between there and the U.S. and has made the jump from South America to Southern California. Honey-sweet vocals over a sludgy sea of shoegazy rock on their single, “Forever Together”, brings me back to my 90s-era youth; a nostalgic time for me of grumpy baristas and Juliana Hatfield. This single is just the first from the band’s forthcoming EP, Ultraviolet. I’ll be keeping watch for that release. And maybe after you give “Forever Together” below, you’ll be a Slowkiss fan too.

I can imagine this new single from Absofacto really catching on with alt-rock radio stations across the country. It has just enough of an electro-pop punch to really hit home with contemporary audiences. Of course, once it starts to enjoy that regular radio play, I’ll probably start to hate it, but right now I’m jamming “Lights Outside”. The track premiered with Earmilk back in February and enjoyed some HypeMachine attention early on, but my guess is that we’re just hearing the start of Absofacto. Hop on that fan-train early and give “Lights Outside” a listen below…

The SoCal act known as Hunny puts a sunny pop-punk spin on their alt-rock sound that makes it perfect for warming weather. “Shy” marks the first single from their forthcoming collection. The energy on “Shy” can buoy your spirits in the middle of a rough week so it’s no surprise to us that , even though it only dropped last week, it’s enjoying some serious early attention from listeners. HUNNY plans on setting out for tour with Bad Sun soon so check for dates in your area. But, first, give “Shy” a spin below…

The Brooklyn duo, comprised of Molly Murphy and Jenni Lind, goes in for that raw, emotive sound first popularized by the alt-rockers of the 90s: something gritty and a little aggressive. Maude Gun calls their debut single, “On High”, a “mystic-folk riot grrrl anthem” and that description pretty much hits the head on the nail. There is something simultaneously earthy and otherworldly in Maude Gun’s sound. Give “On High” a listen below…

The Danish indie rock trio The Great Dictators combines forceful guitars with hazy vocals to erect a wall of shoegaze sound on their new track, “Blood”. The Great Dictators stomp all over the divide between post-rock and alt-rock; allowing elements from both traditions to seep into their own brand of indie. The effect is a hypnotizing blend of textures and sounds that you can really sink down into. “Blood” comes to us from the band’s new album (due out later this year). I’m definitely interested in hearing more of what The Great Dictators have to offer.