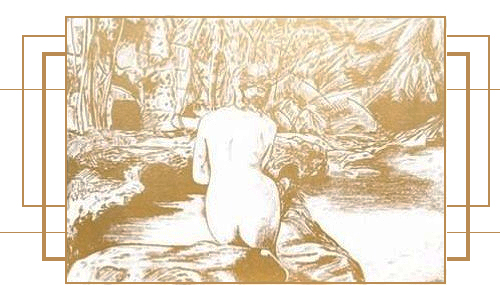 Ben Zaidi certainly has as promising a start as any artist could hope for. After growing up in Seattle, Zaidi moved to New York City before attending Harvard University to study music and creative writing. The new single from the artist, “Irene”, is soulful and soft-spoken. The minimal texturing keeps the track’s focus where it belongs: on Zaidi’s subtly emotive voice and the poetic narrative within his lyrics. This is definitely a songwriter to watch. Give “Irene” a spin below and, if you like what you’re hearing, delve further into Ben Zaidi’s online musical offerings through Soundcloud here.

Singer-songwriter Julia Lucille might be a California native, but she spent time in Portland studying music at Lewis and Clark College before moving to Austin, where she currently resides. I can definitely see Lucille’s ambient-folk sound doing well in any one of the aforementioned locations. There is a desolation that can be heard on “Eternally” that denotes a Western sensibility – something a little mystical yet still a little hopeless. “Eternally” comes to us from Julia Lucille’s forthcoming album, Chthonic, which comes out on April 7th so mark your calendar. Before that happens, sink down into “Eternally” below…

“Woman (One of These Days)”

Jordan Prince made the jump over the Big Pond, bringing his Louisiana folk all the way to Munich, Germany. His new single, “Woman (One of These Days)”, comes to us from Prince’s upcoming ep, No Manual. I love the simple, earthy sound and easygoing attitude. The lyrics don’t really describe your typical romantic sentiments, as the title might suggest. Instead, the author suggests the subject delves even further into “man’s perverted obsessions, and how he can’t control or forgive his own guilt as he becomes self aware of his action.” Despite the weighty topic, Jordan Prince keeps his melody lithe. Listen to “Woman (One of These Days)” below…

This Costa Mesa artist has a distinctly coastal vibe in his indie-folk sound. Stevie Talks claims “Pollyanna” is about “a girl [he] cannot stand” but I think the songwriter might be a little conflicted on that particular point. In the same breath, “Pollyanna” comes across as anguished and wistful, but with enough bounce to keep the mood light. Give the single a spin below and, if you like the summery sound of Stevie Talks, you can move on to his previous single “LYM (Leave Your Man)” which came out a few months back. Let’s hope more songs are on the way.

The North London singer-songwriter who goes simply by the moniker Sasha creates ambient dreamscapes of sound. On her new single, “Gracious”, Sasha sets her nimble voice afloat the gentle current of a stark yet beautiful arrangement. “Gracious” is the perfect song for a mellow and meditative morning. Or perhaps you can find four minutes to zen out with the single before launching into your litany of tasks for the day. I can almost guarantee a calmer sense of being will stay with you throughout the rest of the day. Listen to “Gracious” below…

The Swedish musician known as Alessandra not only wrote and performed her new single, but she also produced the track. That’s rather ambitious for any young artist, but Alessandra pulls off the feat with great success. On “The River”, powerful vocals are met with equal energy from the underlying soundscape. “Your River” marks the first single from Alessandra’s soon-to-be-released debut EP.  This emotive number centers on an experience of bittersweet summer love. And, for anyone who’s been there, you feel the sudden return of those heart-wrenching highs and lows as you listen to “Your River”. Which you should do. Right now.

London singer-songwriter Carmen Rosa is gearing up to release her debut EP with this new single. “Wild One” combines smokey vocals with an aural landscape that has a cinematic feel. I can easily imagine this song playing as a dramatic scene carries out on the silver screen with slinky satin dresses and plenty cigarette smoke. This is a promising start for the EP to come from Carmen Rosa which should be available next week (March 31) through Hometown Records. Until then, enjoy “Wild One” below…