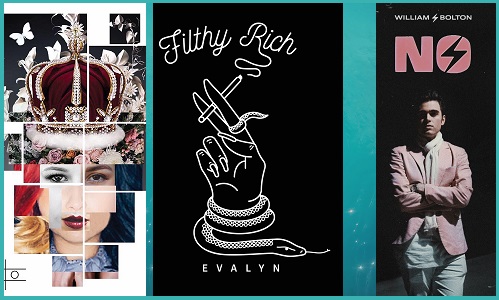 The Houston-based quintet known as Passerbye dropped their EP – Apathy, TX – earlier this year, just in time for the Superbowl. Now that may not seem like an important connection to draw but the band was picked up to play the Superbowl Festival sooo one might expect big things to come from Passerbye. “Karoake Knife Fight” comes to us from that release and you can tell from the punchy hooks and crisp delivery that it was predestined to captivate contemporary audiences. Give the single a spin below and you’ll hear what I mean. “Karoake Knife Fight” just might be radio gold. For the complete release, head to iTunes here.

The Calvillo Sisters throw some vintage style into the musical mix on their new single “Come Through”; the first single from their forthcoming album, Ziklag. Emma, Angelique, and Dominique Calvillo – yes, who are actually sisters – grew up in L.A. so they were in just the right place to launch their fresh revivalist sound that might best be described as “pop gumbo” for its melting pot combination of pop, R&B, gospel, and jazz into one funky fluid sound. Give “Come Through” a listen below and join us in the wait for Ziklag by the Calvillo Sisters.

Evalyn was introduced on Louis the Child’s “Fire” and now she’s ready to branch out on her own with “Filthy Rich”. Whether the songwriter assumed a persona for this song or Evalyn really is as filthy rich as the track describes, I can’t really say, but I’m a poor writer and I’m still kicking the track around. Maybe that’s because of the slick hook and brooding “California noir” style. “Filthy Rich” by Evalyn just might be the next chill club kid jam. You can hear it for yourself below or head here to add the single to your personal playlist.

William Bolton give shape to this lively number with a chillax feel and his easygoing vocal style. There’s a casual air to the song’s delivery that seems to contradict the firmness of the title. But, seems to me, like this track might have been penned at the point when one really is finished – finally finished – with that relationship that’s not working out. “NO” was produced by the artist with Mischief Boy on the assist. The two worked on another track recently (“Be My Bae”) which is also available through Bolton’s Soundcloud page. Before you check out the new single, make sure you give “NO” a spin below or get your own copy from iTunes.

This addition to our list is an cross-Pacific undertaking. The Australian-based producer known as filous joined forces with Nashville-via-Eugene singer-songwriter Mat Kearney to create “Goodbye”. What I perhaps like most about this track is the subtly shifting soundscape that supports Kearney’s stirring voice. The production is vibrant yet unobtrusive and it keeps the track compelling without upstaging the vocals. Give “Goodbye” from filous, and featuring Mat Kearny, a listen below or head to iTunes for your own copy of the single.

This high-energy track comes to us from the indie/electro side of the pop pool. KNGDAVD combines the efforts of two NYC artists: one a producer/multi-instrumentalist and the other a vocalist. “Medicine” packs a pop punch and an infectious hook so be warned that this song could get stuck on your head in repeat. The subject matter addresses the hot button issue of toxic relationships that rely on sex to avoid the dysfunction. The steamy single dropped in January so you can score your digital download of the single here or give it a spin below…

Man, why are so many pop songs about troubled relationships? Is romantic love really the driving force of our lives? Or are we just suffering for our entanglements? This chill electro pop single has a pensive air felt in both the lyrics and the underlying musicality, but there is also a sense of calm resignation that keeps things on an even keel. Retro-style synths are used to add some vibrant texturing, but their presence does not overwhelm the track, leaving it feel dated and artificial. Other fans of similar synth sounds would be wise to take note. Give “We Don’t Talk Anymore” a listen below or head here for the download.