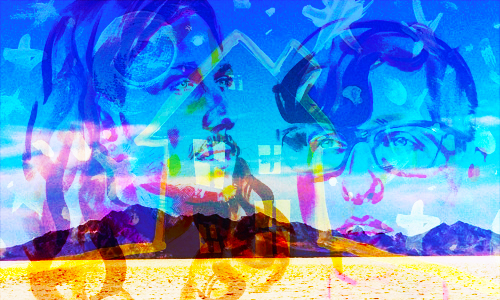 Tucson’s Jesse Henderson, who records under than moniker Jesse Konrad, undertook this new musical effort following the breakup of his last band, Fischer Kings. Dropping the surname for the middle one, Jesse Konrad follows the indie-folk of the artist’s previous project, but on his single, “Cruise Ctrl”, Konrad achieves deeper levels on introspection that is matched by the emotional charge of the song’s orchestral sound. This track comes to us from Jesse Konrad’s 2016 EP, Masks, which can be found here. I highly recommend taking this single for a spin. “Cruise Ctrl” is an inspiring punch right in the bad attitude.

This just might be my chill summer jam. Right now, I’m imagining myself wandering through my home on a lazy afternoon (dressed entirely in pastels) with a cocktail in my hand (not that I drink) listening to this track on repeat. The cocktail is also pastel. The Seattle duo known as Sisters shape out some seriously stellar electropop on “Honey Honey”. As the single kicks off, you’ll notice the minimal approach on texturing, but the sound slowly swells until you’re in full-on Mod lounge mode. Sleek and clean from start to finish.  Sample “Honey Honey” below or head here if, like me, you need that digi-download.

So Mateo Katsu is a bit of an editors’ favorite down here at #YabYumHQ. Maybe it’s his raw but never rough sound or maybe it’s the refreshing candor of his lyrics. Whatever it is, we’re hooked.  “The Glow” proves a little more hopeful than other tracks we’ve featured from the musician, but that might have something to do with the song’s subject matter. According to Katsu, “”The Glow” is about life as a participant in various warehouse communities, not unlike the recently departed Ghost Ship in Oakland.” For artists, these communities do stand as a beacon of hope; a place of possibilities. But, as anyone who has actively participated in the rapscallion life of an artist will tell you, it’s not always peaches and cream. Katsu explores some of the frustrations while celebrating the optimism in “The Glow”. Give the single a spin below or head here to procure the album from whence it came.

This garage rock quartet comes to us from New Orleans. Killer Dale derived their name after watching Pineapple Express. Yep, that movie with Seth Rogen. And, once you hear “Under Control”, you probably won’t be surprised by the origin of the band’s name. “Under Control” has that summer-stoner vibe that comes through on ambling guitars and the grungy, basement rock sound.  This single first appeared on Killer Dale’s December release, act as if, which is available for streaming or purchase here. But first, check out “Under Control” below…

The Philly 4-piece known as Loverboy Wanderers released their debut s/t dropped last month and the (almost) five minute track “Ghost” can be found there. Although, this isn’t that version. No, the indie rock outfit released an abridged version of their slinky single following the album. “Ghost” starts off with a bit of a brooding atmosphere but that soon gives way to an angsty energy that keeps the song lively rather than sulky. If you dig the abridged version of “Ghost” you can check out the full version on Loverboy Wanders, the album, here which is available for preview and purchase.

Water Color Weekend, an indie act out of Santa Cruz, crafts an effervescent ditty that will soothe then lift your spirits with “Strawberry (State of Mind)”. For those of you that are wondering just what a strawberry state of mind is, the band explains that a person’s strawberry is an “object, action, or anything else that puts you in a place of escape.” Maybe, this song will prove to be your own personal strawberry with its mellow but effervescent energy. Water Color Weekend recently dropped a brand new EP full of fresh sounds (available here), but, first, let the chill vibe of “Strawberry (State of Mind)” surround you in a comforting blanket of sound. Give the single a spin below.

Matt Reagan’s new single has a dreamy, psychedelic hue that reminds me of the musician’s bay-side home-base of San Francisco. “Not a Problem” fuses together fuzzy guitars and layered vocals for a richly textured sound that could easily fit in at The Filmore West (tambourine included) or with any modern indie fan. “Not a Problem” even goes so far as to disseminate into a brief jam session in true homage to the psychedelic sounds of the 60s after the two-minute mark. Give “Not a Problem” by Matt Reagan a listen below…