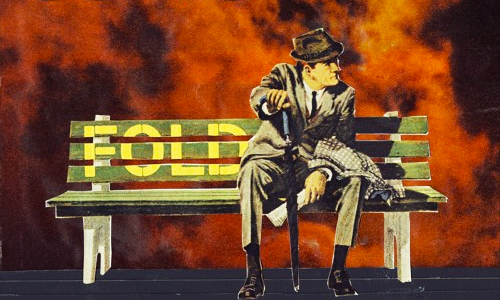 There seems to be a holy trinity of musicians that sits at the center of Austin’s Hollow Coats but additional players help flesh out the sound on the band’s new single, “Fold”. And the sound here is fleshy: opulently layered and packing a hefty punch on the production. But, what really sold me on “Fold” were the atmospheric vocals and the haunting beauty of the lyrics they delivered. This is the debut single from Hollow Coats so let’s hope more releases are in the works – and soon! Give “Fold” a spin below…

This indie/alt act from Phoenix is making some waves in our dry desert. Yes, The Ricky Fitts only launched their sound only last year and they’ve already scored some pretty notable gigs since their inception. That might have something to do with their slick, radio-ready sound. “Nightmare” comes to us from the band’s debut LP, The Great Beyond, which dropped at the end of January. Infusing electropop and alt-rock elements with a hefty splash of revivalist New Wave, The Ricky Fitts craft out a fun sound on “Nightmare” that has enough of a dark overtone for all you brooders that still want to dance. Take the single for a spin below or head here to check out The Great Beyond.

“Stay with Me” is the opening track from Soft Animal’s concisely titled EP1 which they released last month. This single has a lofi psych-rock sound with a little bit of garage grit that will come in more as you continue through the full EP. The sound descends into moments of intentional disarray before meandering back to a more structured, but never too structured, sound. Check out “Stay with Me” from Soft Animal below or head here for that digi-download of EP1.

I really loved the grrrls of the 90s alt-rock scene and Brixton’s Bryde just might fill that hole in my life. On “Less”, Bryde moves between breathy angst to full on fury over grungy guitars. All you PJ Harvey fans should definitely spend some time with Bryde. If you want to delve further into what this artist has to offer, I suggest moving on to “Back to Believing” – a new, and gentler, single that is really quite enamoring. Get your growl on with Bryde below…

If you like your post-rock with an extra heap of melodious sorrow, Bucolic is for you.  “Cold Clean” sets a somber scene that reminds me of a street lined in freshly fallen snow on a morning you have to be at work before 5 AM. Sure, it’s beautiful, but one’s inability to pause and really take in that moment lends an existential anguish to the biting cold. “Cold Clean” is beautiful, but it kicks you when you’re down… and I, uh, mean that in the best way possible. Bucolic is the brainchild of NJ artist Seth Carpenter and this single is part of an impending release that is due out in April so get on that Bucolic bandwagon sooner rather than later. Start with “Cold Clean” below…

The band known as St. Tropez is not actually from St. Tropez but Amsterdam. Their lively new single, “Democracy”, clocks in at under two minutes but there’s a lot of energy crammed into that time. The texturing gets heavy, but not in a full-on post-rock way. No, the vibe on “Democracy” stays more NYC scene rock than secret warehouse show. This single opens Debate, band’s 2017 EP, which (btw) does go full-on post-rock at moments. St. Tropez has enough of an experimental edge to keep things really interesting without ever totally abandoning form entirely. And, there’s a bit of a political slant that those of us in present-day Amerika can really appreciate. Give “Democracy” by St. Tropez a listen below…

The alt-rockers from the ATL known as MYFEVER are gearing up for a new recording effort with the release of their latest single, “Golden”. Though the trio calls Georgia home, you might get a bit of a L.A. or Long Beach vibe from “Golden”. And, when I say Long Beach,  I’m talking in the alt-indie vein of Cold War Kids… not Sublime. MYFEVER will hopefully be hitting the studio soon to lay down Born for Spaces, their next album. Until then, spend some time with “Golden”.